The part of the exhibition in the display windows of the gallery can be viewed unlimited between 24 December 2020 till 27 January 2021. 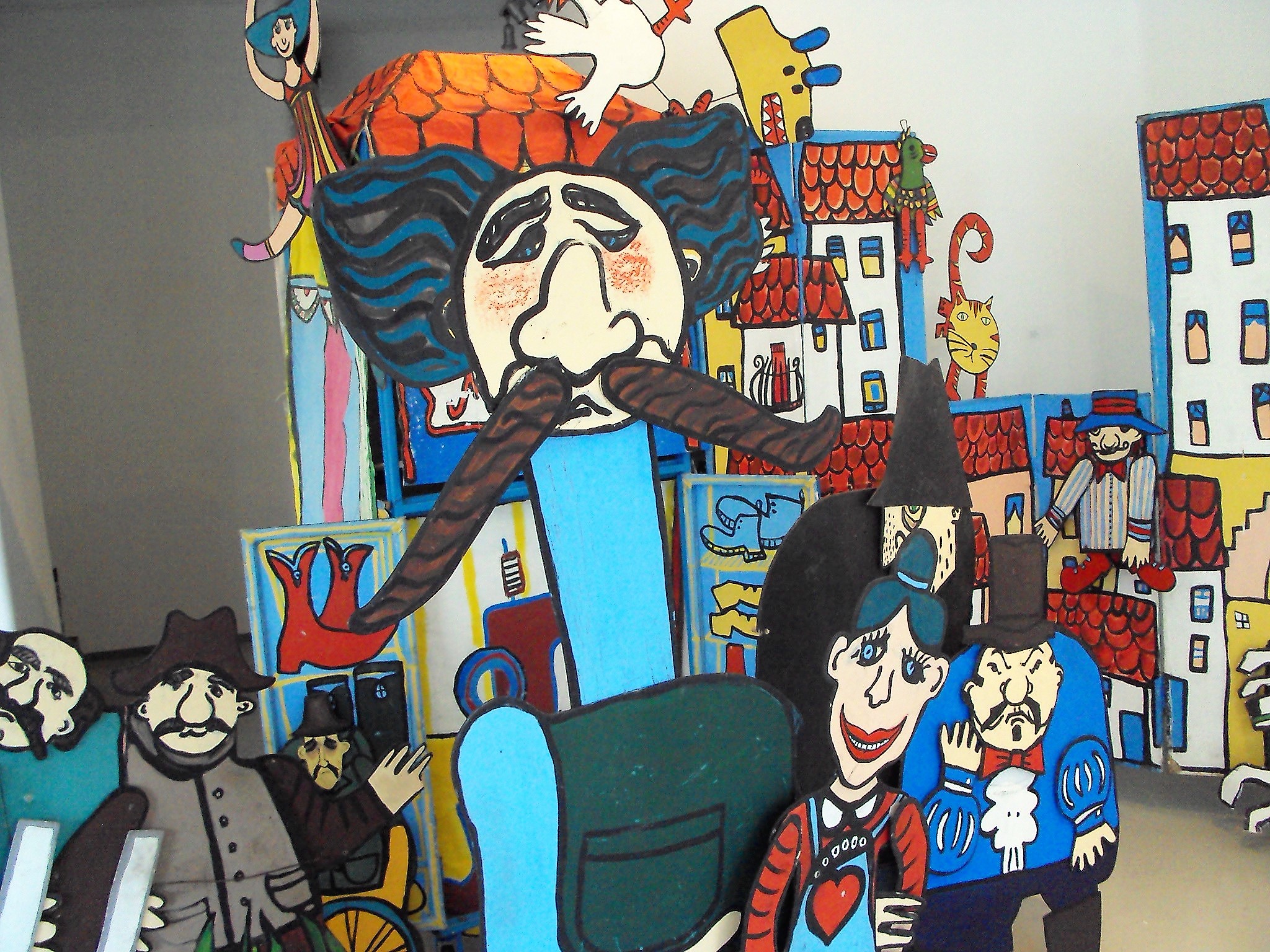 Mini teater was founded in 1999 by Robert Waltl and Ivica Buljan, with the purpose of enhancing creativity in post drama theatre and theatre for the young.
Mini teater is aesthetically directed towards texts written by authors such as:
Bernard-Marie Koltès, Heiner Mueller, Robert Walser, Elfriede Jelinek, Jean Genet, Hervé Guibert, Arthur Rimbaud, A. S. Pushkin, H. Ch. Andersen. Priority is given to research directing aesthetics with directors like I. Buljan, A. Anurov, P. Calvario, S. Nordey, R. Waltl, J. Ivanc...
Yearly, Mini teater performs about five hundred performances in Ljubljana, across Slovenia and abroad, as well as in numerous international festivals (in ten years we had 180 performances on tour on all continents). Taking part in prestigious festivals in Moscow, Naples, Havana, Warsaw, Vienna, Brussels, Sarajevo, Belgrade, Cairo, Teheran..., we assert our interest in international co-operation, while with Croatian institutions like Novo Kazalište Zagreb, ARL Dubrovnik, ZeKaeM- Zagrebško gledališče mladih, Zadar Snova, Teatar ITD, HNK Rijeka, we create a privileged partnership.
Mini teater has won a number of awards and recognitions for its theatrical achievements in Slovenia and abroad.
The Mini Summer Festival for Children is a festival offering the youngest audience the best puppet and chamber performances touring from all over the world.
Through its paradox goal – to be an elite theatre that is accessible to the public, eccentric yet attractive for a wide audience – Mini teater breaks the traditional boundaries of theatre, affirming them merely in the way of thinking. In the new premises of our theatre on Križevniška 1 in Ljubljana, Mini teater will follow the »concept of an enlarged theatre«, offering a series of novel readings performed by the best Slovenian actors, concerts, and artistic actions.
Mini teater was founded in 1999 by Robert Waltl - director, actor, puppeteer and art manager - and Ivica Buljan - director and dramaturge, as a small theatre for the youngest audience. Through studying the Slovene cultural and theatre environment, Mini teater reshaped its structural idea and started to develop different streamlines and art practice in its theatrical activity. The company has a small theatre hall within the Ljubljana Castle, where performances for children, youth and adults are played, or school and kindergarten groups are invited to visit and new theatre hall at Križevniška ulica within Ljubljana Old Town where Mini teater's post drama performances and other activities are held. The theatre also tours across Slovenia and abroad. The programme is supported by the Ministry of Culture of the Republic Slovenia and the Department of Culture of the Municipality of Ljubljana.
Mini teater’s basic activity features production of quality puppet and theatre performances in collaboration with artists from different artistic environments. While the theatre is dedicated mainly to puppets, this does not prevent it from also producing acted performances for adults and youth. In creating the programme, the staging of Slovene texts (preferably from Slovene national heritage) is a must, yet the promotion of contemporary world drama texts for adults is equally important, alongside with establishing new approaches in directing, or working with Slovene and international stage directors and actors (Robert  Waltl, Ivica Buljan, Philippe Calvario, etc.)

Iva-Matija Bitanga was born on 11th January 1974 in Zagreb. In 1992, she completed the course of ceramics at the School of Applied Arts and Design and the course of violin at the Vatroslav Lisinski Secondary School of Music, after which she enrolled in the pedagogical department of the Academy of Fine Arts in Zagreb. She became a professor of fine arts in 1999. From 2000 to 2004, she studied at Hochschule für Gestaltung in Karlsruhe, at the State High School of Design, where she completed her postgraduate studies in Scenography and Exhibition Design with Louis Phillipe Demers. Since 2011, she has been a permanent associate of the Faculty of Education in Zagreb and Čakovec, and, since 2016, of the specialist study of Drama Pedagogy. Since 2013, she has been a full-time assistant professor in the study programme of Media Design at the Sjever University in Koprivnica and in part of the specialist study programme in Drama Pedagogy at the Faculty of Education, Department of Performing Arts, at the University of Zagreb. Since 2015, she has been a doctoral student at the postgraduate study of Literature, Performing Arts, Film and Culture at the Faculty of Arts in Zagreb.
Since 1995, she has been professionally engaged in fine arts, exhibiting independently and in groups in Croatia and abroad, and since 1996, she has also been designing scenographies, puppets, costumes and music for the theatre, and since 2000, she has been cooperating with HRT. In her artistic work, she is also known as a member of several art groups: fashion performance group Daklelososi, art group GastArtbeit and theatre groups Schmrtz Teater and Tigar Teater. She has received several awards and prizes in the fields of fine arts, scenography and costume design.
She writes reviews of animated and short feature films and scientific articles for scientific journals.

Ana Viktorova was born on 23 September in St. Petersburg in Russia. She graduated from the Russian State Institute of Performing Arts in St. Petersburg. Her creative work encompasses working as a puppeteer, director, puppet technician, sest designer and costumographer. As part of her work as a director and puppet designer she has worked with theatres in both Russia and other countries. Her most notable performances (Crime and Punishment, The Tale of Tsar Saltan, Brainstorm ... ) received awards at various puppet festivals around the world. In 2005 she also received the Golden Mask national theatre award. In 2002, she founded the KUKFO puppet theatre in which young theatre.

Share:
Museums on a Summer Night 2019 at the Bežigrad Gallery 1
Award for Tina Konec at the Slovenian cultural holiday.
Photographs by Boris Gaberščik at Bežigrajski galeriji 1
Images of Alphabet by Studio Sigum / Paintings, visual poetry, books, antologies, photographs and collages
At Bežigrad Gallery 1 one of now rare solo exhibitions by Andrej Trobentar