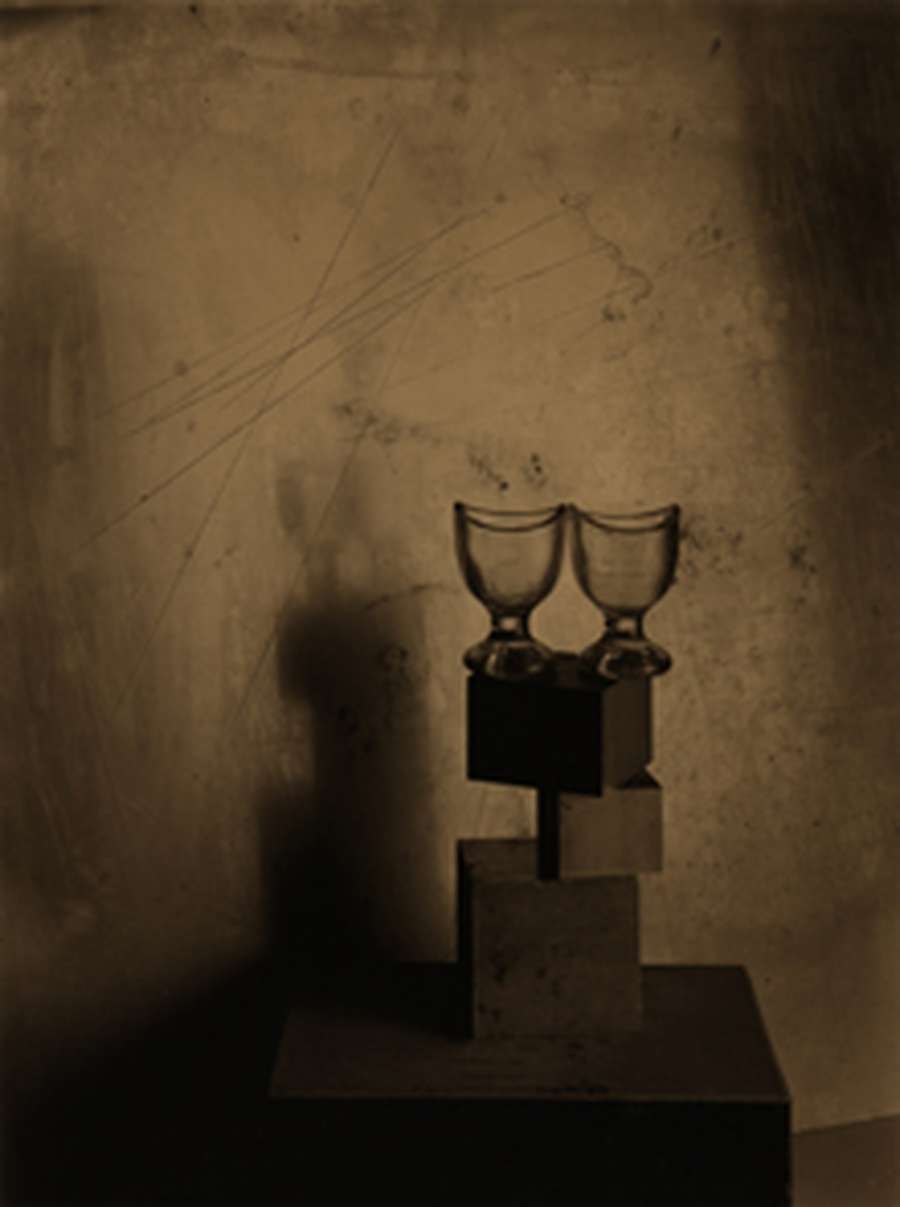 The Fruits of a Lengthy Experience

Presentation of most recent works by Boris Gaberščik, a photographer committed to the tradition of photography. Using completely analogue black-and-white photography to portray the world of everyday objects and inanimate nature, he nevertheless applies innovative creative approaches. He created these photographs specifically for this exhibition called The Fruit of a Long Experience in Bežigrad Gallery 1.

Endless existence of things and objects
Boris Gaberščik keeps challenging the viewer with objects that come from his carefully planned collection activities. His studio is full of things that he has found on his travels to places near and far. He turns objects from everyday life into the main actors of his works, often looking as if they are about to lose balance. They display a strong sense of utility because he uses them to create compositions.
This time around the compositions exhibited in Bežigrad Gallery 1 consist of objects in semi-darkness, in an unidentifiable space and lit by a precise ray of light coming from the right. In some photographs, however, he intentionally or unintentionally introduces human figures in the compositions.
Although they usually have a clear purpose, the author gives them a more spiritual and ethereal feel. Even the objects with an unclear purpose somehow manage to show their hidden meaning.
If you hadn’t known that Boris Gaberščik had created these photographs exclusively for this exhibition, you may not have been able to determine their age. His photographs are timeless owing to the constantly innovative black and white analogue technique. Still life in his photographs actually depicts life.
—  Miloš Bašin ©

Short nights are for visiting photographers I admire. I’m not completely sure if I’m dreaming, deep awake with my eyes shut, or sleeping and travelling with curiosity. I recently visited Josef (Sudek) in Prague. The master had just returned from a classical music concert – word has it he never misses a concert. He wasn’t feeling chatty and wouldn’t talk about photography. So we talked about beer and Tvaruzky cheese. “Kolín has the best cheese,” says Sudek. As I was looking at the window of his studio, a cat jumped on my bed and I found myself in the dark of my own room. Too bad. Yesterday, however, I was in Paris near the church of Saint-Sulpice, 2 Rue Férou. I struggled to find the entrance and then climbed the stairs. Juliet (Browner Ray) was sitting at a desk, slumped over a newspaper, a bottle of Chivas and an empty glass. She smiled and pointed to the door on my right. I entered silently (like a dreamer should) and discovered Man perched on the edge of a sofa with a colourful vivid cover. A large black and white chessboard stood behind him and next to it a lamp shade (around 1940 ,I would say). We greeted and he examined me with his sparkling eyes and said: “Oh, là là. You would like to be un surréaliste...” I started apologising: “Some people see traces or onsets of surrealism in my works...” “Bon,” he interrupted, “be careful, don’t allow that hotshot influence you” and he made that typical gesture with three fingers, as if he was twirling an imaginary moustache. “You see, flying tigers, poor animals with stretched legs and clocks melting and hanging from trees, that’s not surrealism, that’s delusional fantasm. The surreal is right here, around us. In our relationships, shadows and everyday objects, but spectators aren’t ready for them. But they can see them clearly in photographs.” I told him: “Like a random encounter between a sewing machine and an umbrella on a dissecting table.” He nodded: “Exactement, quite nice, right?” The door opened and a man entered. “Salut Serge (Béguier),” said Man. “Here are the most recent experiments.” Man grabbed a pile of photographs hastily and spread them under the light, like a moth spreads its wings. He switched and turned them, observed them carefully and then gathered them back quickly, saying: “Perfect, Serge, amazing velvety blacks, beautiful tonality and whites, like ivory, or butter.” “Agfa Record Rapid,” said Serge. “You have until Friday to finish, I have to sign and stamp them.” “Of course, master.” He left as silently as he entered. And you, mon cher, leave, Marcel (Duchamp) is coming for a game of chess. And don’t forget, photography is not art, it’s a game.” Juliet dozed off and so I let myself out. On the street I was thinking what Man would have said if he had know how many photographs Béguier had reproduced illegally, and also Gassman, and another no-name photo lab specialist. B. Walter and Helen, Serge’s wife, worked with expert G. Levy to deceive W. Bokelberg, an unfortunate millionaire, and sold him over 60 Ray’s vintage photographs. They were created on Agfa’s photographic paper. The chemical composition changed significantly (after 1960 cadmium was no longer used and was replaced by optical brighteners, and the watermark on the back changed too). Well, a publicist once wrote that Man would probably have a lot of fun because he very much enjoyed social intrigues and human madness.
Man Ray (Emmanuel Radnitzky) found his final resting place in Montparnasse Cemetery in 1976. Josef Sudek, Imogen Cunningham and Paul Strand all died the same year. Photography is not what it used to be anymore.
P.S.
Next time I’ll visit Edward (Weston) on the Wild Cat Hill (Camel). I’d like to give him a cat for his birthday. He really likes cats, he already has 13 of them, but I’m not sure how to smuggle a cat into my dreams. I have until March to think of something.
—  Boris Gaberščik ©
In Ljubljana and Kranj, December 2018

Boris Gaberščik was born on September 28, 1957 in Ljubljana. After graduating from grammar school, he studied biology and graduated in 1985. During his studies, he had already been engaged in photography. He had numerous solo and group exhibitions in Slovenia and abroad. Among the most important are exhibitions in Galerija Fotografija (Ljubljana), Gallery Equrna, Gallery Fotohof (Salzburg), Orpheum (Graz), Moderna galerija (Ljubljana), City Galleries (Ljubljana and Nova Gorica), ZPAF Gallery (Warsaw) and Gallery Vu (Paris). With Galerija Fotografija he participated in art fairs and festivals (Vienna Fair, 2009, Paris Photo (Louvre, 2010, Grand Palais, 2011), Festival Photo Mediteranee, Sanary sur Mer, 2013, and Photo Basel 2017 and 2018. His works are part of public and private collections. He received several awards including the Župančič Award (2008) and the Prešeren Fund Award (2018). His work was presented in magazines, newspapers and other media. He is author of photography for monographic publications, catalogues, annual reports etc.. As creative photographer he collaborated with numerous designers. He lives in Ljubljana as an freelance photographer.