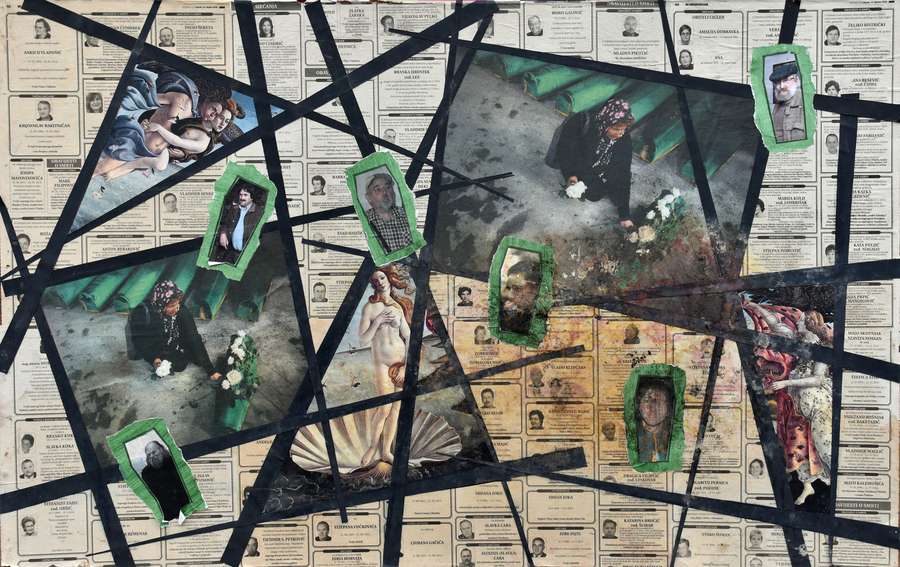 The memorial exhibition of poetry and a retrospective of traditional, visual, and concrete poetry, art interventions and performances of Živko Kladnik from 1970 to 2016. It is the 28rd edition of the cycle of presentations of visual and concrete poetry at the Bežigrad Gallery.

The author was conscious of the possibility that it is feasible to work in various ways and in a symbiosis of two art forms — literary and visual art. In the early 1970s, he was among the first artists producing visual and concrete poetry in Slovenia. The exhibition will also present, visual poetry, books, anthologies, photos, colllages, and films that were published in the 1960s and 1970s as complex literary editions where literary and visual messages were inseparably linked.

A visual warning
In his independent projects and activities in formal and informal groups of artists, Živko Kladnik continuously keeps pace with certain neo-avant-garde processes. For example, he frequently makes use of ready-made processes (recycling or the use of discarded materials in art objects) in the framework of "visual and concrete poetry", a concept linked to a large part of Kladnik's gallery projects. Another important creative process is collage – the compilation of cut-outs from newspapers and magazines, photographs, movie posters and photocopies. Like the ready-made approach, collage embodies an indivisible intertwining of images and words. The author thus links personal/testimonial components with provocative directness and a proactive, socially critical stance. The latter can also be noted in the cycle of works presented here, which took shape following an extended period of creative introspection and preparation. This was a precondition for the subject matter which serves as the basis for the works, as Živko Kladnik is calling our attention to one of the largest acts of genocide in recent European history.
Photos depicting mothers mourning beside coffins, taken at the interment of 775 of the over 8,000 Muslim victims of the Srebrenica massacre at the Srebrenica Genocide Memorial in Potočari, were picked up by media throughout the world on 11 July 2010; sadly their tragic and disturbing message was quickly blocked out by other stories from elsewhere in the world that caught the media's attention. Kladnik felt that he could use the tools provided by visual art to place emphasis on the warning that the photographs present to all of mankind. He connected the photos with newspaper obituaries, stylised depictions of coffins containing various portraits, black ribbons and the words of the Spanish playwright Federico Garcia Lorca (1898–1936), who himself was murdered by soldiers under Franco's Fascist regime: "Green, how I want you green". The collages were then outfitted with discarded frames of different shapes and sizes.
The 14 works in the cycle correspond to the 14 stations of the cross, an iconographic motif used by artists in the Western European Roman Catholic tradition to depict the path along which Jesus bore the cross from Jerusalem to Calvary. Some of the collages also contain a photograph of an expressive wooden sculpture of Jesus on the cross. The network of associations that Živko Kladnik has woven encompasses us as well, and the author points this out by incorporating photographs of people he knows and famous persons in the collages.

Živko Kladnik was born on the 11th of June 1948 in Novo Mesto, and lived in the region of Gorenjska – Kranj and Cegelnica pri Naklem. He was a poet, a film director,head of the Film Festival of Kranj, presi-dent of the Kranj Football Club (1973-1979), secre-tary of the Chess Society of Naklo, co-founder of the Kranj film group 'Ime' and the concretist group 'Stu-dio Signum', co-creator of the international publica-tions WESTEAST, a member of the 'Jasna' visual arts meet and coordinator and/or creator of numero-us other  cultural events in the city of Kranj. He died in Kranj on the 23rd of January 2017.