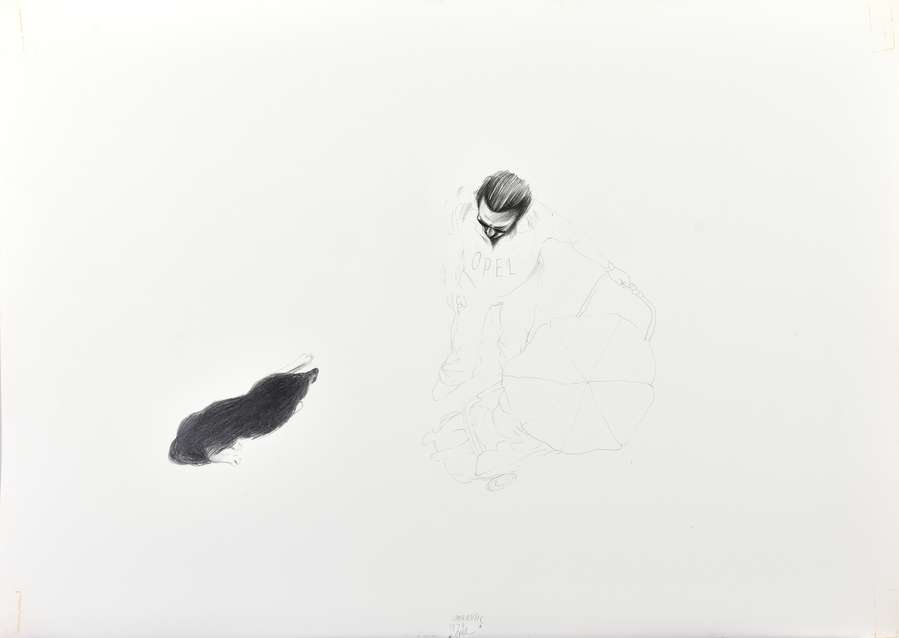 The exhibition presents some of Marúšić’s less known works from the 1977s, coming from the collections of the Piran Coastal Galleries and private collections. During this period, the artist worked on drawing and painting images, which were based on zooming in and out as perceived by a camera lens. Particular to these works is a bird’s eye view, in which human figures and street objects create the impression of a tranquil levitation.

People in motion
All of the works by Živko Marúšič express his pleasure of painting. There is joy in each line, excitement over forms and countless colour combinations. His knowledge of the principles of visual art blends with his awareness that each work of art gives way to incredible colour combinations.
Events from his own life and his perception of those events are constant topics he has been exploring and recreating. What is particularly important is his ability to observe carefully the position of people who are at the centre of his attention. Human figures usually seem dynamic and in motion. Even when confronting another person. Nevertheless, the majority of his creations feature one single person – visibly characterised by his or her current posture and emotions caught on the face at that moment. Živko Marúšič often used photography in the creative process to either conceptualise his works or create collages in numerous sketchbooks that resemble actual books.
Miloš Bašin ©

Živko I. Marúšič (formerly also Ziuko Marusic, Živko Niero Marši ú č; full name Živko Ira Mar úšič) was born on 20 September 1945 in Colorno, a small town near Parma in the Italian province Emilia Romagna.
Between 1967 and 1971 he studied at the Accademia di belle Arti in Venice and continued his studies at the Academy of Fine Arts in Ljubljana under Professors Zoran Didek, Gabrijel Stupica, and Janez Bernik, completing his postgraduate program in 1975 with the thesis "A Photograph as a Basis for a Painting." The study trips that were influential for Maruoio were the ones to Paris in 1977, Sicily in 1979, Rome in 1983, Madrid and London in 1999, and the years he spent in Venice as a student. He lives in Koper and Croatian Istria.