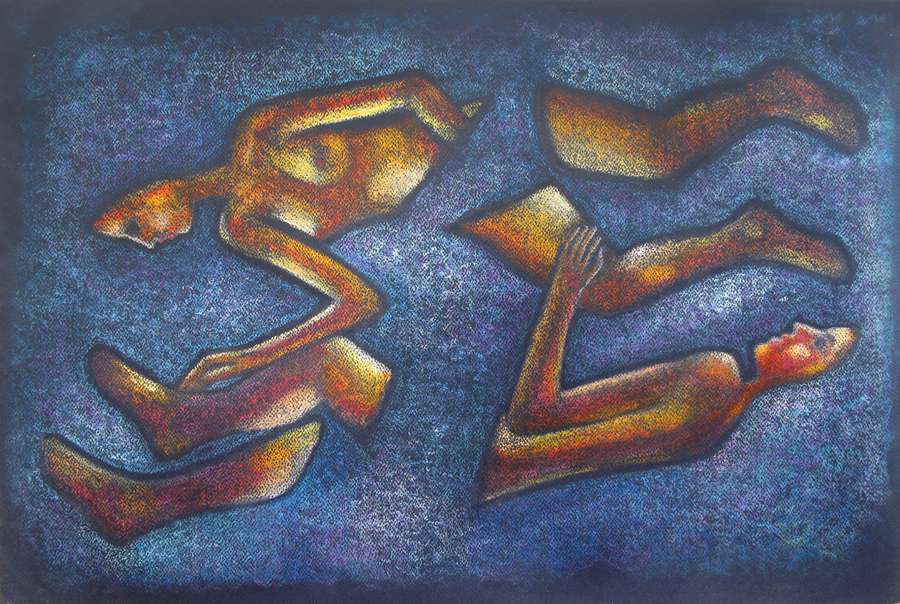 The display is presented serie of paintings from 2014 to 2022, in many ways, are reminiscent of his artistic work when he just started out.

Disappearing, vanishing and overlaying
Floating in the blue hues that describe and characterise our existence
Rajko Apollonio is back creating paintings which, in many ways, are reminiscent of his artistic work when he just started out in the mid-1980s, especially the period 1985–1987, and some of the works and cycles he produced after 2000. Landscapes veiled in semi-darkness have always been a typical feature. His earlier paintings, however, showed a hint of blue in the background, only to reveal a fragment of a distant darker shade of the sky.
This exhibition in Bežigrad Gallery 1 depicts social gatherings, movement, and female and male bodies melding with a myriad of different blue surfaces. Various shades of blue applied in a variety of ways dominate the paintings. Even the bodies’ most intimate parts are covered with whole blue surfaces. In some cases, a very clear line demarks a part of the body and the rest of the surface, whereas in others the human bodies are sometimes invisible due to a veil resembling blue surfaces from the background passing through the bodies.
This exhibition also features two cycles. Rajko Apollonio has always sought to paint the same scene in varying shades of semi-darkness in order to capture the specific moments of light at the two times of the day when colours and shapes change in various shades. As for his more recent creations, they are typically devoid of human bodies, which he replaces with the background of all of his paintings: the sky and the colour of the sea flowing through individual parts of the human body.
The way he constantly changes colours, switching and turning individual human figures is an apt metaphor for eternal alteration of the world and the elusiveness of everything happening there. At the same time, those paintings would not and also cannot tell stories.
Everything is laid bare at all times. What is invisible is desired.
There’s a desire and truth in the truth.
It is there for us to see and fully comprehend.
Miloš Bašin

Rajko Apollonio was born on 26 August 1957 in Koper.
He studied  from Accademia di Belle arti in Florence and Venice in years 1976−1981.
He lives in Koper.