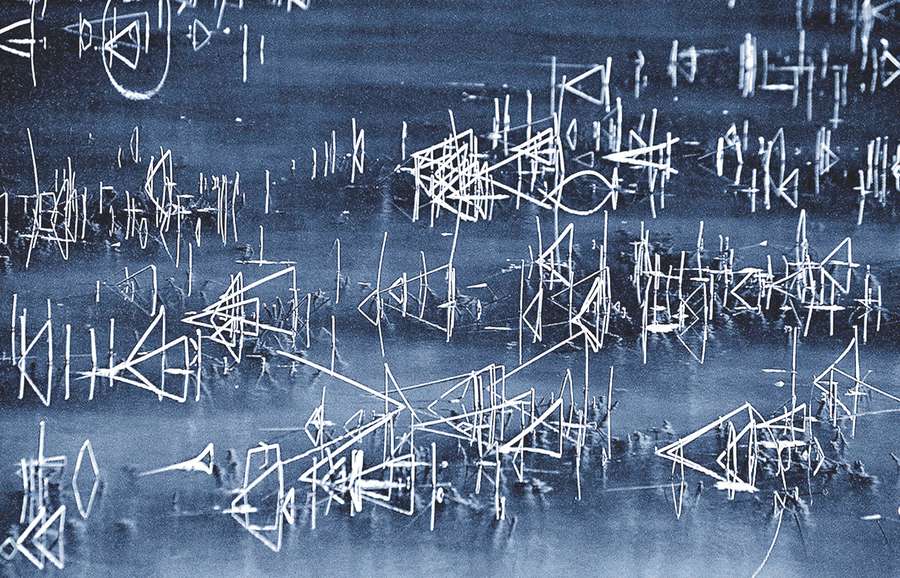 Exhibition of documentary material and artworks by the members of the music group SAETA, composers, and artists, with which the group creatively worked with for the last, very respectable, 40 years. The international exhibition presents notations, drawings, scenography, photographs, collages, tempera, paintings, films and video.

SAETA, the experimental music group saw its beginning in 1977. It was initiated by Bor Turel, a composer and a pianist, and by Miloš Bašin. The group began performing by taking part in the programme organised by The Music Youth of Slovenia, giving concerts and live commentary on the Slovene and the world contemporary experimental music.

Since 1978 it has been active in the Bežigrad Gallery, either by giving ad hoc performances or by participating in the current activities of the gallery. From 1979 till 1981 the group elaborated its concept of music.

It combined a predetermined improvisation with the elements of experimental music, by employing a variety of scores and the instructions for performance. The minimalist elements intertwined with the live or re­ corded electro-acoustic effects , produced by various devices. At that tirne the group was unique performing this kind of music and it gained the international assertion by participating in The Youth Biennial held in Paris, in 1980. Furthermore, it performed at the Styrian Autumn held iGraz, in 1984.

The group performs the music which has evidently focused on the achievements and finding reached by avant-garde music, experimen­ tal music and music of minimalism. These foster the democratisation of sound relationships and an unrestricted application of acoustic devices. Consequently, the group produces the music of improvisation, in which each performer is given an equal opportunity to develop outmostly his creativity, based on the personal musical experience and spiritual abili­ ties. However, he is also obliged to employ throughout the performance his audible sensitivity and is compelled to be highly perceptive and toler­ ant of the music performed by the other members of the group. As a result, each member of the group joins in the game of musical adven­ ture. On the one hond, each player has to follow certain rules and adapt himself to predetermined musical performance.

On the other hond, he is free to produce unprecedented sound event spontaneously. Each player is a creative player and a careful listener at the same tirne.

The game con possibly end instantaneously, but it con also continue for ever. Each player is both a performer and a composer. As the result of ali this, we con hear the collective music, in which various sound events are inter­ twined. And last but not least, we con hear the music by which individual performers intertwine within close relationships.

SAETA, initially as the first and the only group in Slovenia to bring together, in its approach, organized improvisation, elements of experimental music based on diverse scores, notations, and performance instructions, elements of minimalist (repetitive) music, and live or recorded electroacoustic music of a variety of sound sources. To this day, the group has remained faithful to its original approach. Over time, Saeta has become established both at home and abroad, giving concerts in Ljubljana (in the Cankar cultural center and as part of the European Month of Culture), in other cities of former Yugoslavia, such as Belgrade (performing at the European Festival of Minimalist Music), Opatija (at the Music Creativity of Yugoslavia festival), and elsewhere in Europe, e.g. in Paris (at the Biennial of Young Artists) and Graz (at the Steirischer Herbst). In 2002, the group staged the “O-zvočenje 1” event (About-Soundings 1) together with composers from Slovenia, France, Serbia and Montenegro. In 2017, the ensemble performed at the SAJETA festival in Tolmin, Slovenia.

Since 1999, SAETA has been composed of Miloš Bašin, Aleš Gasparič, Lado Jakša, and Boštjan Perovšek. The ensemble has also been performing with Tinkara Kovač in Irena Tomažin, as well as with the late Jože Slak-Đoka.

40 years of creativity and activity of the SAETA collective

We are inviting you to an exhibition of documentary material and artworks by the members of the music group SAETA, composers, and artists, with which the group creatively worked with for the last, very respectable, 40 years. The international exhibition presents notations, drawings, scenography, photographs, collages, tempera, paintings, films and video.