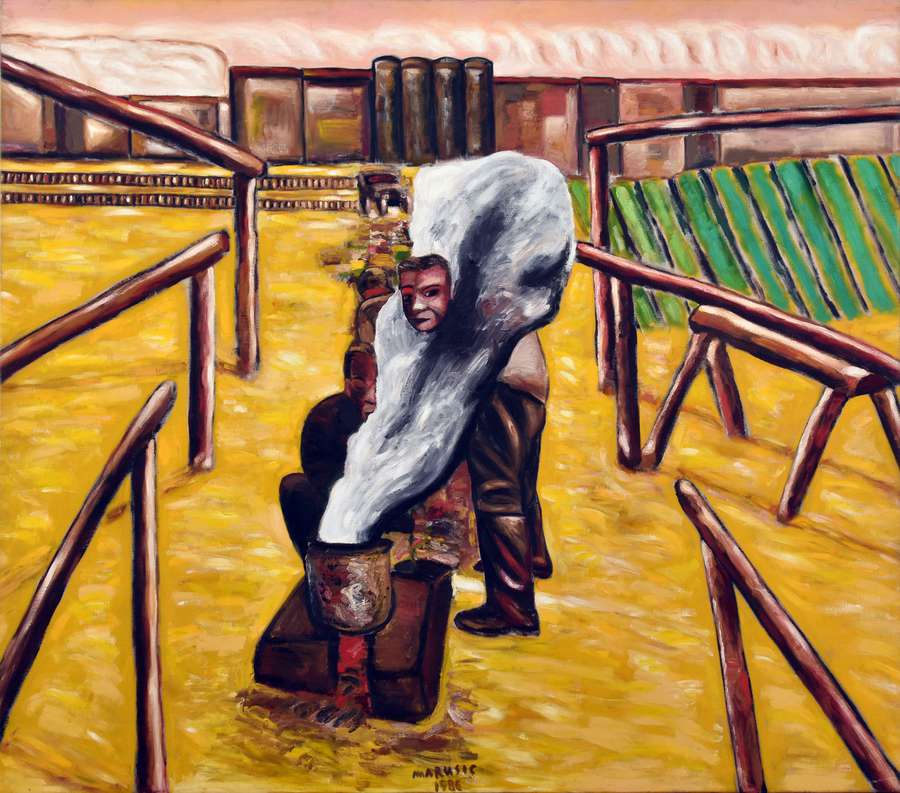 Selected works by the Prešeren awards recipients originating from Slovenian Istria, coming from the collections of the Piran Coastal Galleries and the Prešeren Award Winners of Fine Arts Gallery Kranj. Drawings, paintings, prints, and sculptures by Zvest Apollonio, Aleksij Kobal, Janez Lenassi, Žviko Marušič and Andraž Šalamun will all be exhibited.

The collections in Piran Coastal Galleries are a result of decades of accumulating artwork and complementing individual collections: initially, the process was quite random in the 1970s when the Piran Coastal Galleries were established. In the following decade, however, concepts for individual collections started to take shape. Carefully planned and regular purchases aligned with the institution’s program, donations and organisation of international events (e.g. the International Painting Ex-Tempore, Forma Viva Portorož International Symposium of Sculptors, former Koštabona photo colony, etc.) have contributed to the current scope of collections that are an important piece of the cultural heritage of Istria and the wider national and international space from the second half of the 20th century onwards. The following artists have also contributed their work to the mosaic that is this exhibition: Zvest Apollonio, Aleksij Kobal, Janez Lenassi, Živko Marušič and Andraž Šalamun. Each and every one of these artists have in different ways built this important area of art in the local and broader international senses, for which they have received the most significant national awards in culture, i.e. the Prešeren Awards.

The painter Zvest Apollonio received the Prešeren Award in 1972 for painting and printmaking. He has a place in modern Slovene art as a landscape artist who initially devoted his time to painting and printmaking in equal measure. Colours were the key expressive element that he used in stylised and abstract shapes to create numerous mostly coastal landscapes with their topographic archetypes and ever-changing lighting conditions. He would often complement his coastal landscapes with a female figure: this is how his series called Debris came about as his way to process the environmental crisis. At that time he was intrigued by screen printing, a technique that was increasingly popular abroad and which provides a myriad of new options compared to other techniques, especially in terms of using chromatic elements, such as strong vibrant colours, the way they melt into one another and create new shades. As a colourist painter Apollonio devoted his career to thoroughly exploring this medium, which is why he is considered as the pioneer of screen printing in Slovenia. In addition, he worked as professor of the technique at the University of Fine Arts and Design in Ljubljana and helped popularise it among several generations of artists.

Aleksij Kobal received the Prešeren Award in 2016 for his Nocturno exhibition at the Piran Coastal Galleries and for the Area of Capture exhibition at Bežigrad Gallery in Ljubljana. For more than three decades he has brought important topics to the attention of experts and the general public through various cycles. Regardless of individual motifs, Kobal uses classical painting techniques and some unconventional materials. As for topics, his works in their own way demonstrate, analyse and discuss the reality of a moment and point to the author’s vision of the future. The simplicity of images is reduced to the key elements of meaning (from the artist’s perspective). The metaphorical language of veristic architecture, with typical structures of modern cities and derelict industrial buildings placed in the endless sky, are the elements that he assembles in various combinations to create fresh visual attractions as utterly intimate analyses of individuals and the global social situation, particularly the state of mind in society.

Janez Lenassi received the Prešeren Award in 1966. He is one of the very few sculptors who devoted their time to Istrian stone, making the utmost effort to delicately preserve or revive its elementary beauty and energy. After completing his studies, Lenassi played around with various sculptural techniques, including bronze casting, creating human figures, etc. In the following decades, however, his work evolved, but still followed a line of topics and messages that revolved around the source of life and natural resources. The words of the master are quite humble: “I think that nature is the best sculptor,” and “...I see myself as an ecologist rather than a sculptor.” This attests to his respectful attitude towards everything natural, and to the way he feels about human impacts on nature. Through his meditative process Lenassi created an autochthonous matter, taking great[PS1] care to “renew” or “revive” the organic character of primal energies. He perceived a block of stone, a raw, tough and solid material, as a vital organism that lives and functions according to its own principles and in harmony with its place of origin. Such a symbiosis can provide the conditions for life, development and growth.

Živko Marušič received the Prešeren Award in 1999 for his retrospective exhibition at the Museum of Modern Art in Ljubljana (1998). He works in painting, drawing and printmaking. His art developed over time, but he preserved the figurative features that turned into an authentic personal mythology in the late 1970s. He filled his canvases with bright colours and a joyful play of tiny and seemingly random shapes and objects that cannot be found in the real world. But they reflect the author's momentary experiences, unconscious side, imagination and dreams. Nearly a decade ago Andrej Medved, the curator of the Piran Coastal Galleries, considered Marušič as one of the most important representatives of the new art movement called New Image: “Marušič is the leading artist of Yugoslavian New Image.” The paintings and drawings on display here were created at the end of the 1970s and in the 1980. Medved made a point in saying that they were: “...governed by a new sensibility, a personal and extremely individual atmosphere that is also archetypal. The images are neither commented on nor in need of explanations. We understand them a priori because the relationships between objects and emotional ties are always present in our experiential world.”

Andraž Šalamun received the Prešeren Award in 1993 for his exhibition at the Piran Coastal Galleries. His experience with art and particularly with arte povera and body art can be mainly attributed to his membership of the OHO Group. In the 1970s his distinctive painting started to take shape. To this day it remains incomparable to other art movements of the time. The vast painted surfaces of unprimed jute became spaces for a meditative process where he applies colours with spontaneous and energetic strokes, thus exploring their material and symbolic value. Andrej Medved also said: “His paintings are not characterised by outwardly-oriented, striking Mediterranean colourfulness, but rather a subtler, internalised Mediterranean landscape that came about with the sublimation of internal emotions and sensations that are primarily psychological. Šalamun’s creations are thus psychological landscapes.” His opus is very diverse in terms of topic: landscapes in various periods of his life, the Bison series in the 1980s that made him one of the representative New Image artists, and the renowned cycles Suns, Moss and Silver, Venice, Nudes, etc. His one of the most innovative and prolific artists.