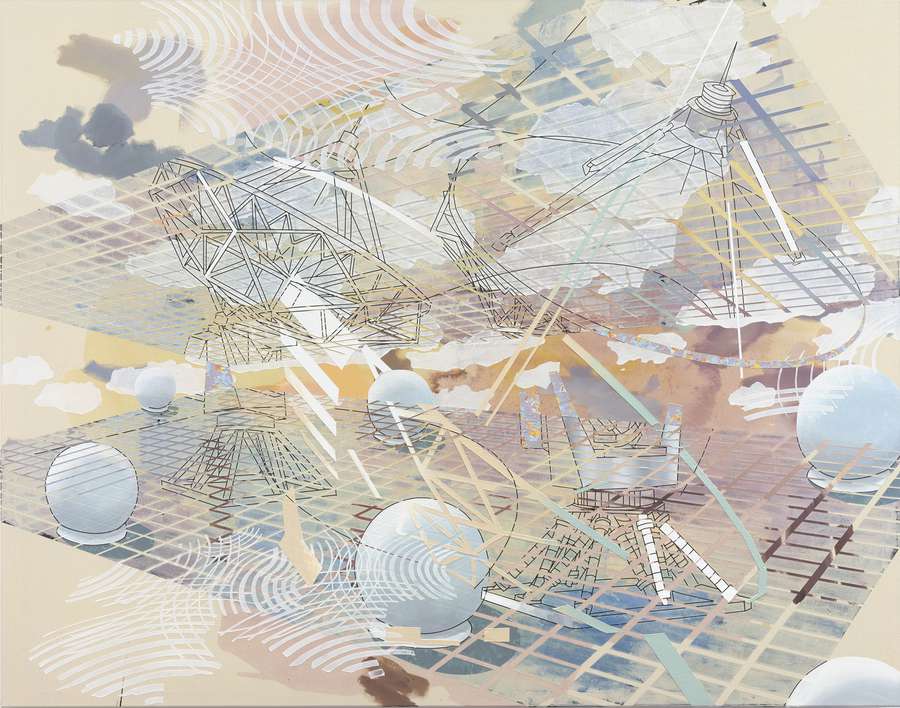 Suzana Brborović initially only tries to revive the shadows and bring them to light again. This might be because her father is in the construction business in Slovenia. As a child she often wandered around constructions sites, which give a clear idea about architecture, with bare walls that seem like skeletons and are later covered in flattering, reconcilable façade.

But there is something else hiding behind buildings – something concrete, physical and full of meaning. Construction sites build understanding. That a façade is a face, a moment caught in a polyphonic performance.
Suzana Brborović is a digital native. In addition to the computer, she works with canvas and paint. On the canvas she first designs an abstract composition, a linear structure, which initially seems irrelevant. Then she starts eliminating certain sections, literally smudging colour on the surface, leaving watery, cloudy stains. And then she projects various photos on the canvas layer by layer.
Sometimes she uses photos taken right there, and sometimes she uploads images from the internet that she processes on the computer and creates a collage of to transfer to the canvas. This results in various layers, structures and textures, as we like to call them.
The architecture she builds on the painting is not just a shape, a wrapping, a material or a structure, but also a link to social processes. It is full of social references.
Socialism, for instance, obviously left some traces – in Plattenbau buildings, which may have been graced with Western elegance – but the former ideology is very much alive. Or the empty factories with which Eastern Germany abounds. These are not just some ruins, but a testament to industrialisation, as well as various political and economic shocks, the remains of production facilities whose work was long ago moved to Bangladesh or China.
Suzana Brborović and her artworks allude to the complexity of reality, a confused interconnection between the level and layer of meaning. Through the apparent mathematical accuracy intertwined with construction plans she adds weight to the experience with a chaotic tangle and explosive shapes protruding into space. This may seem futuristic, but Suzana Brborović reminds us to tackle the complexity of reality – which also includes traces and shadows of yesterday – instead of rushing to the future and relying on progress. For instance, such traces appear when we accidentally print something on used paper or when photos are overexposed. Faded history remains visible like an echo.
Adrienne Braun

Suzana Brborović
She was born on 12 March 1988 in Kranj. She lives and works in Lepizig and Kranj.
Education
2007 - 2013  Academy of Fine Arts and Design Ljubljana
2014 - 2016  Postgraduate study of painting (Meisterschüler) at Academy of Visual Arts Leipzig (HGB), mentor Prof. Ottersbach.