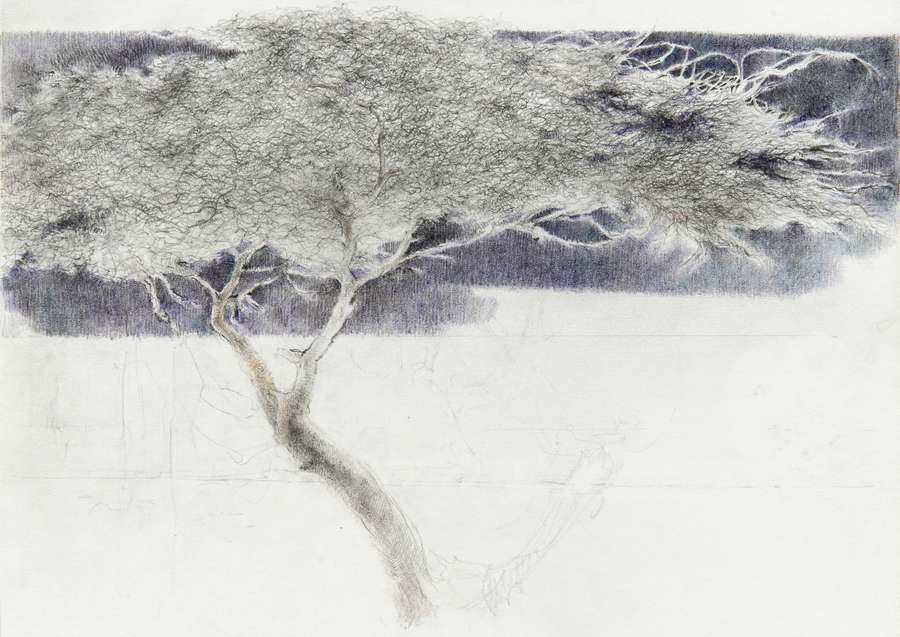 His drawings are specific, drawn as if on a translucent membrane on an illuminated field. The works exhibited are from the period 1982–2017, during which the author was focusing on drawing images of plants and various fragments taken from nature.

Josip Korošec is an accurate observer and creator of shapes and colours of objects, of scenes from the world of nature, and of the light that passes through them. In his artwork, a new artistic life is always the starting point of the liveliness of the observed objects, forms, and plants. He makes no alterations to their colours.
Josip Korošec creates drawings where the viewer must, from his or her own viewpoint, add or recreate what to them seems to be absent.
His artistic approach relocates us to a barely noticeable appearance of reality. His artwork represents at the same time fragments of portrayal and the true appearance. At all times, it is the objective and at the same time the seeming that leads us into our view and the re-creation of our view on (fine) art.
Drawing closer to nature itself, to the objects and the scenes from nature, the drawings exhibited bring us closer to the new world he creates here.
The object of observation is thus transformed into his vision of a new, multicolour outline. In paint, it is just as real as in reality. With this, he exposes his experience of all things seen as a newly-born world.
— Miloš Bašin, Bežigrajska galerija, 2019 (From tekst for the catalogue)

Bits From The Notebook Of Revelations
Artistic expression can be understood as a set of creative interventions in the visible space, or as processes where the imaginary is turning into recognisable content of objective reality. The blend of emotional, mental and sensory properties positions it in the midst of an era and sometimes even pushes through the substance of time. In this respect, the elements of expression are undoubtedly a serious challenge because their characteristics, the level of skill and manner of use are instrumental in actualizing an idea. The incredible metamorphosis of inspiration brings to life the subject. They are definitely the key factors whose direct or indirect presence resides in the subject’s physical and intangible core. The character and perhaps self-sufficiency of the line, colour, surface and volume are fateful within the genesis of individual work of art. This is because their extent and meaning are determined mainly by expertise and experience at a given moment along with intuitive recognition and support to the expressive capacities of those elements. It is interesting how lasting coexistence of elements of expressions reveal some amazing truths, like gravel on the path to the universe of adventure.
Over time, curiosity and the need to preserve the picture elevated the affinity for the line that has faded away in nostalgia for presence and expressiveness, which lead to the hidden places of space and resonate with time.
Elements, such as lines and colours, go hand in hand with the artist to humanize the selected content into the values of the time. To this end, they are a pledge to preserve them and inspire new revelations.
— Josip Korošec, Bežigrajska galerija, May 2019 (From tekst for the catalogue)

Josip Korošec was born on 11 April 1941 in Sarajevo. He completed his primary and secondary education in Ljubljana and graduated in art history in 1966 at the Faculty of Philosophy in Belgrade. In 1969 he was appointed as professor at Ljubljana-Šentvid secondary school. In 1980 he started working at the Ministry of Culture as independent adviser on the protection of natural and cultural heritage and education. Korošec also headed the Conservation Centre of the Republic of Slovenia for several years since 1988. In 1997 he obtained his doctoral degree from the Department of Art History of the Faculty of Arts in Ljubljana where he lectured for 15 years on the art and architecture of the ancient world, special methodology and restoration. During his career as a researcher, lecturer, adviser and conservator Korošec worked with a number of scientific and higher education institutions, universities and cultural institutions from Slovenia, Croatia, Bosnia and Herzegovina, Montenegro, Italy, Austria, Germany, France, the USA, China, Israel and the Netherlands. Korošec concluded his professional path as councillor on restoration.
His projects spanned from scientific articles, a wide selection of research sketches, book and publication design and also some independent and group exhibitions in Slovenia and abroad.
Korošec received a national recognition, several awards and recognitions in Slovenia and elsewhere, and a Mirko Šubic Award for lifetime achievement (2016).

Museums on a Summer Night 2019 at the Bežigrad Gallery 1