CITY MUSEUM OF LJUBLJANA, Gosposka 15
10 a.m.–12 p.m. Ljubljana. History. City.
Learn about the history of Ljubljana, its important geostrategic position and to the extraordinary events in the history of the area, from prehistory to the 20th century. Among all the important moments, emperors, kings, and presidents, visitors of the exhibition also encounter everyday life in the city, as the exhibition presents the lives of regular people who lived in the city and left their mark on it.
10 a.m.–12 p.m. Honorary Citizens of Ljubljana. Recipients of the title and honour as witnesses of the city's history
The exhibition presents the recipients of this title and honour as witnesses to the city's history. Out of biographical data on recipients of this honour and the justifications made by city councils, mayors and committees on why certain individuals deserve this special honour we can discern and city’s story in the last two hundred years.
10 a.m.–12 p.m. (Un)discovered archaeology of Ljubljana: Archaeological heritage in an urban environment
The exhibition shows the latest finds from recent archaeological excavations done at the streets of Gosposvetska, Slovenska, Prešernova, Erjavčeva, the areas of Tribuna, Križanke, Dalmatinova Street and Vegova Street (KGBL), and in front of the University of Ljubljana.
10 a.m.–12 p.m. The transparent blue glass bowl
Visit the stunning archaeological find made of translucent blue glass and decorated with a relief and an inscription in Greek.
10 a.m.–12 p.m. ICONS. Treasures from Russian Museums
A selection of over 80 icons dating from the late Middle Ages to the 20th century coming to Ljubljana from the Russian museums. Entrance fee:  4 € / reduced 3 €
6 p.m.–9 p.m. Jump into the middle ages, workshop for children
Show your mettle as a cobbler's apprentice and make your own coin purse, then test your skills as a medieval scribe in writing and sealing important charters. All in the company of the puppets of Jurij the knight and Bruno the cobbler.

10 a.m.–12 p.m. Plečnik., permanent exhibition
The exhibition highlights architects' large and small, realized and unrealized architectural projects, presents original objects, models, sketches and plans, and gives an insight into Plečnik's private life.
10 a.m.–12 p.m. Plečnik as Inspiration, a collaboration with Faculty of Natural Sciences and Engineering
Through the products of students, the exhibition represents Plečnik's work as an inexhaustible source of inspiration for the young generation of artists.
6 p.m.–11.45 p.m. Free guided tours of Plečnik’s home
Take a guided tour to the originally preserved Plečnik's home. Guided tours are held for groups of up to 7 people (individual visits are not possible). Prior reservations are obligatory and possible on Thursday and Friday, 13 and 14 June, from 8 a.m. to 2 p.m. at prijava@mgml.si.
10 a.m.–12 p.m. Windows should be white, white, clean, a documentary film
A film, made by filmmaker and photographer Tone Stojko and produced by the Museum and Galleries of Ljubljana, presents the renovation of the Plečnik House in years 2013–2015.

JAKOPIČ GALLERY, Slovenska cesta 9
10 a.m.–12 p.m. Lucien Hervé: Geometry of Light, photographic exhibition
This exhibition of one of the great photographers of the 20th century was originally presented at the Jeu de Paume, Paris’ foremost photographic gallery. This exhibition introduces the visitor to the key themes of this immensely rich oeuvre: his early years and the emergence of his photographic language, his crucial encounters, the importance of Le Corbusier and of architecture, the photographer’s apartment, the interest in architectural contrasts that he developed during his travels, and finally, abstraction.
4.30 p.m. Lucien Hervé: Geometry Of Light, guided tour in English

MATCH GALLERY, Trg francoske revolucije 7
12 a.m.–12 p.m. Lighting Guerrilla: Borders
This year's Lighting Guerrilla is focusing on exploring the topic of borders. Like is tradition, the festival, with a strong collaboration of local and foreign artists, is coming to its end just for the Museums on a Summer Night.

BEŽIGRAD GALLERY 1, Dunajska 31
10 a.m.–8 p.m. Josip Korošec: Rememberings, Drawings and paintings
One of the most innovative artists in the field of drawing. His drawings are specific, drawn as if on a translucent membrane on an illuminated field. The works on exhibition are from the last decade, during which the author mainly devoted to create images from various archaeological sites.
10 a.m.–1 a.m. and 6 p.m.–8 p.m. Drawings with colour pencils

BEŽIGRAD GALLERY, Vodovodna 3
10 a.m.–8 p.m. Nika Zupančič: Side Vision, Paintings
The exhibition presents works of varying formats made by Nika Zupančič from the last decade. The painter developed her own specific style of painting very early on, which manifests in her works through the selection of content and motifs. Her paintings are inspired by themes from the natural world, its fragility and unrelenting decay.

THE EMONAN HOUSE ARCHAEOLOGICAL PARK, Mirje 4
10 a.m.–8 p.m. EMONA. Roman trail of Ljubljana, circular archaeological trail in the centre of Ljubljana
Take the trail tracing the 2000–year–old heritage of Emona. Discover the ancient town’s mysteries along a circular trail of Roman Ljubljana. Visit Emona. Enter a house from the Roman period. Locate Ljubljana’s first baptistery. Touch a Roman wall, and find the other ancient monuments in Ljubljana that combine into the two kilometers long circular trail.

THE EARLY CHRISTIAN CENTRE ARCHAEOLOGICAL PARK, Erjavčeva 18
10 a.m.–8 p.m. EMONA. Roman trail of Ljubljana, circular archaeological trail in the centre of Ljubljana
6 p.m.–8 p.m. Archaeological workshop with Honorata for families
Roman matron Honorata will take you to the ruins of the ancient city of Emona. Together you will create miniature mosaics and, like true archaeologists, excavate replicas of real Roman artefacts around the sandbox. You will also get a chance to try some of the culinary specialities from Emona.

FREE RIDES AROUND THE CITY

GoOpti transfer service will take make the exploration of museums and galleries on the Museums on a Summer Night much more comfortable as they will offer free circular rides between the main museum venues in Ljubljana. 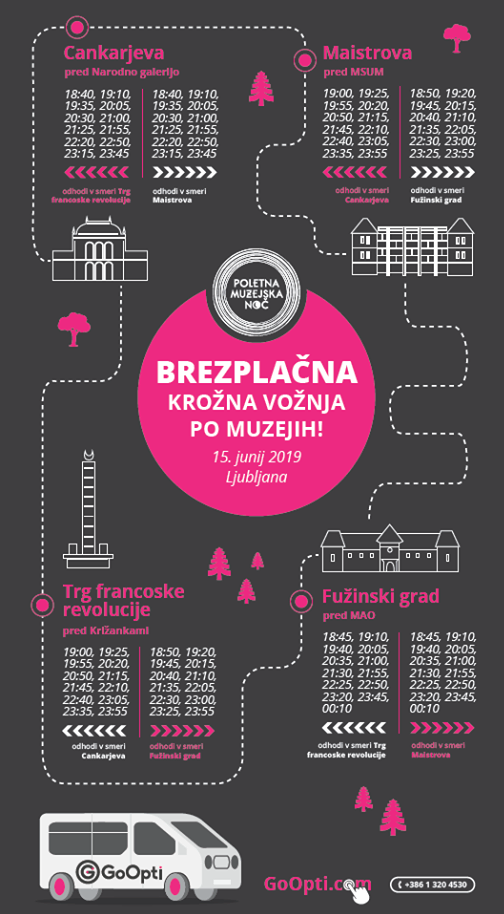