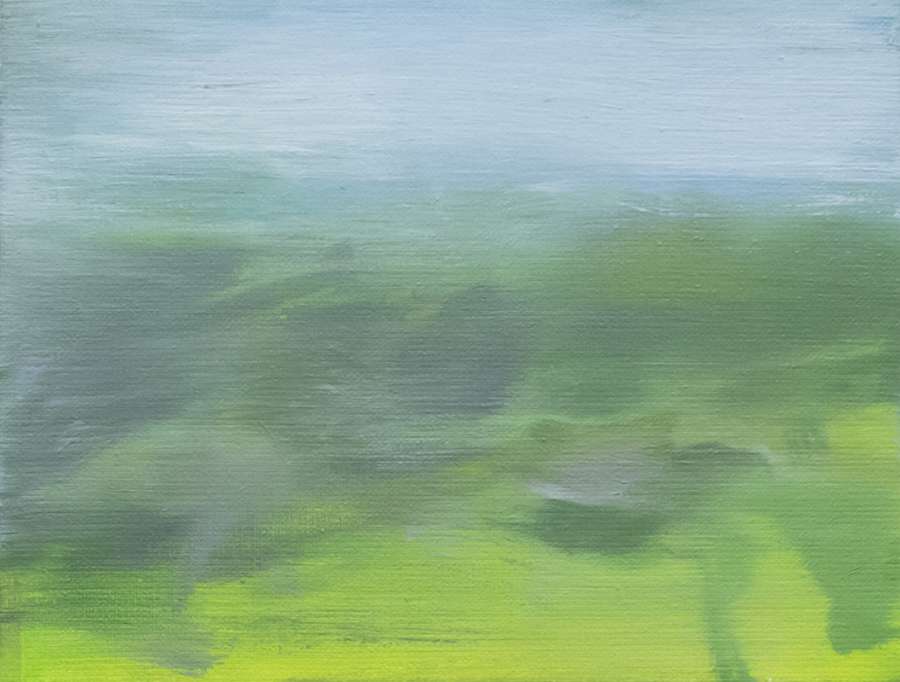 The exhibition will present works of varying formats made by Nika Zupančič from the last decade. The painter developed her own specific style of painting very early on, which manifests in her works through the selection of content and motifs. Her paintings are inspired by themes from the natural world, its fragility and unrelenting decay.

Passing
The natures of perception and consciousness
Nika Zupančič's works are characterized by a tendency to visualize the passing of time and to capture the transience of natural images that still show recognizale shapes of plants, leaves and landscapes. The artist visually renames the view on reality through the names of her works. Her images simultaneously reveal and obscure shapes and colours that are as real as those we experience in nature.
The works on display function as a sort of visual memories seen through half-shut eyes. They linger on the fringes of a reality that exists in the background of our visual and memory perceptions. In this state, they become almost ethereal, as though the very reality had a memory. Her visual worlds are intensely precise glimpses of the natural world, blurred and smeared, but only on a first glance. Each and every single one of our achievements is invaluable – and Nika Zupančič's vital and artistic perceptions preserve the worlds of nature and people. They exist right in front of us, in the flesh, but at the same time, they trigger remote parts of our memories, past views of natural landscapes.
None of her works (save for one) feature any representations of animals or people. What they contain, instead, is the vast loneliness of everything that is and exists, and also the endless unity. This is what keeps nature intact. Her depictions preserve reality, while also radiating the essence of her demeanour and will.
Miloš Bašin

Nika Zupančič was born on 30 August 1978 in Ljubljana. In 2003 she graduated from the Academy of Fine Arts and Design of the University of Ljubljana with a degree in painting, and obtained there an MFA degree in printmaking in 2008. She furthered her studies at the Amsterdam-Maastricht Summer University and study trips to Paris and Berlin. Her paintings (from the Leaves series) are included in the permanent collection Sammlung Essl, Kunst der Gegenwart, Klosterneuburg,Vienna.
Between 1998 and 2002 she conceived and organized several series of talks on contemporary art at the Academy of Fine Arts and Design in Ljubljana, entitled “Spaces of Art.” In 2002 she was a co-editor of the book Prostori umetnosti (Spaces of art), a collection of essays by fifteen authors approaching the subject of contemporary visual art from different angles. She is a member of the Association of Fine Artists of Ljubljana. She lives in Ljubljana.

Museums on a Summer Night 2019 at the Bežigrad Gallery 2