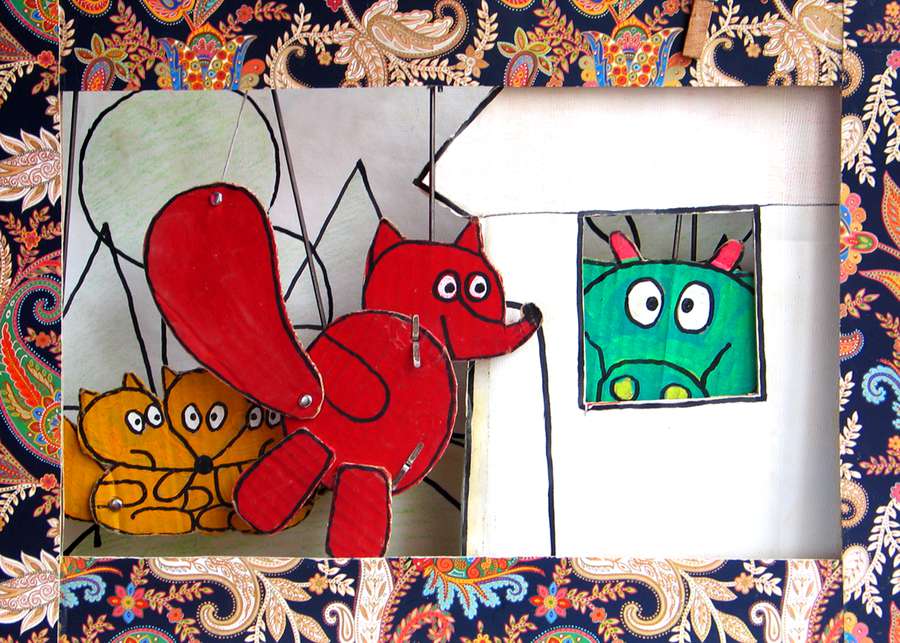 From Sketch to Puppet and Paintings

Having been staged annually by Bežigrajska galerija 1 ever since 1980, the traditional From Sketch to Puppet exhibition presents an overview of how an artwork is made, from the puppet sketch, scenery and scenic elements to the final product.This year's exhibition focusing on the Zapik puppet theatre is dedicated to puppet techniques using which Igor Cvetko and Jelena Sitar explore the medium of puppet theatres. One of their techniques of choice is the Japanese Kamishibai theatre.

Jelena Sitar, puppeteer, pedagogue and publicist
Sitar graduated in dramaturgy from the Academy of Theatre, Radio, Film and Television in Ljubljana. In the period 1983–1986 she worked as an independent expert advisor on theatre and puppetry at the Union of Cultural Societies of Slovenia. She freelanced as a dramaturg until 2007 and then took the position of creative director of Ljubljana Puppet Theatre until 2010. Now Associate Professor, she has been teaching puppetry and theatre at the Faculty of Education, University of Primorska in Koper since 2010.
Sitar directed around 50 puppet shows for professional and alternative theatres in Slovenia and elsewhere. She received a number of awards, including the Seven Secretaries of SKOJ Award for young Yugoslav artists, and several awards for best show. In 2010 she directed  When Shlemiel Went to Warsaw, which won the Maribor Puppet Theatre the highest number of awards in its history.
In recent years Sitar has devoted her career to exploring kamishibai as an art form. Her work garnered two expert jury recognitions at the two most recent Slovenian festivals.
In addition to her creative endeavours, she hosts puppetry workshops for children and seminars for teachers, theatre pedagogues, therapists and actors in Slovenia and abroad. She writes articles and discussions on puppetry for various newspapers and journals and attends scientific congresses. Sitar is also an author publishing her work in literary magazines for children.
Together with Igor Cvetko she wrote a book called Primeri detektiva Karla Loota (Detective Karl Loot’s Cases, DZS, Ljubljana, 1996), which is a blend of a picture book and a shadow theatre handbook. They were awarded the White Raven Award at the Bologna Children’s Book Fair (LIBRO) in 2000. She also wrote Zgodbe za lutke in prste (Stories for Puppets And Fingers, DZS, Ljubljana, 2001).
In 2018 her book called The Art of Kamishibai, an Artist’s Handbook, was published by Aristej Publishing House, Maribor.

Mag. Igor Cvetko, ethnomusicologist, publicist, puppeteer, kamishibai expert
As a researcher with 15 years of experience at the Institute of Ethnomusicology (ZRC SAZU) in Ljubljana, Cvetko for a decade lectured on ethnomusicology at the Faculty of Arts in Ljubljana and the Faculty of Education in Maribor.
He also worked as curator for spiritual culture at the Slovene Ethnographic Museum.
His collection of ethnographic materials for children was published in a number of reputable academic and popular books, including:

In 2015 Cvetko received the Štrekelj Award for lifetime achievement in ethology. Among other important awards in ethnomusicology are the Murko Award for mounting a major exhibition called Zvoki Slovenije, od ljudskih pevcev do avsenikov (Sounds of Slovenia - From folk musicians to the avseniks) in the Slovene Ethnographic Museum in 2008, and the Kajuh Award for the monograph Jest sem Vodovnik Juri (I Am Vodovnik Juri) about a Slovene folk singer (1791–1858).
Throughout his career Cvetko has also worked in children’s book illustration.
As for his creative endeavours in professional Slovenian puppet theatres, he mainly worked in design and music.
Cvetko is a terrific kamishibai artist and the winner of the 2018 Golden Kamishibai Award he received for the best kamishibai show at the 6th Festival of Kamishibai in Štanjel.

ZAPIK Theatre
Both biographies would be incomplete without ZAPIK Theatre in which Cvetko and Sitar joined their forces as artists and researchers. Zapik is the smallest puppet theatre in Slovenia. Its shows are regularly featured in extensive pieces of research and projects relating to ethnology, music, pedagogy and therapy.  The two artists created a show for babies and toddlers as early as in 1997. They merged documentary elements with artistic details, eliminated the foot of the stage and interacted with their young spectators as if they were co-creators of the show... Their performances are typically interactive, small in scale and minimalistic.
Once on stage, Sitar and Cvetko take the wheel and create the show from scratch. Zapik Theatre’s production boasts ten shows that took them across Slovenia several times, but most often to the coastal region. Their shows were featured at festivals in America, Canada, Kazakhstan, Europe and the Balkans. In 2008 they embarked on a 10-day tour from Oxford to Edinburgh and in 2016 represented Slovenia at the Kids Euro Festival in Washington. They pride themselves with a number of awards from festivals, particularly for their shows Miška kaško kuhala (Mousey Made Porridge) and Zgodba na gumbe (Buttoned Story).
Zapik and kamishibai are similar in that they are minimalistic and small in scale.
In 2009 Cvetko imported the first printed samples of kamishibai from Japan. In 2013 Zapik Theatre sparked widespread interest in kamishibai in Slovenia and Cvetko and Sitar have played a key role: they enthused interesting artists, organised a national festival and an international one just five years later. They have also established and headed the international symposium of the Slovenian Theatre Institute on the art of kamishibai.
Their kamishibai seminars inspired over 500 participants that together started a real kamishibai movement. Many of them have developed into great kamishibai artists, pedagogues and therapists. For some, kamishibai has become a way of life. In recent years, however, Slovenian kamishibai has gained global recognition.