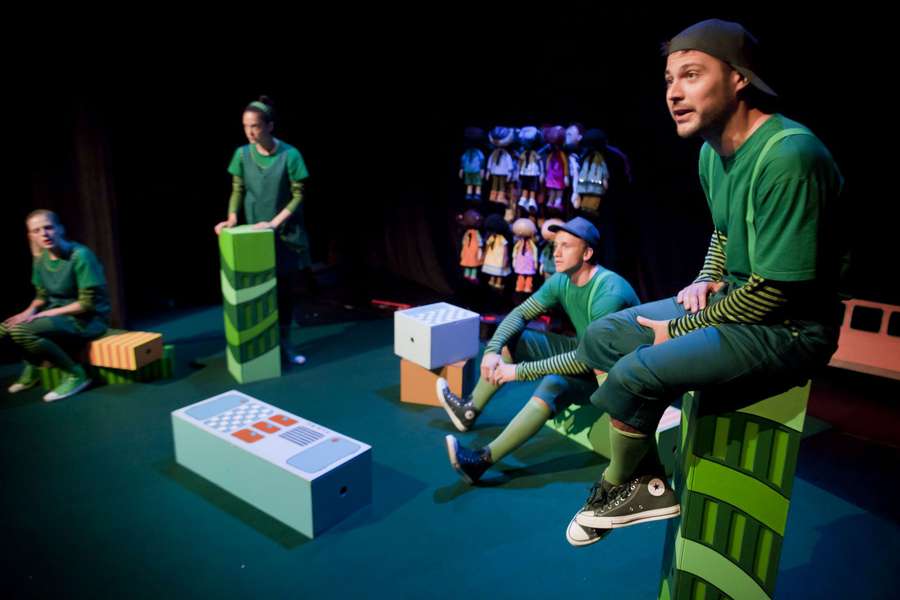 From Sketch to Puppet

This year's edition of the annual From Sketch to Puppet exhibition, which has been run by Bežigrad
Gallery 1 and 2 since 1980, is organised jointly with Mini Theatre Ljubljana. It features sketches,
puppets and stage design elements created by puppeteers Milica Grbić Komazec and Nikola Komazec for the children's performance All Here, All Together, which was staged in 2017 in Mini Theatre Ljubljana. The goal is to demonstrate the process of creating a work of art
from the initial idea to the final puppet performance.

From Sketch to Puppet, 1980–2022
The exhibition From Sketch to Puppet is the only traditional annual exhibition organised by Bežigrad Gallery 1 and 2 which is intended for the youngest visitors, and has been running since 1980. In fact, it now often happens that the exhibiting artists already visited the exhibition as children. The idea behind these exhibitions is to present the process of creating a work of art from the initial sketch, drawing, and sculpture, to the final puppet itself as a complete, fully realized work. In addition, the exhibitions provide an opportunity to display the works of artists who have dedicated their careers to puppetry and art for children. They rarely get to show their artwork in galleries, museums or puppet theatres, or show how a draft and sketch are eventually transformed into a puppet and a stage design element of a performance. Visitors get the chance to observe various drawing, painting and graphic techniques which serve as inspiration for the final visual appearance of the puppet performances created by puppet and stage designers in the workshops of puppet theatres. On display are sketches for puppets and stage designs as independent works of art.
Miloš Bašin
Milica Grbić Komazec
In 1999 Grbić Komazec graduated in stage costume design from the Faculty of Applied Arts in Belgrade, and obtained her master's degree from the same faculty in 2004.
Since 1996 she has created the visual appearance of over 140 theatre performances, children’s and puppet plays, and designed costumes for more than 20 theatres in Serbia and abroad.
She works as the permanent costume designer of the Novi Sad Youth Theatre.
Grbić Komazec created the puppets for two children's puppet series.
She also lectures on puppetry at the Faculty of Applied Arts in Belgrade, at the Departments of Stage Costume and Scenography.
She has received numerous awards for her work at theatre festivals around Serbia.
Nikola Komazec
Maker of puppets and sets
Komazec has created the scenography for more than 200 theatre, film and TV productions, and makes puppets and props for theatre and television. He has collaborated with many theatres in Serbia and the region. From 1999 to 2007, he was employed as a puppet designer, painter and sculptor in the "Duško Radović" children's theatre in Belgrade.
Komazec graduated from the Secondary School of Fine and Applied Arts in Belgrade in 2004. Since 2011, he has been running the "Mini čebelice" art workshop in Belgrade.