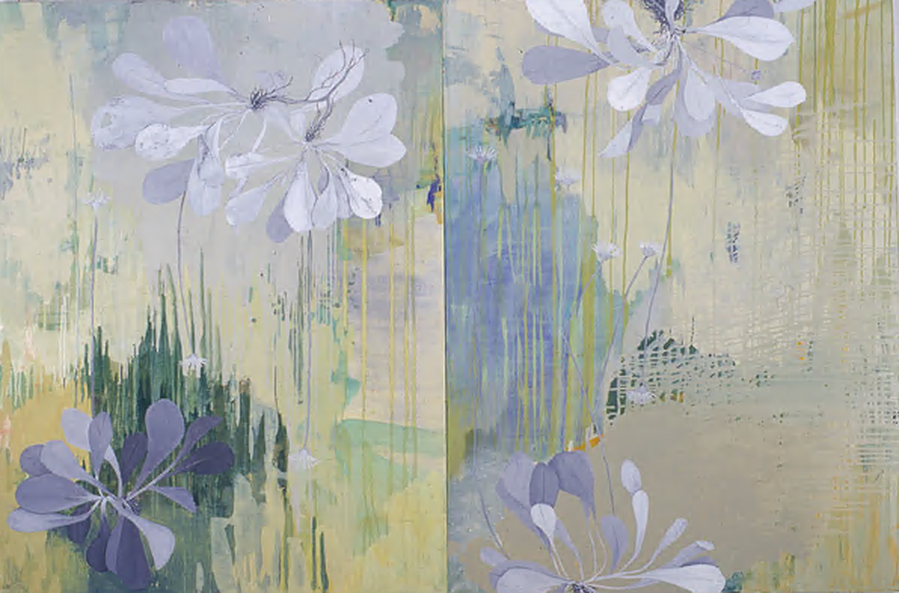 Flora of the World

This is a retrospective exhibition of paintings created by the artist who draws inspiration for her artistic exploration from plants and flowers. Nature, a dominant motif, has followed her through life from a tender age. She uses it as a means of interpreting reality and also life in general. In her own unique way she applies classical techniques, such as oil and egg tempera, and blends them with modern dripping techniques to create artwork brimming with incredibly thoughtful sensibility.

From single depictions of plants to complete scenes of forest vegetation and the world
The exhibition of paintings featuring plants from the start of the 21st century shows clover as the prevailing motif, with the plant having appeared in Anja Jerčič's artwork since 2004. In the most recent period, however, tree motifs have prevailed. The paintings are characterised by a vivid whiteness illustrating the way the sun highlights certain surfaces. Similar to the way sunrays pass through treetops and reach as far as they can. Towards the earth. And it is right there where we can see and feel them: from bottom to top, up to the peak. The same holds for the soil cradling the plants Anja Jerčič saw, painted, and reproduced.
Clover first appeared in the artist's artwork in 2004 and became the dominating motif in 2006. In designing the set-up of her exhibitions, she sometimes combines clover with depictions of plants she once found and observed as a child in her parents' and grandparents' homes. She felt like a human could not possibly have painted or created them in any way. The cycle called Florilegium of Memories is included in the exhibition. Jerčič draws inspiration for her exhibitions from motifs of roses and various meadow plants she observes at home. Similar and very precise representations of plants for scientific research purposes were once common in earlier centuries. Jerčič paints the plants with precision and accuracy, while transposing them into her artistic world, one that is just as real as the plants she depicts.
The artist thus brings to the fore the entire plant, including its root system, a move which hints at scientific drawings. These are often placed within an oval shape to further emphasise and preserve them forever.
Miloš Bašin