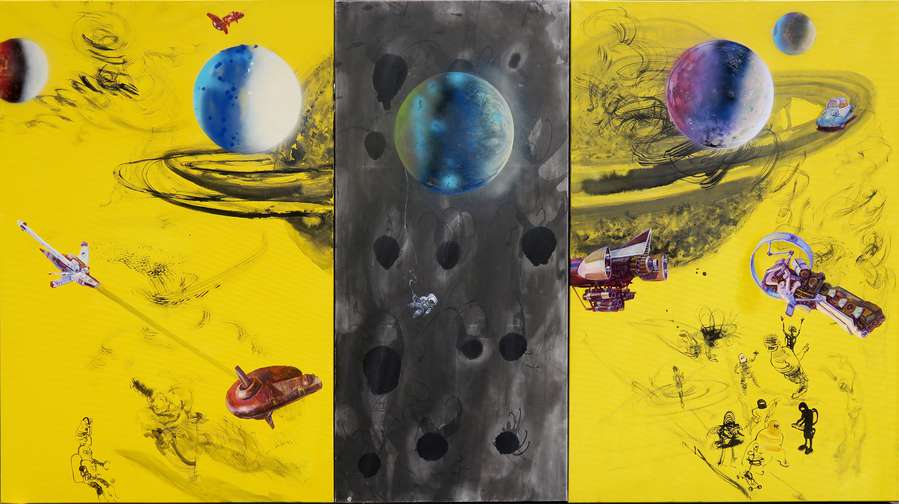 Milan Erič held his first exhibition at Bežigrad Gallery 1 together with Zvonko Čoh in 1984. Two years later their animated film Try to Wink Twice was screened in the same gallery, as was their film Socialization of the Bull?, which was shown alongside the corresponding drawings in 1998. Erič held another exhibition of drawings in Bežigrad Gallery 1 in 2004 called Black and White.

Dynamic glowing shapes in the unknown
In some paintings by Milan Erič one can spot passing shapes that resemble heavenly bodies, particularly comets.
Paintings depicting floating aliens are further proof that the author gets inspiration from exploring space.
In the rest of the artwork we can observe unknown shapes that may well be machines and mechanical structures seen from above, from a bird’s-eye view. Or from flying over new, dark landscapes. The unknown formations that consist of several pieces seem to move at great speed over pitch black firmaments. The paintings thus look as accurate as camera photos.
The abstract transforms into a concrete, clear and real vision of something fantastic and unknown. The unknown becomes evident. So real that it is entirely believable.
Miloš Bašin

The cycle is called “NGC: New Galaxies Catalogue”.
The minimalistic and repeated aesthetics aims at animating the viewer’s gaze through rhythmical structures, thus creating seeming movement. The viewer travels across various structures and shapes blending together chaos and order with coincidental formations and their groupings on larger formats. The structures of individual shapes combined with other structures create a rhythmical unit. The objects standing in front of specific drawings build an extra three-dimensional space, thus connecting the flat painting surface with the space hosting the viewer.
Milan Erič

Milan Erič was born on 31 October 1956 in Slovenj Gradec. In 1979 he graduated in painting from the Academy of Fine Arts with Professor Janez Bernik, and two years later completed his specialisation in painting. In 1980 he received the Prešeren Award for students for his drawing accomplishments. In the period 1981–1982, Erič studied printmaking with Professor Bogdan Borčič.
Later on he worked in painting, animated film and illustration. His paintings and drawings have been displayed in a number of solo and group exhibitions in Slovenia and elsewhere. Among them were the Immagini exhibition at the Loža Gallery in Koper in 1981, curated by Andrej Medved, and the Yugoslavian and Italian New Image show a year later. At that time Erič joined forces with the academy-trained painter Zvonko Čoh to shoot the animated film Try to Wink Twice, which earned them Mladina's Golden Bird Award in 1983 and in 1988 the Župančič Award and an award at the international Festival of Animated Film in Stuttgart. In 1986 Erič became qualified as Assistant Professor at the Academy of Fine Arts in Ljubljana and got a job in the same year as drawing lecturer at the Department of Fashion Design of the Faculty of Natural Science and Engineering. In the period 1988–1990, he threw himself into newspaper illustration for the weekly Mladina and book illustration for the Mladinska Knjiga publishing house. Between 1985 and 1998, he and Zvonko Čoh worked on their animated film Socialization of the Bull?. In 1998 the film received the Award for Best Feature Film at the Festival of Slovenian Film, in 2000 the Prešeren Award and the humour award at the Festival of Animated Film in Stuttgart in 2001. In his academic career, Erič started working as Professor of drawing and painting at the Academy of Fine Arts in 1994.
In 2014 he held a retrospective exhibition at the City Art Gallery Ljubljana. In 2006 he received the Hinko Smrekar plaque at the 9th Biennial of Slovenian Illustration, and in 2019 the Hinko Smrekar Award at the 13th Biennial of Slovenian Illustration. In 2019 he was awarded the Rihard Jakopič Prize for lifetime achievement, and together with Zvonko Čoh he received the award of the Slovene Animated Film Association. Erič is a member of the Slovenian Fine Arts Society.