"You are transient, only your works preserve your memory"

"At this hour we say our final goodbye to a role model, an educator, master, and, finally, a fighter. We are taking responsibility for the bright character of a creator and for the principles of his timeless work," architect Vladimir Mušič thus ended his eulogy at the funeral of Jože Plečnik, in the name of all the professor's students. In 2017, we commemorate the 60th anniversary of the death on 7 January, and on 23rd January also the 145th anniversary of the birth of this great Slovenian architect that left an indelible mark on Vienna, Prague and, most of all, his Ljubljana. 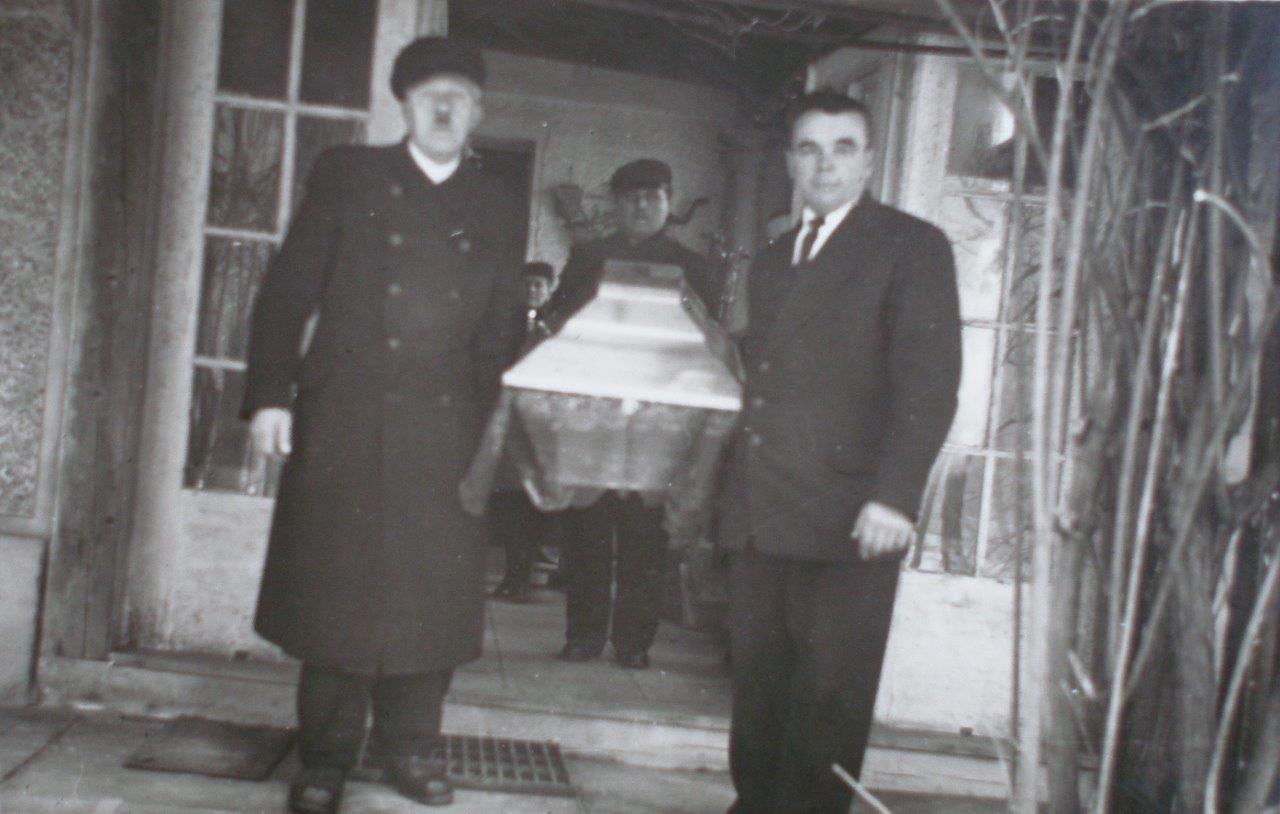 Saying goodbye from Jože Plečnik: Plečnik’s casket is being carried from his home in Trnovo, 9 January 1957 © MGML documentation

Jože Plečnik, the most important Slovenian architect, left his mark on three European capitals: Vienna, Prague and, most of all, on his hometown of Ljubljana. Here he worked from 1921 until his death. With his instantly recognisable timeless architecture, "architecture perennis", he significantly transformed the city into his vision - a national capital after the example of an ancient polis.
In Antiquity Plečnik sought to understand of forms and shapes developed at the beginning of architecture and from it he drew inspiration for his recognisable language. Judging by the diversity and size of his oeuvre, Plečnik belongs among the most important architects of the 20th century as well as among the last universal artists.

He passed away on 7 January 1957 in his home in Trnovo, and he is buried in the family grave at the Žale Cemetery in Ljubljana.

Ljubljana’s last goodbye to this great architect was truly magnificent. After the first day, his body was moved from his home in Trnovo to the lobby of Ljubljana’s university. His students held a guard of honour for him until the day of his funeral, 10 January. On that day he was transported to his Žale, to the Chapel of St. Nicholas, at 2.30 pm. The funeral ceremonies in the atrium of Žale were attended by many important representatives of cultural institutions and a large crowd of mourners gathered to accompany this great man on his last path.

Josip Vidmar, the first president of the Slovenian Academy, who was the first to say his goodbyes, stated, “We are all standing shaken in front of this casket, from which this great maker of our culture is saying goodbye from us. He was a great artist, a great designer of objects in space and of space itself. His inexhaustible drive reminds us of the great masters of the Italian Renaissance. He never was an innovator, but always new and original. He drew inspiration from the wealth of past eras, but everything he created was infused with his spirit and heart, which were contemporary and fit for these modern times. He made his own monuments. The writing on their walls reads ‘Live a clean, sacred and dedicated life.’ I am sure that many generations after ours will live with his spirit, which will remain among us and also exist in the future.”

Two more speakers came after Josip Vidmar: the dean of the University of Ljubljana Dr. Božidar Lavrič and head of the Department of Architecture at the Technical Faculty Janez Valentinčič, whose warm and grief-stricken words painted a picture of Plečnik as a colleague and professor. Speaking for the Architects’ Society of Slovenia was Danilo Fürst, while Vladimir Mušič gave the eulogy in the name of the students of architecture.

“Many were surprised at how Plečnik retained his freshness and lucidity throughout his life. He would never wonder about that himself, as he never thought of old age or death. They say that he, almost completely seriously, claimed that things only became clear in old age, and that true architects should never publicly work before they turn seventy.
Yes, Plečnik did not feel the sterility of old age. His body grew weaker, but his spirit was still fresh and full of creative force. The beauty and joie de vivre that Plečnik revealed in stone, wood and metal, are just a fragment of the immeasurable and unknown wealth, living exuberantly within him, that was his life itself. He thought very little of himself and this ordinary world with its afflictions and joys. Even at the hour of his death he remained what he had been his whole life: an artist. His last words were dedicated to Beauty. His niece, who was with him through it all, recalls, “He was conscious until the end. Completely calm and didn’t lament about any pain. His last words were ‘Windows should be white and clean.’ Yes, those were his only words before his last breath.”
This is what Ciril Zlobec wrote about Plečnik, only days after the architect’s death, in the article A Man Who Did Not Think of Himself, published in Dnevnik Newspaper, 18 January 1957.

In 2017, the Plečnik Year, the Museum and Galleries of Ljubljana are preparing a comprehensive programme of exhibitions and events to honour both jubilees. The first event is this Saturday, 7 January, with an open day at the Plečnik House.