On Friday 31 May, the atmosphere on the Croatian island of Veliki Brijun was especially ceremonial, as the exhibition Plečnik on Brioni opened there. The exhibition presents Plečnik's last fully completed work – the garden pavilion dedicated to President Tito. This also presented a unique opportunity for visiting the Plečnik pavilion in person. 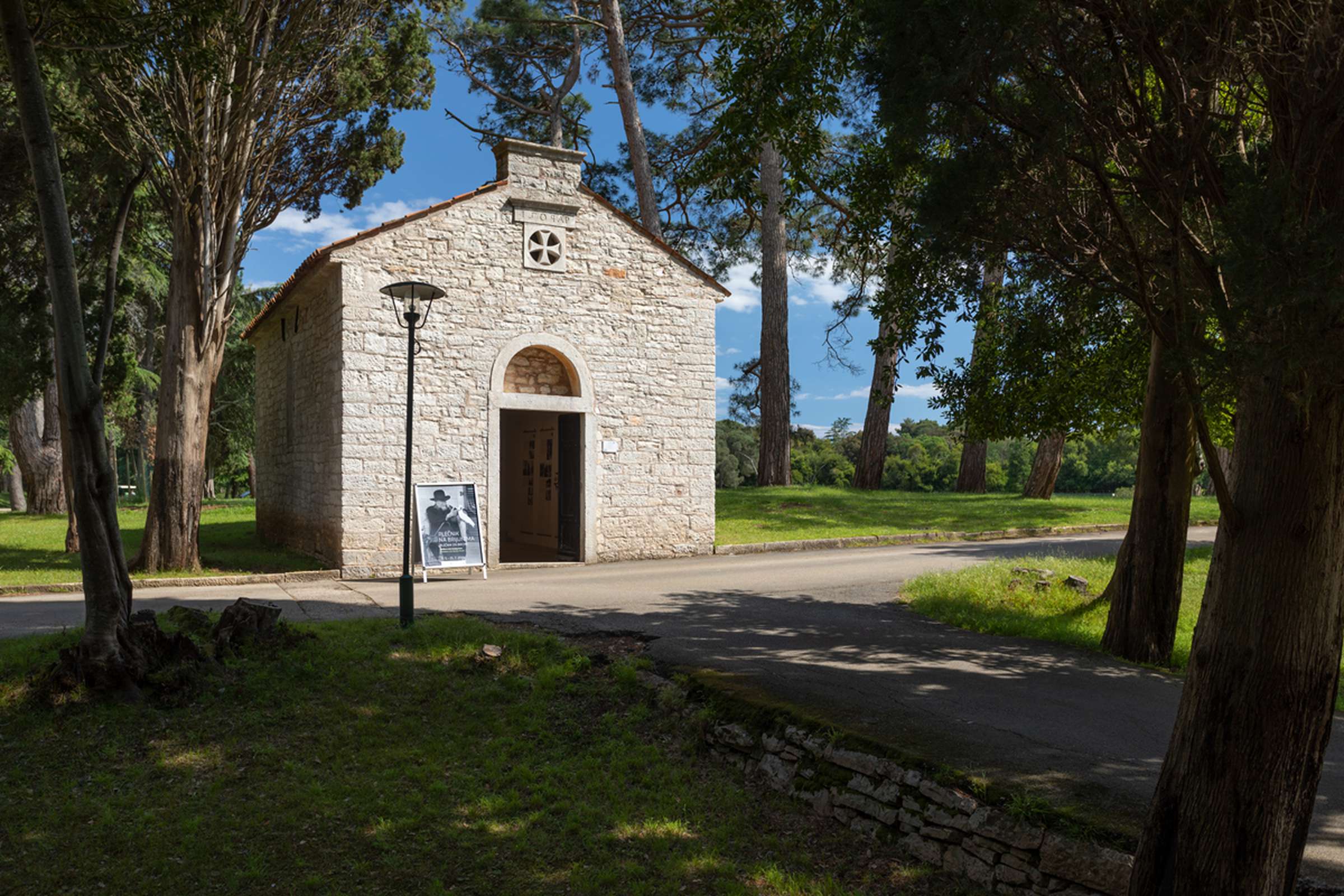 Church of St. Rocco on the Veliki Brijun Island, location of the exhibition Plečnik on Brioni © Andrej Peunik/MGML

“It is difficult to describe the commotion and expectations of the 200 participants in the event, half of them being experts on the matter and the other half consisting of autochthonous Slovenes living in Croatia. All of them had their first opportunity to experience the garden pavilion in all of its beauty, as this is a protocol area and thus closed for the public.” These were the words of Nataša Mihelič, journalist, who prepared a report on the special event in Brijuni for the show Kultura po Odmevih on TV Slovenia (here).

We began our Friday afternoon with a ceremony at the opening of the Plečnik on Brioni exhibition, located inside the idyllic small church of St. Rocco on the Veliki Brijun Island. The exhibition is a collaboration from 2017 between the Plečnik House and the National and University Library (NUK), which was made possible by a precious donation from Dr Lojze Gostiša. The opening was accompanied by several speeches – that of the host, Dr. Marno Milotić, Director of the National Park Brijuni, Ms. Lorella Limoncin Toth, Head of the Conservation Department in Pula, who served as the representative of the Croatian Minister of Culture Nina Obuljan Koržinek, and Dr. Smiljana Knez, Ambassador of the Republic of Slovenia in Croatia. The event was also elevated by Slovenian songs performed by the mixed choir Encijan of the Slovene Cultural Society Istra.

After the opening we boarded the tourist train, which took us toward the White Villa, used by President Tito for governmental visits in the time of Yugoslavia. Today it serves as a protocol facility of the Croatian Government and is, as such, inaccessible to the public. Through the endeavours of the Embassy of the Republic of Slovenia in Croatia, we were granted access to this heavily guarded part of the island where we were then able to visit the Plečnik pavilion.

As Ana Porok, curator of the Plečnik House, explained to the radio journalist Tanja Borčič Bernard, "The pavilion was meant as a gift to President Tito (fn. from the Federation of Associations of Combatants of Slovenian National Liberation Army) and is, as a whole, a total work of art, a combination of architecture and sculptural decoration made by Slovenian sculptors". As the journalist also summarised the co-author of the exhibition Marijan Rupert of the National and University Library, the pavilion's construction near the White Villa, where Tito often stayed, was a great challenge to Plečnik and also a realisation of his youthful wish to build in the Mediterranean environment (here you can listen to the report on the event, created for the Svet kulture show on Radio Slovenia).

The event concluded with a symposium on Plečnik as a Slovenian and European architect. Various experts (Marijan Rupert and Žiga Cerkovnik from NUK, famed Plečnik expert Prof. Peter Krečič, Prof. Robert Pljić from the Faculty of Civil and Geodetic Engineering in Split and Prof. Luka Skansi from the Faculty of Humanities and Social Sciences in Pulj) presented different aspects of Plečnik's oeuvre and emphasised the exceptional importance of Plečnik's work in European architecture.

The Embassy of Slovenia in Zagreb and the National Park Brijuni executed the event flawlessly – for which we express our exceptional gratitude. We would also like to invite you to visit the exhibition Plečnik on Brioni – on view until 25 July 2019.