The Story of the Škorjanc Chalice Carries a Rich Symbolic Message

If you noticed the poster or visited the exhibition Plečnik and the Sacred, Jože Plečnik, Slovenian Architect and Designer, you have surely seen the Škorjanc Chalice as the exhibition’s iconic artefact. Its photograph is on all accompanying publications. What is the story behind this unique chalice was lately entrusted to us by the relatives of the priest Jože Škorjanc. 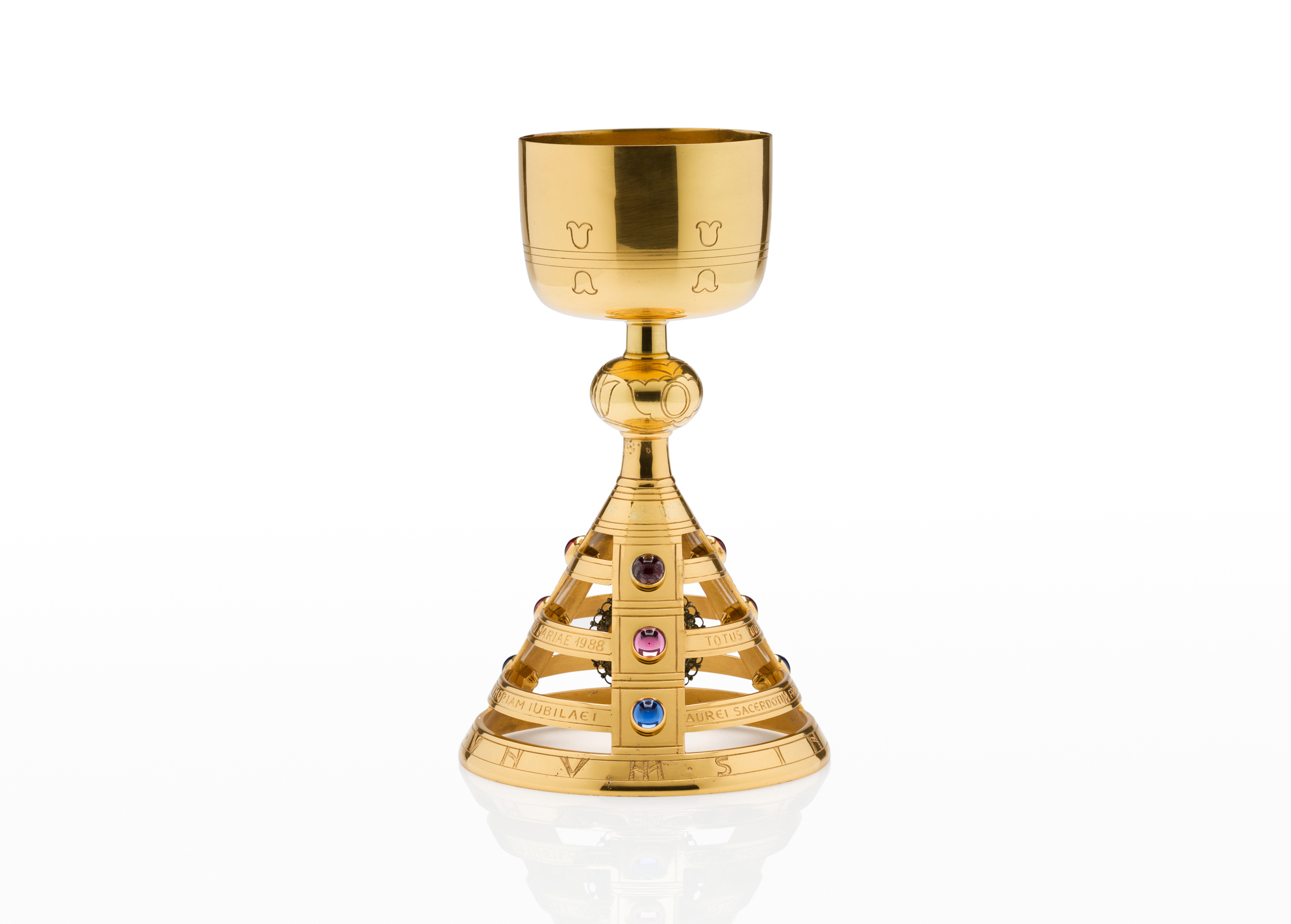 A little while ago, curator Ana Porok met with the relatives of the priest Jože Škorjanc. The latter turned to Plečnik in 1950 with a wish for the architect to design a chalice with which would serve Škorjanc as a symbolic monument to his two deceased predecessors – his uncles France and Matija Škorjanc, both priests that reached their golden mass.

The reason for the chalice’s order, which the priest Jože Škorjanc named AERE PERENNIUS (MORE LASTING THAN BRONZE) was a gold coin, which Mr. Škorjanc received from Mrs. Matelič from Kargujevec, where he was working at that time. He took the coin to Plečnik and explained his wishes to the master architect. Plečnik was very welcoming of him and promised he would work on the plans for the chalice.

Before the next visit, Plečnik prepared several detailed designs and, at the end, even showed the priest a free-hand graphite drawing, which eventually became the selected design. The three legs supporting the chalice are connected with parallel rings, which represent the connection between the three related priests. The Latin lettering on them explains the symbolism in more detail, as the lower ring of the basis has the phrase UT OMNES UNUM SINT (That they all may be one), while the second one adds: IN MEMORIAM IUBILEAI AUREI SACERDOTUM FRANCISCI ET MATHIAE ŠKORJANC 1950 (In memory of the golden jubilee of priests Frančišek and Matija Škorjanc). When Mr. Jože Škorjanc achived his own golden mass, he engraved the last lettering on the middle ring: IOSEPH ANNO MARIAE 1988 TOTUS TUUS (Jožef, in Mary’s year of 1988, all yours).

A peculiarity of the chalice is that Plečnik decided against melting the gold coin for the gilding process, for which the coin was originally intended. Instead, he hung it under the cup. Therefore the gold coin depicting the Birth of Jesus on one side and the Baptism of John on the reverse, can still be seen through the openings of the conical base. It is decorated with various semiprecious stones and circular pieces of glass. The cup’s rim is engraved with stylised lilies.

The chalice was made in Ljubljana, under the watchful eye of Plečnik, by the girdler Alojzij Pirnat and was blessed by the archbishop Anton Vovk. Once the chalice was completed, Mr. Škorjanc wanted to settle the bills, but master Plečnik refused payment for his work. This was an extraordinary gesture, which Škorjanc repaid by dedicating a holy mass to Mr. Plečnik.

The unique chalice tells us a beautiful tale of respect and the closeness that existed in the Škorjanc family. The Škorjanc family tomb at the Prebold cemetery was made in 1989, also after a design sketched by Plečnik in 1953.

For all the information, which depicted a much clearer picture of the process on how this unique artefact of our cultural heritage was created, as well as for the donation of the documentation to the collection of the Museum and Galleries of Ljubljana, we sincerely thank the family Škorjanc from Dolenja vas pri Preboldu.

Share:
Jože Plečnik. The Architect’s Heritage. Right Around the Corner.
Atlas of Furniture Design
A Treasured Donation: Plečnik’s “spikes”
For the 100th Anniversary of the University of Ljubljana, the Mayor of Ljubljana Presented the University’s Rector the Rector’s Chain Made after Plečnik’s Original Designs
The Catalogue and Exhibition Graphics of the “How to Draw a City?” Project Convinced the Jury of the Brumen Award