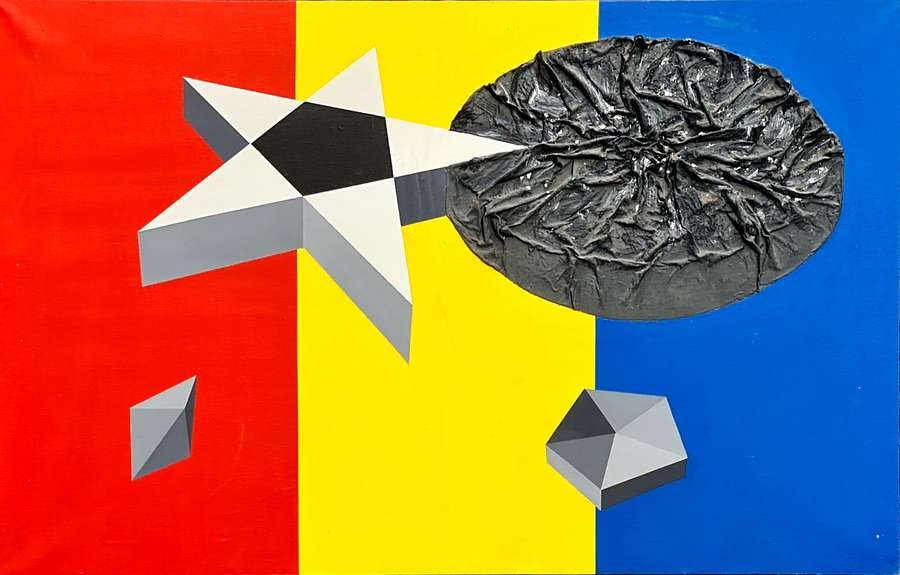 Paintings and objects one of our most important authors of the 20st century - Colletions Dušan Arzenšek.

Dušan Arzenšek text
When I returned home from my first big Asian trip to Iraq, Iran and Afghanistan in 1974, I could no longer live without photography. In my heart I carried vivid images of Iraqi deserts, Afghan mountains... and I felt so overwhelmed at the time that I could barely make a step without my camera. I even carried it to most of the lectures at the Faculty of Law. After the lectures, I regularly went to a legendary bar called Šumi, which was a popular hub for artists, the avant-garde and philosophers in the 1960s and 1970s. That’s where I first met Tugo, who’d just returned from the USA and was in year three of the Academy of Fine Arts. We were wild, especially Tugo.
At the age of 18 I found myself in the company of theatre artists and other creative souls who inspired me immensely. Tugo was Pekarna Theatre's scenographer at the time. I remember plays such as Like That, Like That! (Tako, tako!) by Ljubiša Ristić or Shall I Sprinkle You with Leaves (Naj te z listjem posujem) by Rudi Šeligo, and artists like Lado Kralj, Milan Jesih, Tomaž Kralj, Ivo Svetina, and Dušan Jovanović. The theatre was small, no more than 50–60 m2 in size, including the seating area. It could only accommodate an audience of 40, and every scenography was a logistic challenge. That tiny space housed four scaffolding scenographies for the play Like That, Like That!. The play Shall I Sprinkle You with Leaves featured real leaves, which we scattered anew for every performance, and don't even get me started on the car that was cut in half. They say that Tugo introduced hyperrealism to Pekarna's stage design, but he calls it conceptual art. He needed a technical team for his scenographies, so he invited me to join and co-create the plays.
Pekarna Theatre was magical. We toured around Europe and the Balkans. Tugo was my teacher. He taught me how to observe the world around me. But whatever he did, he was primarily a painter. My love for everything visual and for photography only grew because of him. I passionately took in everything that was happening in the theatre: words, objects, verses, paintings, actors, costumes, scenes... and all of that merged into plays that crucially shaped my dedication to and love for art. I also contemplated the importance of visuality. To see things in new dimensions – Tugo helped me with that through his outstanding ability to observe and materialise his dreams on canvas. And the canvases had to be as large as possible. Tugo still prefers large canvases. He loved theatre, but he is a painter on a large scale.
Dušan Arzenšek

Tugo Šušnik text
Ljubljana was an interesting place when I returned from New York in 1968. It was caught in the sudden grip of the modern world, a strategically important transit hub for the East and the Levant, but inextricably linked to the West and its cultural revolution of that time. The sudden and unexpected cultural openness of Yugoslavia at that point was something amazing, and those who lived in Ljubljana suddenly knew and had access to just about everything.
My artistic path started in 1971 when I got accepted into the Academy of Fine Arts. I took my entrance exams next to Jože Slak (Đoko), who was an extreme individualist with an amazing imagination. We were friends throughout our studies and later in life. I admired the talent and fervour of Tomo Podgornik. I adored heated debates with Sergej Kapus, a prominent intellectual figure, our endless discussions and conflicting opinions on modern fine art.
I met the two most important people between 1969 and 1972: Taja and Tomaž Brejc. As a spiritual, altruistic, well informed, cosmopolitan couple, they dedicated all of their time to modern art in Slovenia and Yugoslavia. In the second half of the 1960s they opened a dialogue on conceptual art, and we were honoured to have come across the OHO Group – a Yugoslavian and global phenomenon.
The couple played a pivotal and vital role in popularising Slovenian modern fine art by cultivating a circle of enthusiasts and collectors. In fact, Taja was the one to establish the modern fine art market in Slovenia, and promoted Slovene modern fine art both here and abroad. Their legacy lives on through Equrna Gallery, private collections, banks, art in interior design, publications, and so on.
Right after I enrolled in the Academy of Fine Arts, I started painting privately: at first at home and then in various rented places, attics, holes and dens I called ateliers.
In the 1970s, which were known as the era of post-conceptual art, I wanted to earn some extra money besides painting, so I worked as scenographer in Pekarna Theatre (Gilgamesh, Shall I Sprinkle You with Leaves (Ali naj te z listjem posujem), Like That, Like That! (Tako, tako!), etc.) While working on the play Like That, Like That!, I met Dušan Arzenšek, a tall and amiable high school student who was part of the technical team for the play Cinnamon Door of the Ship of Fools and Other Changes (Cimetova vrata ladje norcev in druge spremembe) by Tomaž Kralj. We became friends right away.
Dušan, nicknamed Duši, is a photographer, a visual type. In our lifelong friendship, Duši and his partner, my dear friend Karin, and my lovely Katra, have lived through many things, travelled the world and visited some of the most important collections in the West in New York, London, Berlin, Vienna, Rome, Madrid, etc.
Duši started collecting my artwork in the 1970s and continued year by year, building up his collection. He gradually amassed a fine selection of my work from different periods of my life, and got a fixed idea to arrange an exhibition. An exhibition of my artwork.
You should know that if Duši dreams up an idea, he uses all of his will, persistence and ambition to turn it into reality. He crosses borders, fights cultural bureaucracy, the institutional world of bureaucrats, curators, trustees, directors... a myriad of administrative intermediaries and others who are arrogant towards authors, the individual selection of works and collectors' tastes.
Patrons and collectors were crucial for the survival and development of Slovene culture, and will forever be etched in its history. Private collections of Slovene art constitute a major element in our nation’s culture. They document a historic interaction between artists and their public at a specific moment in history, and attest to the relevance of such artwork both in Slovenia and abroad.
I thus hope to see more exhibitions of this kind.
Tugo Šušnik 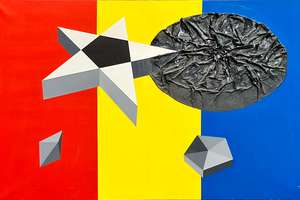