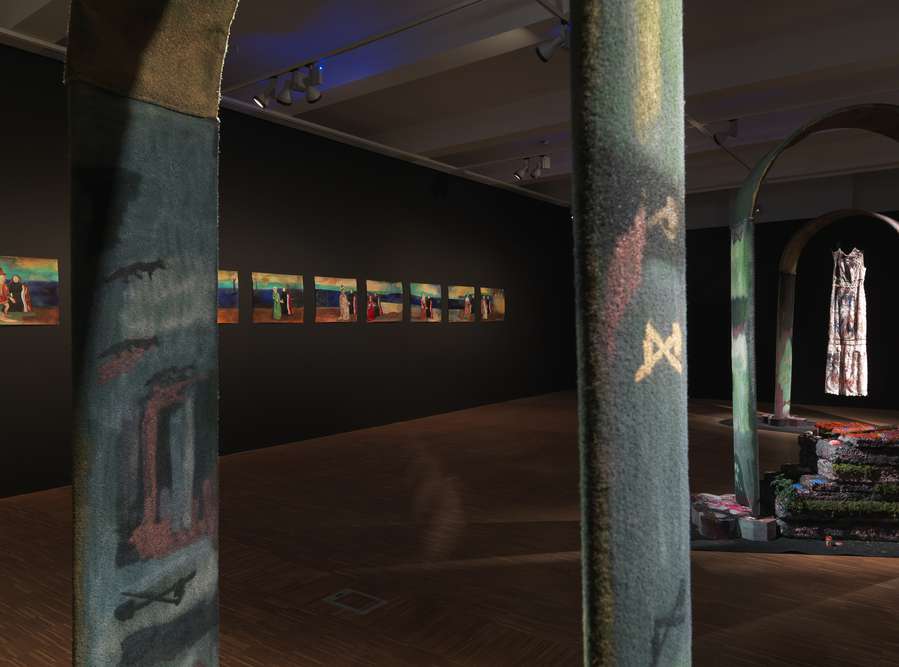 Work of Hili Greenfeld include relics, graves, and shrines – artificial versions of such objects, i.e. objects that testify to our inability to capture time and comprehend its meaning. By combining paintings, sculptures, ready-mades, and stories, she creates environments that are like scenes of private recollection.

The most important events in one’s life, such as birth, marriage and death, are universal and have always been represented in art as well. Many are formalised by rituals, which are essentially performative acts. Regardless of whether these stem from religion or culture, they represent a re-enactment of the first ever ritual to have taken place in history and hence a link between the present and the past. Three months ago, Hili Greenfeld (1981, Nahariya) and her partner had an unorthodox marriage in Israel, which is not recognised by the state. Therefore, on the opening of her exhibition, she and her partner will perform a civil marriage ritual. For the artist, the wedding in Ljubljana will be a performative act which will be recognised in the state of Israel. However, it will turn her first wedding into a performance. Through her re-creations of relics, graves and altars, Hili Greenfeld tends to raise the awareness about the inability to measure and understand time, a dimension that is accessible to us only indirectly – by rekindling our memories, storytelling, performing rituals, and keeping objects that show signs of the past. In her practice, which spans paintings, sculptures and ready-made objects, she constructs environments in which rituals take place.

Greenfeld has based her current project on the late medieval frescoes of the Dance of Death in the Holy Trinity Church in the village of Hrastovlje. The frescoes show people from all social strata moving towards a freshly dug grave, each escorted by a skeleton representing their deaths. Greenfeld creates eleven paintings by using figures borrowed from the original and by replacing their skeletal escorts with her own symbol of death. The latter is a copy of a figure with a piano keyboard drawn by a six-year old child, a boy whom the artist was very fond of and who died. The polyptych preserves the visual continuity of the doomed line-up in the original with colour bands and with rhythmic stringing of figures that invite the viewer to take part in the sequences of stopping and moving towards and through the second element of the installation, represented by three arches. These are set up as altars. The artist has decorated them with symbols from the frescoes of the Holy Trinity Church, and in her own unique style, covered them with synthetic grass, coloured with graffiti sprays and adorned with little madeleines, one of the most recognisable metaphors for a sensory experience which unexpectedly unlocks the door to the memory of the forgotten past. The last arch is not conceptualised as a point of transition but rather as a “trash the dress” altar. It is where the artist will hang her wedding dress, after she is done using it to perform the civil marriage ritual in Ljubljana and treating it with pigments and materials such as salts, glues and artificial dust.

CC Tobačna 001 is hosting Israeli artist Hili Greenfeld, as she was selected to be an artist-in-residence at the Tobačna 001 CC following a call for applications published by the Israeli Center for Digital Art in Holon, with which our Residence Center has been collaborating for five years now. Her creations include relics, graves, and shrines – artificial versions of such objects, i.e. objects that testify to our inability to capture time and comprehend its meaning. 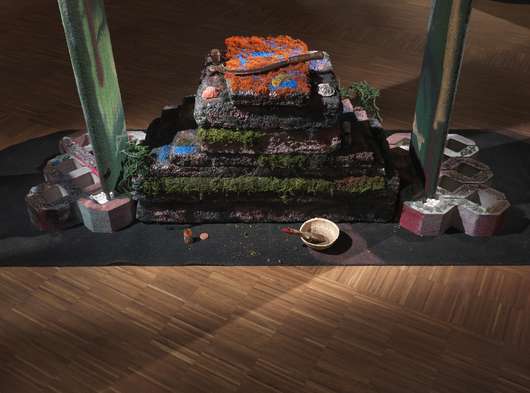 Thu
Nov 2016
Guided tour
6 p.m.
Cultural Centre Tobačna 001
Guided tour of the "The Moly Matrimony" exhibition
You are cordially invited to join us for a guided tour of "The Moly Matrimony" exhibition with the curator Alenka Trebušak. Through her re-creations of relics, graves and altars, Hili Greenfeld tends to raise the awareness about the inability to measure and understand time.
All events - Cultural Centre Tobačna 001 • All events - MGML