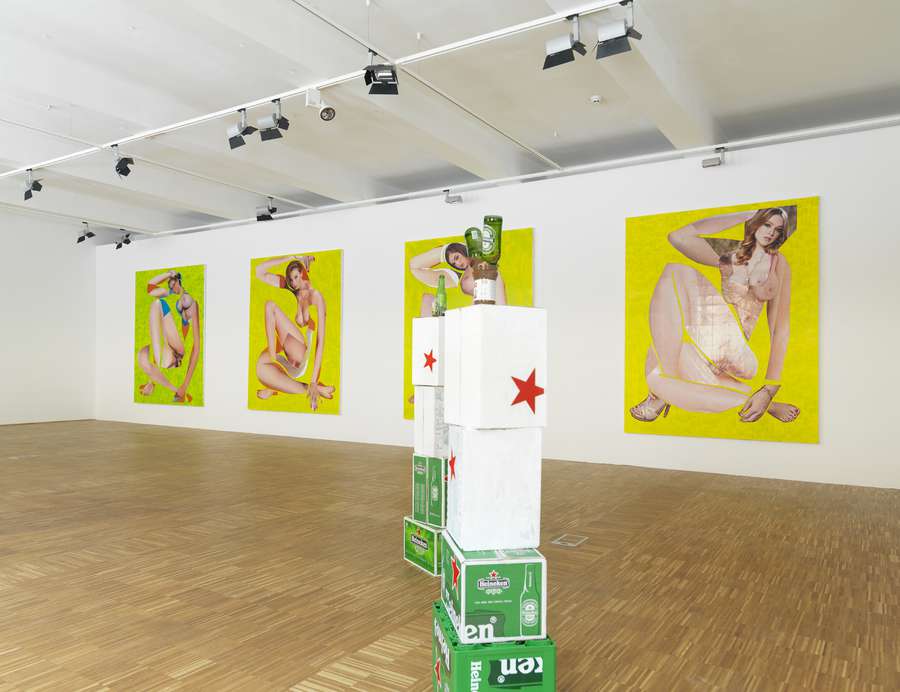 Freud, Marx and Self

The structure of Žiga Kariž’s works is complex and partly derives also from the tradition. With the latter the author establishes his own fine , embedded between personal memory and media image. In his latest series of paintings, he draws on Matisse’s nudes (Nu Bleu I–IV, 1952), a series of four representing a female body with intertwining legs and an arm stretching above her head.

The historical line of nude female representations for lustful male Kariž upgrades with a fourfold version of the nude, with images of four pornstars against green background. The author does not resort to in order to appropriate what has already been seen, but rather for setting a motif into a contemporary context, into the age of media and technology on the one hand and heterogeneity of Self and body on the other. He, too, creates nudes using the cut-out technique. He forms bodies by gluing together standard format (10 x15 cm) of photographs taken from the web. Thus, the solids are afforded a sense of , associated with the skin, while the act of gluing may be nostalgically reminiscent of childhood compilation of picture albums.

Apart from the abundantly explicit sexual connotation, the new paintings are marked by colour reduction. In the context of , the green background may be seen as a chroma key strategy, with which the colour can be replaced by a random picture during the composition process. In this way the artist establishes his own neutrality, while allowing the viewer to place the female actors a setting of their own desire. The relationship between the body parts and particularly between the genitals and the gaze in the concept allude to Žižek’s notion of . The latter refers to a situation in which the object assumes an active role, the role of Super Ego, thus becoming the one that truly enjoys the exhibition and its own , while the viewer is left with their value judgment, dependent on their selection of memories and images.

In counterpoint to the images of women, the exhibition also features a sculpture series composed of elements of culture. Psychoanalytical reading to which alludes the title of the project Freud, Marx and Self offers the key to understanding the symbolical sexual undertones—the male principle in erect, empty bottles of Heineken and the  in the remains of Nutella packaging.

Žiga Kariž: "Freud and Self, Alone" opening at the Nova Gorica City Gallery

The opening of "Freud and Self, Alone", an exhibition by Žiga Kariž – one of our most notable visual artists, will be held at the Nova Gorica City Gallery this Friday, 8 January, at 7.00 p.m. The exhibition is a collaboration between Aksioma – Institute for Contemoporary Art, the Museum and Galleries of Ljubljana and the Gallery of Fine Arts Slovenj Gradec.