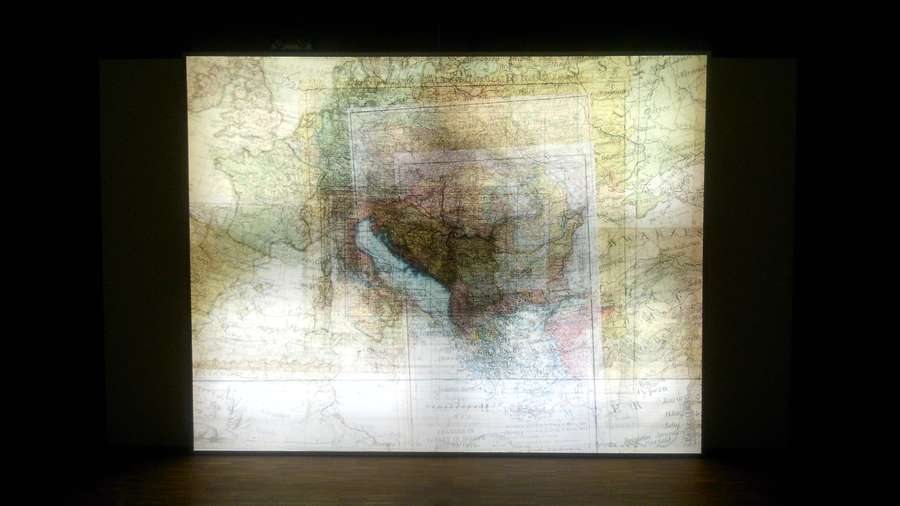 The exhibition project of the Bosnian artist in residence will focus and discuss the changes that affected Bosnia and Herzegovina's territory in the last millennium. Through the country border changes, the artist deals with questions of military power, school system and, last but not least, gender relations.

With the work produced during her residential stay, Lana Čmajčanin (Sarajevo, 1983) continues her creative practice at the crossroads of socio-political theme and gender problem. The project Blank Maps comprises two works: Geometry of place and 551.35 – Geometry of time. With the former, Lana Čmajčanin stages different historical geopolitical formations in the territory of Bosnia and Herzegovina from the Roman Empire to the Dayton Agreement in the form of political and military maps. It is a historical fact that setting and demarcating state borders belong in the domain of men. The only opportunity for mass participation of women is reflected in an indirect connection with borders, i.e. in the form of education. The artist takes advantage precisely of this field, rendering it a space of possible interventions into the construction of contemplating the past, and establishing it through the teaching aid – overhead projector. Its illuminating surface not only alludes to teaching as enlightenment of the mind, but uses its illuminating function to shed light on the lines of force that have led to the current state of affairs, i.e. Bosnia and Herzegovina as an artificial geopolitical formation. With their relational nature, transparencies represent an “open” work that allows us to actively interfere and shift maps, and thus redefine borders, constructing our own Bosnia and Herzegovina.

The latter work confronts the viewer with various delineations of Bosnia and Herzegovina from the 15th century onwards, in other words: since the incorporation of the Kingdom of Bosnia into the Ottoman Empire (1463), through its annexation to the Austro-Hungarian Monarchy, incorporation of its territory into the Kingdom of Yugoslavia, to its final deconstruction as a result of the Dayton Agreement. The attempts to understand the overlapping formations, which have throughout the history been defined by different external power structures (in the service of imperialistic forces), reveal conflicts, divisions and instabilities as its socio-political reality as well as the only constant and inseparable element of its history, and the state as such as something changeable, subordinate to the subjective wishes and appetites.

In her project "Blank Maps", Lana Čmajčanin draws on the fragmentariness and the state’s organic lack of cohesion. Drawing on the historical treasure trove and employing minimum means, she re-creates a document of time, enacted in a playful relationship between different connotations, in inventing new relations as well as possible interlacement of separate wholes, and especially in contemplating a more just social order.

The residence and exhibition of Lana Čmajčanin were organised in collaboration with SIZ Gallery, Rijeka.

Lana Čmajčanin (1983, Sarajevo), has graduated sculpture at the Academy of Fine Arts in Sarajevo and is a founding member of the Association for Art and Culture “Crvena”. She lives and works in Sarajevo. Lana works individually as well as collaboratively with mixed media, manly with sound, video, video performance and object art and has shown her works internationally on numerous shows and festivals.