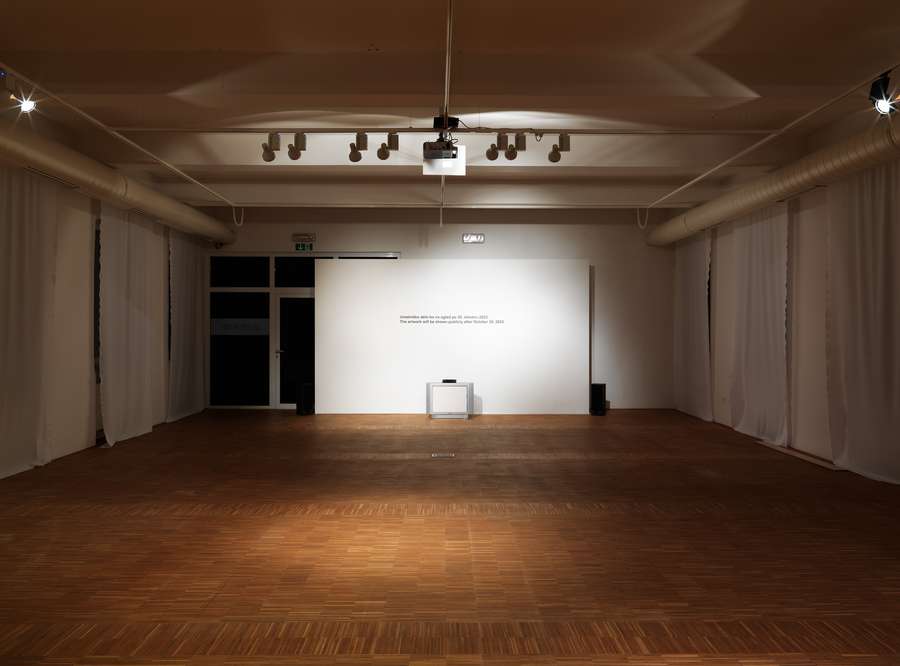 At a time when society is characterized by social and political indifference and the individual by the consumerism culture, which leads him to exhaustion and intellectual apathy, the Armenian artist Vahram Aghasyan once again researches the concepts of exhibition and artwork, and the role of a visitor in the establishment of the two.

The absence of an artwork in an exhibition space has always raised certain concerns, if not even disgust. So called “empty” exhibitions have appeared sporadically in the art history for the last 60 years. As each offers its own reading such projects remain actual.

When seeing the "Signs of Future" project, a visitor accustomed to hermetic and simple presentations which present artworks one after another in front of one’s eyes, is faced with the unknown, as the absence of an artwork represents a subversion of the established significance of the exhibition. Criticism of the absurd laws of the market, which assign an artist's product the status of a merchandised fetish and place it within the consumerist system, is therefore the first premise of the project. With the absence of an artwork at the exhibition, Vahram Aghasyan rejects the market and its laws, cancels its market value – as an artist is not a merchant – and by covering the name and title strips the exhibition of its presentational and representative nature. The second interesting characteristic of the project is that it modifies the visitor's existing experience with space. Upon entering the Tobačna 001 Cultural Center, individuals find themselves in a kind of a labyrinth through which they are led by the artist's instructions. What Aghasyan does is change the protocol of movement in space as he partially closes the regular entrance to the gallery and uses it merely as an exit; at the same time he also uses elevators to direct the flow of movement. The third characteristic of

"Signs of Future" is the elusive connection between the past, present, and future. In the present, the exhibition and the artwork exist only at the symbolic level; the deceptive now and here of the opening performance that Aghasyan records with his camera becomes a document of the past, while at the same time it forms material for a video that will be presented in ten years. Therefore, the action of coming to the opening and spending time at the exhibition space represents the content of the exhibition as an artwork, despite the fact that the artwork is eliminated from the exhibition and left to the flow of events at the opening. With the "Signs of Future" project Vahram Aghasyan expresses and presents himself as an artist whose artistic practice is connected to video and spatial placements, however, by toying with its (in)visibility, it can be connected to his photographic cycles as the process of the occurrence of images in photographs is also subject to the law of time – i.e. it occurs with a delay.