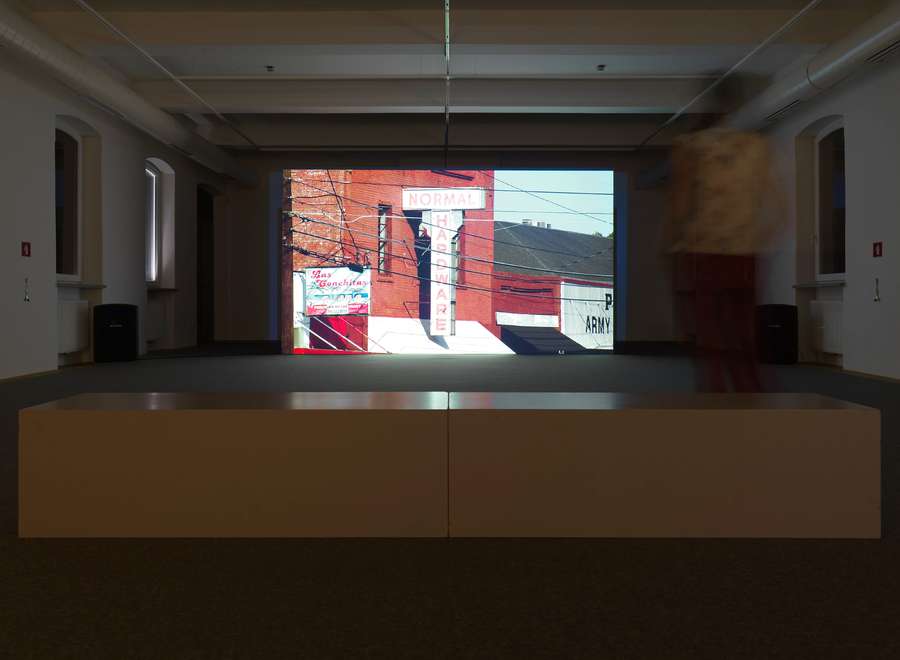 The creativity of Efrat Vital, which primarily refers to video, photography, and installation, reveals her fascination with oppositions triggered by co-positioning individual questions related to two different mediums. On one hand, such concerns researching elements of film narration such as the movement and rhythm of images, while on the other, it entails studying form and composition, i.e. elements connected to the field of fine arts.

In her video entitled "Normal Town" Efrat Vital focuses on an area of Athens – a town in the U.S. state of Georgia. The town quarter Normal Town was named after the female “Normal School” established in 1891, which replaced an older supplement college for confederate veterans. During World War II the complex of buildings was used by the American Navy, which in 1954 started using it as the site of the newly established Navy Supply Corps school, and was closed only last year. It was taken over by the University of Georgia and officer’s quarters, where the artist stayed during the making of this video, are now used as a visiting scholars housing. The first point of interest is that the impressions regarding the town are related by women, who thus, following several changes in the male and female principle in Normal Town, one again take primacy. The second point is that without exception they express their predilection for the time when there was a military school in the area. No matter whether these women embellished their recollections, saying that they did not feel the presence of the army as uniforms were rarely worn in the town, or denied its presence because it was allegedly not a real army, but merely a school for soldiers, the women interviewed, coming from the traditionally militant south, show the stereotypical attraction of women for men in uniforms. Is the reason for that the historical memory of the Civil War, which is so characteristic of many southern towns? Perhaps such memory was reinforced by 9/11?

Last but not least, it could be the result of many years of infiltration of the army into the everyday life of civilians, which has led to universal unawareness of its presence! From the formal perspective, the video is characterized by a sequencing of views which, except for minimal motion, almost photographically freezes the scenes. Sequencing individual shots allows the viewer enough time to follow the women's commentary, wrapped in the hissing of an urban environment. However, sound and picture do not create a synchronized image of Normal Town. To the viewer, the wording Military Family Housing Office, the Confederate flags, Winnie Davis memorial, an army store, etc., seem to be paradoxically inconsistent with the idealization communicated by the women. Efrat Vital understands the city as an independent motif and concurrently as a space which with the help of the historical remains in the form of inscriptions on monuments or symbols in shops, as well as the memories of the women enables a reconstruction of the various layers of life in an urban environment. Coming from militant Israel, with the Normal Town the artist continues her research on the history and present of a city, the role of the military and women in it, as well as the blurring of the boundaries between the public and private which she began in the Quiet Beach / Haifa Base video.