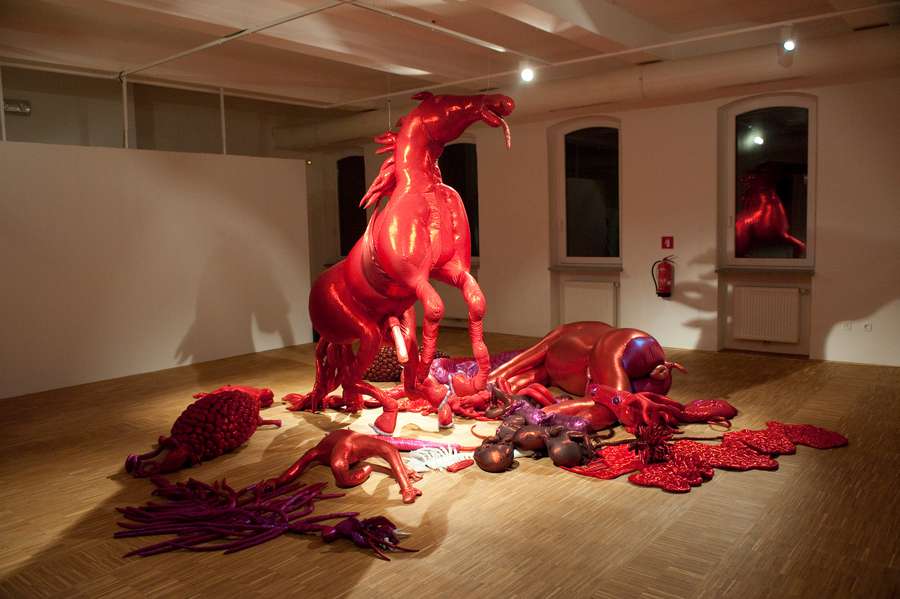 The residence programme of Cultural Centre Tobačna 001 will in cooperation with the City of Women host the artist who will at the 17th  International Festival of Contemporary Arts – City of Women perform in the spirit of this year's festival topic – Abracadabra.

Sodom and Gomorrah are names of Biblical towns on  the Dead Sea, which were destroyed by fire and brimstone because of the legendary wickedness of their inhabitants. What exactly their impenitent sins were is left up to guesswork; what is certain is that Sodom has given  rise to the word sodomy, denoting bestiality and homosexuality. Justyna Koeke structures her performances /installations like sculptures, making use of the tactility, pliability, and softness of textiles and the symbolic value of colours.

Often crossing the boundary between the real and surreal, her provocative and socially critical allegories speak  in a baroque language. The artist puts her protagonists in dynamic relations (often with sexual undertones), giving them exaggerated, artificial or even bizarre gestures, and uses a decorative, glitzy surfaces and a profusion of lush detail to tell her story of the downfall and decomposition of society.

In the centre of Koeke’s Sodom and Gomorrah there are women, children, and animals. The latter are Boschesque creatures, uniting features of  known animals and flame-like forms. Women appear like archetypal images of depravity, fetishism, and decadence, while the children, representatives of our future, are no more than doll-like manikins. Yet neither the animals, nor the women represent traditional demons inspiring fear in the viewer; on the  contrary, they appear funny, even amusing. It is their actions that make them demonic. The animating motive of Koeke’s poetic moving sculpture is the psychoanalysis of society, with the individual installations unveiling the dark sides of the human spirit. In them, we recognize images we have never seen, images that penetrate the crannies of the unconscious and awaken repressed thoughts, embodying our fears and desires.

The series of allegorical scenes unmask the errors embedded in the genes of human society and encoded in a basic cell of the individual. They underscore the corruptibility of power, pointing out the manifold forms of physical and emotional sadism/masochism the system of power dictates. In this system, violence  prevails, as it has throughout the history of humankind. There is always someone playing the role of the victim, and  another one that of the executioner; one, an exhibitionist, and another one, a voyeur. Biblical references to sexual perversions, sloth, bribery, greed, disregard for the needy and the poor… cannot be limited to the two towns mentioned above; rather, they determine the image of a world restlessly reflected through the prism of the city to focus on the crux of the problem, the individual responsible for his or her actions. And this is exactly what Koeke’s Sodom and Gomorrah is like: an epic of the modern-day city. Although we are not faced with the charred remains of the Biblical Sodom and Gomorrah, but with apparently innocent and amusing scenes of effervescent life, denying, in keeping with contemporary aesthetic theories, any distinction between the ugly and the beautiful, we cannot ignore the message that something is irreparably wrong with this world. And yet we accept it, perhaps due to the whiff of brimstone hovering about it.