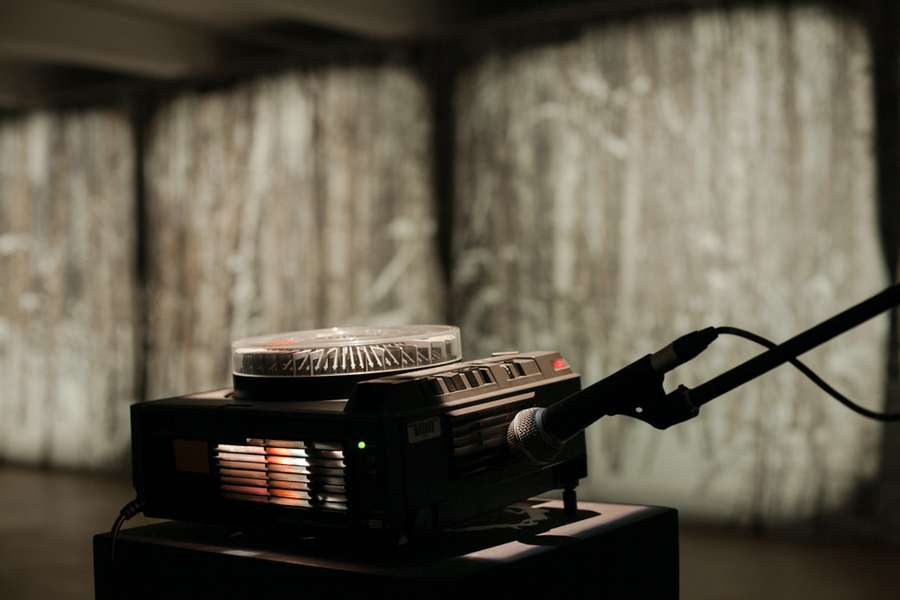 In his works, the Belgrade-based artist Vladimir Nikolić intertwines the questions concerning social and art systems with everyday situations and then, often in an exquisitely humorous way, combines everything into elaborate conceptual wholes.

He attracts international attention above all with his video pieces that are included in important private and public collections, and his works have been presented on many manifestations of contemporary art.

In a spatially complete installation, which he set up during his residency at the Cultural Centre Tobačna 001, the artist linked in a multifaceted way the key elements of his visual vocabulary to his investigations into the technical potentials of different media of contemporary art. An integral part of the installation in Ljubljana is a wall-to-wall blow up of a photograph whose flora partly alludes to a certain geographical location, even though in fact it contains nothing to reveal the identification of the place, state or object of investigation. Its abstractness therefore invites the viewers to ask themselves what is hiding in or behind the image. The latter, namely, features a section of the forest in the northern Swedish town of Luleå, where the biggest server farm or, more accurately, the data centre of internet giant Facebook outside the United States is located far from the public eye. Corporations strategically plan and seek most favourable solutions for every segment of their operations and the climate conditions – long and cold winters – make the northern part of the earth’s western hemisphere an ideal location for servers. This is because the latter require not only enormous amounts of electric supply but also constant space cooling, which giant fans, mounted into the architecture of such farms, perform by sucking air directly from the cold environment.

As could be expected, the artist failed to obtain a permit to visit the place and, pointed the camera towards the surrounding forest. By doing so, he found himself on the fringe of events, hence neither inside nor outside, but rather on the boundary between two worlds which, albeit interdependent, do not appear to affect one another. The presence of fans is imitated by multiplying the sounds of the fans of four slide projectors, which also serve as the basic light sources in the installation. Despite the empty clip magazines and by only lighting the photograph of the forest, the analogue medium utilized to display the reproductions therefore points to the fact that the displayed area today hosts one of the biggest “archives” of visual records in the world. And just as art has throughout centuries primarily served the interests of the ruling class, the new ruling elites are now represented by the “owners” of immeasurable quantities of visual data, collected in the servers of major global internet corporations.