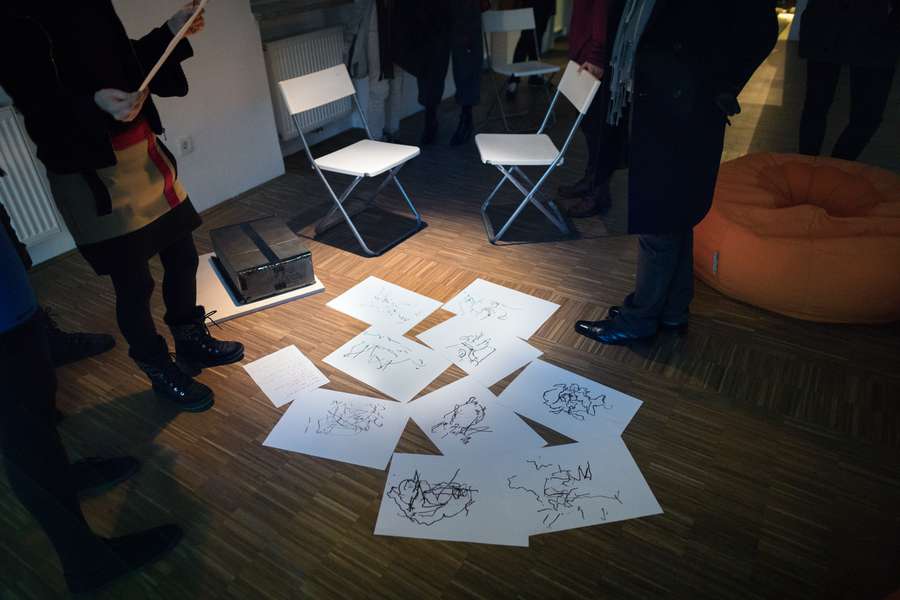 The work of the Bulgarian artist Kamen Stoyanov focuses on the questions of identity, migration, historical definitions and on topical issues regarding social and cultural development. Stoyanov always uses his own perspective, creating his works by gathering first-hand experiences of the social, artistic, cultural relations of the country he is researching at the time.

The creative practice of Bulgarian artist Kamen Stoyanov comprises video, performance, photography, installation, but also works on paper. The latter are either texts or drawings produced under specific physical or temporal limitations. Even though his actions usually take place in cultural institutions, public spaces or nature, the two underlying features of his works are inspiration by everyday processes and trivial objects, and movement. The former to a large extent represents a reaction or commentary to concrete political and social processes. Movement, on the other hand, is considered an intentional act which the artist generally uses it as a tool for interacting with the environment and for transforming spaces in which he finds himself.

The exhibition is a conglomerate of three projects showcasing his reflections on the possible ways of defining the in-visible, and in particular his tapping into the invisible through sensory experience, perception and intuition. On the opening of the show, Stoyanov will repeat his drawing performance Ask me a Question (2015/2016), allowing the visitor to ask him a question which he will answer with a rapid, one-minute sketch drawn on a piece of paper. The verbal form of communication will thus be replaced with the visual one, however, without a chance to witness the making of the drawing, which will unfold hidden from view, with the artist’s hand, pencil and paper in a box. The second work is the video footage of a performance that Stoyanov recently did in collaboration with Lithuanian artist Ieva Savickaité in Vienna, as a part of the project Silence matters. In it, Savickaité, wearing a blindfold, is trying to find seventeen marbles scattered on the floor, while the camera, mounted on her finger, records the movement across the room. Stoyanov circles every unfound marble and puts it back into a slit. In this way, he creates a group of points which he finally connects by drawing a line between them and names the resultant figure A Fish Eating a Pyramid. Even though in both performances the author does not get to see the drawings he or she is creating and the resulting lines, grids, and figures might be classified as experimental or interpreted as mental imagery, the first performance deals with the problem of contemporary art production and the second one highlights coincidence as the main element of change. The principal work featured in the exhibit is an essayistic film in which the artist – this time by juxtaposing the human eye with camera eye – confronts the various levels of the in-visible again in his meeting the Invisible City guide in Ljubljana, trip to Šempas and conversation with Marko Pogačnik.

The artist-in-residence centre of the CC Tobačna 001 is currently hosting the Bulgarian artist Kamen Stoyanov, whose work focuses on the questions of identity, migrations, historical definitions, and on topical issues regarding social and cultural development. He often uses public space and architectural background for the setting and execution of his works.