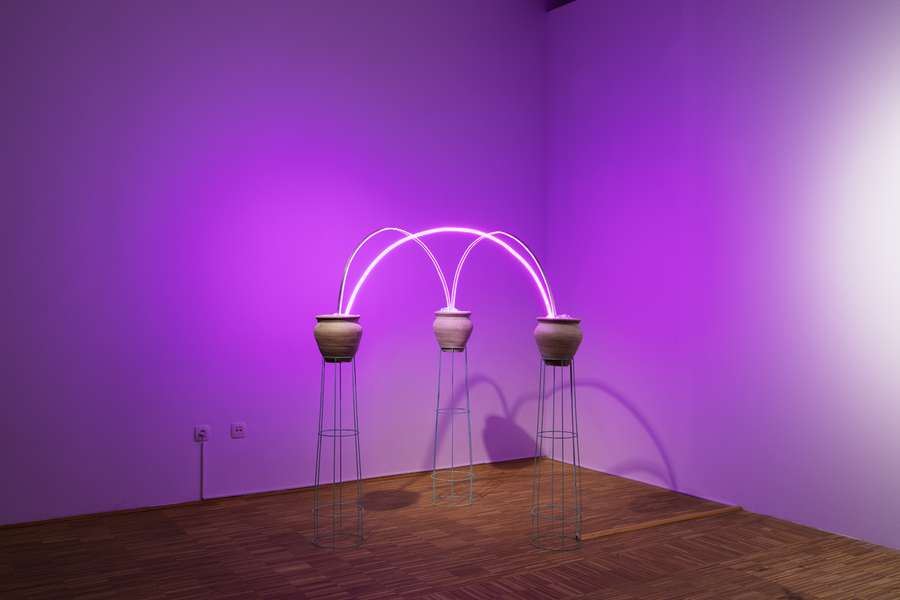 Rona Stern, Those who cannot remember the past, 2018 © Andrej Peunik/MGML

Those who cannot remember the past are destined to repeat it

Her constructions are inspired by images found on the streets, roadside billboards and the Internet, and are composed out of ready-made objects or cheap trinkets. In terms of style, the artist leans towards the critique of aestheticised daily life and, through it, the problematisation of consumer society as well as the individual’s role in it. To this end, she either transforms original elements, objects and images from daily life, or isolates them and then arranges them so that they ordinarily resemble display windows, monuments and altars of modern civilization.

The tripartite exhibit, which was produced on the completion of her residency in Ljubljana, consists of wall objects, a spatial installation and a video. The wall objects are designed by reducing visual data according to a strict construction model that incorporates a changing ratio between the wire netting and visual images mounted on it on the one hand, and by introducing watercolour tonal values on the other. The artist uses the wire netting as a computer matrix, a virtual field within which any construction can be formed and just about anything can be imagined. Into this matrix, the artist places figures made out of laminate sheets that signal her commitment to the aestheticism of geometrical abstraction while concretely alluding to Socialist Classical reliefs typical of community canteens in kibbutz settlements. The spatial installation is a unique still life of amphorae and neon lights. Ceramic containers are among the most common archaeological finds. Time and again, they help us to interpret history; however, when used as replicas of replicas by the artist, they serve as perfect artefacts for transformation. The video shows one of Tel Aviv’s most neglected streets, occupied by refugees, leading down to the central bus station. There, Stern turns her camera on the façade of the supermarket Supercheap, adorned with a tacky landscape photo and lit by randomly flickering light bulbs.

With her ironic deconstruction of visual reality, Rona Stern aims to draw attention to covert interests pervading the public sphere. She does so by reflecting language similar to that of consumer politics, i.e. by transforming objects or concealing the material out of which they are made. In this way, she creates objects of deceptive attractiveness as well as dynamic and playful setups that nevertheless exude discomfort and uncertainty.