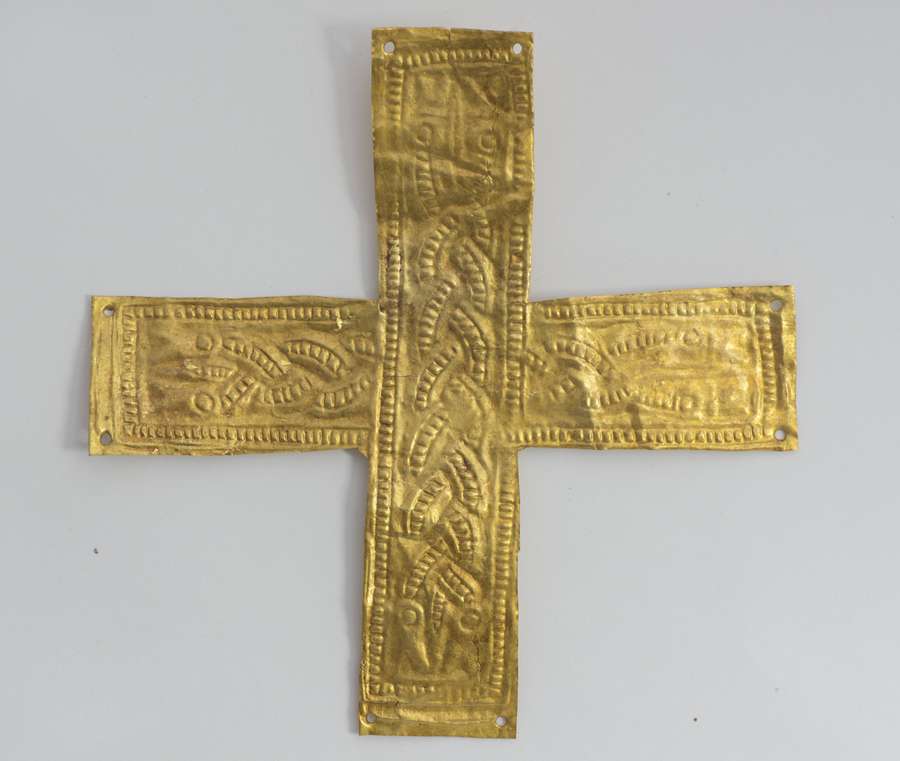 Aurea crux. sporočilo za medije (.doc)
Share:
From the Treasury of the City Museum of Ljubljana

AUREA CRUX. The sacred and myth in Langobard gold

The six Lombard crosses on exhibition, made of thin gold sheet, are presented to the public for the first time following the excavation of a large burial site in 2012 and restoration under the aegis of the National Archaeological Museum of Cividale del Friuli. Cividale was in fact the capital of the first of the thirty-five duchies established by the Lombards throughout the Italian peninsula, in this way laying the foundations for one of the most important chapters of European history.

Gold crosses, which are not known in the Langobard funerary tradition in Pannonia, appear as part of the grave goods of members of the medium-wealthy classes of the first generation living in Italy (the last decades of the sixth century), with no distinction of sex or age. Originally sewn onto the funeral veil that covered the face of the deceased at the moment of burial, these articles are linked to the complex period of the Christianisation of the Lombards. They had an apotropaic function connected to the hope of redemption and protection against evil, while at the same time they were an important symbol of social prestige, in that they were only placed in the graves of eminent individuals.

THE LOMBARDS: MIGRATION OF A PEOPLE IN BARBARIAN EUROPE

The long journey of the Langobards began in Scandinavia and ended in Italy, where they arrived in AD 568 after five centuries of migrations.

Having initially occupied territories on the Baltic, they then settled in the area of the Elbe. At the end of the fourth century, under pressure from the Huns, they moved into Bohemia and Lower Austria and established a kingdom in the Danube basin, beginning a policy of alliances with the Thuringians, the Gepids, the Avars, the Byzantine Empire and the kingdom of the Franks.

In the mid-sixth century the Lombard kingdom consisted of vast territories between Bohemia and Hungary (Pannonia, a province of the Roman Empire), including a considerable part of present-day Slovenia. When the increasing power of the Avars led to new pressure, the Langobard king Alboin abandoned the Danube area and set about conquering Italy. His forces included contingents of Slavs and inhabitants of the steppes who were pressing on the borders of the Byzantine Empire from the east.