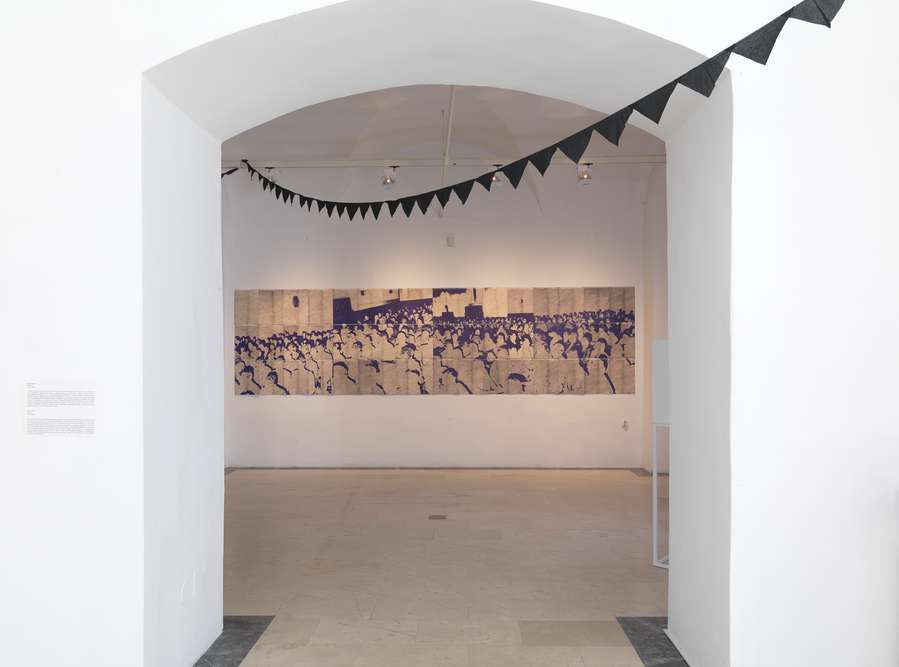 Minerva Press Photo Archive contains more than 30,000 photographs taken between 1960 and 1990 within the common photographic lab of the two daily newspapers of Cluj, the Romanian speaking – Făclia (The Torch) and the Hungarian – Igazság (The Truth). The archive was saved from the trash by the former editor of Igazság, Tibori Szabó Zoltán and has been kept ever since in the collection of Minerva Cultural Association in Cluj. The association currently owns the Hungarian daily from Cluj, Szabadság (Freedom), a newspaper founded on the basis of the previous editorial enterprise. The archival fond has been rediscovered by the artist Dénes Miklósi in 2013 and it has been published in various forms since then. These include workshops and exhibitions initiated by Dénes Miklósi, Răzvan Anton and Szilárd Miklós, together with their guests.

Alongside individual positions and personal interpretations, this collective effort was aimed at generating debates in the public sphere on the topic of public archives in Romania. This is in turn connected to the public memory of previous regimes from the former Eastern Bloc, heavily marked by privatizations and the willful forgetting from the subsequent transition period. Beside intentions to emancipate the medium of photography and develop the archive as a possible tool for the future, a sound objective from the beginning was to develop and establish a fully digitized archive that could be available to various research interests. The photographic fond containing medium format black and white negatives was very similar to a black box that needed first to be made visible through the process of digitising and then turned into a usable archive that would allow viewers to navigate its contents. This project was coordinated by visual artists and was supported, financially and logistically by nonprofit organizations.

The "Double Part Time" exhibition brings together various positions regarding the archive, both collective and individual. Apart from the artworks themselves we have included artefacts that have resulted from the long-lasting initiative by which the public, mostly retired workers from the now defunct factories of Cluj, was invited to take into possession the pictures that featured them.

The photographs shown by Dénes Miklósi are covered by a layer of memories. They were overwritten on the request of the artist, thus resulted in images where there is a contrast between the memory of the workplace and the photographic document.

In the video reportage made by Tibor Schneider for TVR (Romanian Television), we see the artists attending a meeting of the former workers of Unirea factory, inviting them to get involved in the archiving process of Minerva. This action was part of a month-long campaign of newspaper inserts published in the pages of Szabadság.

The monochrome textile collage of Iulia Toma is a mural image that works as an analogy to the fragmented social tissue. The triangular corners resulting from the cutting of the black textile have been displayed in previous exhibitions similar to festive flags hanging from the ceiling. This gesture reenacts the celebratory ambience of the factory workshops full with mobilizing slogans in the form of a dystopian after party backdrop.

The drawings of Cornel Rus were made 30 years after the closing of the factory where he had worked his whole life. The machines had been sold a long time ago as scrap iron, when he decided to bring them back from memory in the form of technical drawings. These memories are like open wounds in his psyche and offer another analogy to the archive.

The video made by Szilárd Miklós in collaboration with the composer Csanád Kedves reflects upon the centralized economy. The editing table that illuminates the photo negatives is also an architectural model and serves both as a tool of production and interpretation of history. This tool projects and scans the scene simultaneously with a resolution that brings into sharpness the macro and micro views of the scene, but it is unable to account for the irregularities of the plastic figures, which give the scene its sense of proportion.

The video-wall of Claudiu Cobilanschi claims the legacy of Cinecronica department from the former Documentary Film Studio "Alexandru Sahia", Bucharest. His work reenacts the specific point of view of reportage in the recordings he makes on black and white film of apparently unimportant daily events. These can serve as possible social metaphors reserved for the future.

The recent practice of Răzvan Anton is based on a transfer from the photographic developing process to drawing. His works are made through processes using office tools, like a ball pen to create a photographic emulsion, which is in turn exposed to the sun. The long-term developing process outweighs the work that would take place in the editorial office, while it reveals the pictures from the archive as the weared down material surface of history.

The documentary film of István Fischer was shot in a machine factory in Cluj. In his film, Fischer records the layering of generations already present in 1970. Fischer himself was forced to work in this factory a few years before, and went back there to realise his film. He is using the subject of the factory as an analogy to the medium of film, by referencing the first footage of the Lumière brothers, in which workers pour out through the factory gates at the end of their shift. For Fischer, film is a reversed opportunity to make these uniquely intimate portraits. Without these personal testimonies, their struggle with the dead matter of the factory would seem pointless.

The electronic music composition made by Bálint Bolcsó, is a sound fabric that is interpreting and transposing the mass of information from the totality of the pictures of Minerva.