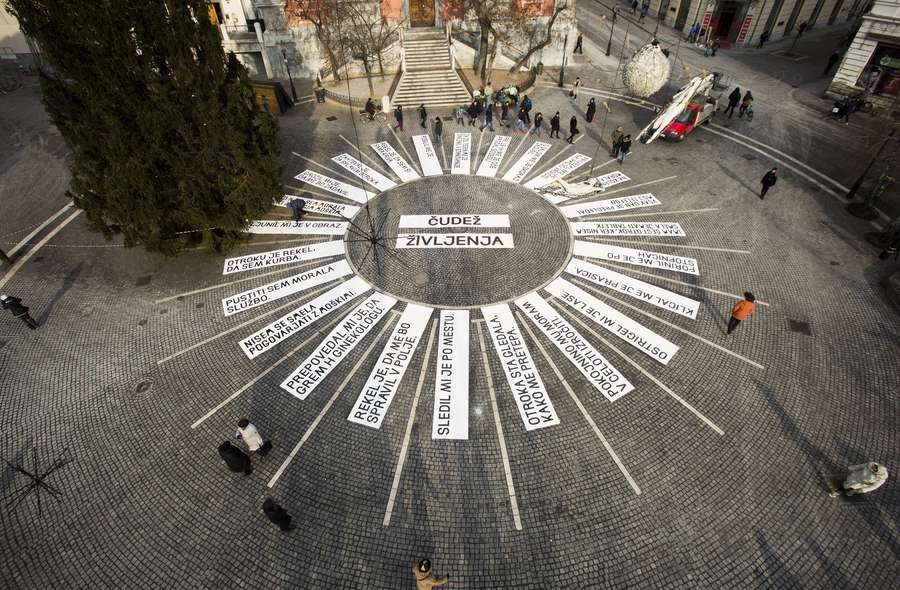 Milijana Babić, It's Her Own Fault, 2017 © Matevž Paternoster/MGML

It's Her Own Fault

The Rijeka-based artist Milijana Babić focuses on a number of studies and findings regarding the rights of the weakest and most vulnerable social groups, such as the elderly, unemployed or women. In most cases, the data shed light on the violations of human rights, as well as social norms and standards we prefer to ignore or, rather, facts we too often turn a blind eye to. During her artist residency in Ljubljana, Babić focused on the institutional role that the Roman Catholic Church plays in relation to the question of women’s rights to self-determination.

The artist not only collects and processes information, but also tries to provide different interpretations of the studied subject matter or obtained data within the context of the artistic milieu and her own position in society.

For example, she investigates the violations of human rights by turning into a job seeker for a year and a half, looking for work through newspaper want-ads and experiencing first-hand the evils of the employment policies that are eroding on labour and ultimately human rights. Or she works as a self-employed professional in culture, scrutinising the role of a self-employed female cultural worker in contemporary society. However, themes and reactions that feature most prominently in her work are associated with gender politics, gender discrimination and violence against women. Now that the acquired human rights, set out in the constitutions of all European states as the guiding principles and laws of democratic society, are becoming subject to polemics, we must urgently resist different institutions in their surreptitious attempts to impose their opinions on the basic issues concerning the female body. Humiliation, marginalisation and inequality of any human being are threats we must stand up against engaging all social mechanisms, be it national statutory provisions, civic initiatives or religious dogmas.

During her artist residency in Ljubljana, Babić focused on the institutional role that the Roman Catholic Church plays in relation to the question of women’s rights to self-determination. As in her work she tends to borrow the language of the institution she is critical of, she intervened in spaces for congregation and prayer with a text and iconography that are familiar to churchgoers. She covered the bulletin boards of fourteen churches around Ljubljana with a prayer to Virgin Mary, asking her intercession for God to protect the rights of women, particularly those that are under threat of humiliation, exploitation, punishment, trafficking, rape, and the less fortunate ones that were unable to escape these evils. The second work is the artist’s response to the use of public space for the purpose of disseminating one-sided propaganda we have witnessed recently, since public space as the basic environment for the promotion of pluralism cannot and must not serve the partial interests of any given institution.

Special thanks to Association for Nonviolent Communication for help with the realisation of public space intervention in the Prešeren Square.

"With a prayer for women’s rights”

"Milijana Babić from Rijeka is an artist whose works are based on the performance art practice. During her stay at the CC Tobačna 001 residential centre, she researched the role of the Roman Catholic Church institution and its connections with a woman’s right to choose. Her works are always based on researches regarding the rights of the most vulnerable groups in our society – in 2013, for example, her work at City of Women revolved around unemployment – she quickly found suitable context for her art practice in Ljubljana. As a woman and mother, the artist could not overlook the attacks on women’s rights, which have become a daily occurrence. The project "It’s Her Own Fault" was thus born."

The CC Tobačna Artist-in-residence centre will soon host the Rijeka based artist Milijana Babić. Her recent work is mainly rooted in performative art practice, often developing in direction of contextually specific long term actions in public space. Starting point of her work is her own position as a woman and an artist which she questions in her immediate surroundings. 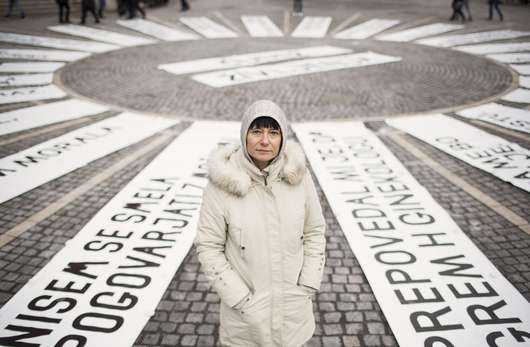 Tue
Jan 2017
Guided tour, Lecture
5 p.m.–6 p.m.
Cultural Centre Tobačna 001
Guided tour of the "It’s Her Own Fault" exhibition and a conversation with the artist
You are cordially invited to join us on a guided tour of "It’s Her Own Fault ".The guided tour of the exhibition will be followed by a conversation with Milijana Babić, an artist from Rijeka who focuses in her woks on results from various researches connected with the more vulnerable social groups - such as the elderly, the unemployed and women. The conversation will be moderated by the curator of the exhibition, Alenka Gregorič. &nbsp; 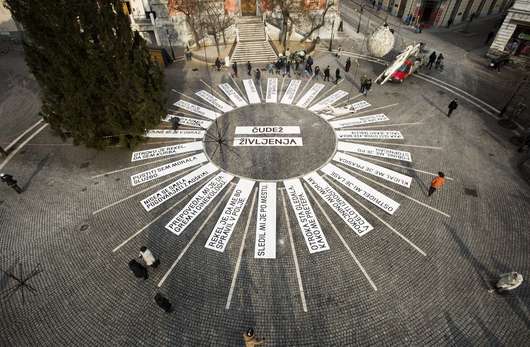 Thu
Dec 2016
Lecture, Talk
7 p.m.–8 p.m.
Cultural Centre Tobačna 001
Artist Talk: Milijana Babić
We cordially invite you to join us at the conversation with the visual artist Milijana Babić. She is the current guest of our artist-in-residence centre and her solo exhibition will come in January 2017. The conversation with the Rijeka-based artist will be held in the context of Open Studios and will be moderated by Alenka Gregorič, the art director of the CC Tobačna 001.
All events - Cultural Centre Tobačna 001 • All events - MGML