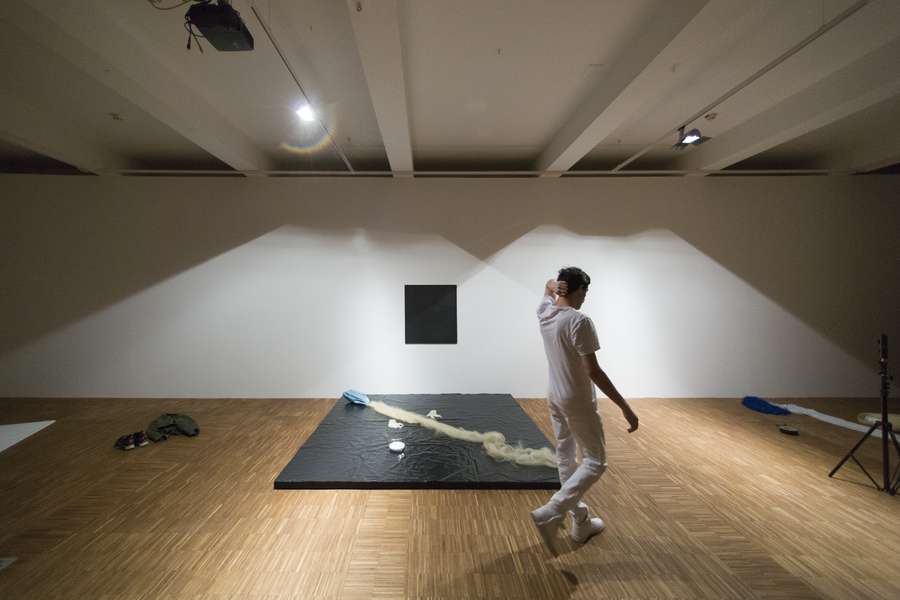 The CC Tobačna 001 artist-in-residence centre is hosting multidisciplinary artist Astrit Ismaili (Priština, 1991). Auto poetic performance Unique consists of three fragments of temporal realities which Ismaili accompanies with three songs and it reaches beyond the dichotomy of gender—subversion takes place through the formation of identities that transcend the existing, purportedly congruous categories of gender, sexuality and desire.

Already Simone de Beauvoir asserted that one is not born, but rather becomes, a woman. Every society develops its own concept of femininity and masculinity. On this basis it then develops a media-driven system to constantly remind us of what it means to be a woman or what it means to be a man. Those who conform to this normative model can lead a joyful life whereas those who resist it face discrimination and ridicule.

The performative practice of Astrit Ismaili (1991, Pristina), which is largely based on his intimate experience, addresses themes such as family, gender, sexuality and identity. In doing so, he draws on queer theory, which stems from the question as to how there may only be two genders and/or two types of sexuality, given that gender and sexuality are constructed socio-political rather than natural categories. As a consequence, people cannot be fit into strict identity categories—there is no man, no woman, no gay, no lesbian and no straight. Postmodern identities are chiefly marked by fluidity, a kind of gender hybridity. Auto poetic performance Unique consists of three fragments of temporal realities which Ismaili accompanies with three songs. These are inspired by Albanian polyphonic music and are performed live in A cappella style and with the use of a vocal processor. On three separate stages the artist presents three different fictive images, three alter egos. The Pregnant Boy is afraid of the coming changes and the loss of her freedom. She is afflicted by mood swings, hypersensitivity and proneness to overreaction. The Nymph is a singular mixture of the Greek mythological goddess of nature, a long-haired Albanian forest fairy and a nymphomaniac who has succumbed to the father complex. Her long hair and nails (refer to the myth that they grow even after death) allude to eternity and are in contrast to the nymph’s mortality. The third alter ego, wearing a military uniform over bare skin and going by the name Seahorse Boy, is a good-willed soldier scratching his body with a knife blade while having tea. Exposing absurdity in the relationship between the threatening knife blade and the gentleness of his physique, he dares us to find a discrepancy between appearance and reality.

Ismaili’s performance reaches beyond the dichotomy of gender—subversion takes place through the formation of identities that transcend the existing, purportedly congruous categories of gender, sexuality and desire. They are characterised above all by multitudinous emotions. These are fluid identities that include the remnants of identities, marginalised individuals and outcasts. They got caught in the action of freeing themselves from the feelings of nostalgia, melancholy and negativity while evaporating sounds that Astrit Ismaili likes to call healing pop music.

Special thanks to Leja Jurišić and Ana Čigon for contributing to the project.

The residency and project of Astrit Ismaili were executed in cooperation with Stacion, Pristina.

Astrit Ismaili: “The body is always present in my work”

Until 29 January, the CC Tobačna 001 is hosting the exhibition UNIQUE, which opened with a performance act of the Kosovar artist Astrit Ismaili. The artist also gave a statement for Osmi dan (RTV Slovenia): “I started as a visual artist, my background is actually theatre directing. My interests flow in different fields, different focuses, but what is always present in my work is the body. The body in its relation to space, to society, the body as the human body, the impossible body, all these different aspects of the body…”

The CC Tobačna 001 artist-in-residence centre is hosting Astrit Ismaili (Priština, 1991), a multidisciplinary artist working with performance. He performs form intimate experiences that operate on themes as family, gender issues, perception and transformation. His work connects to ritualistic and transgressive body performances that violate social taboos by allowing an experience of personal transformation during the event.