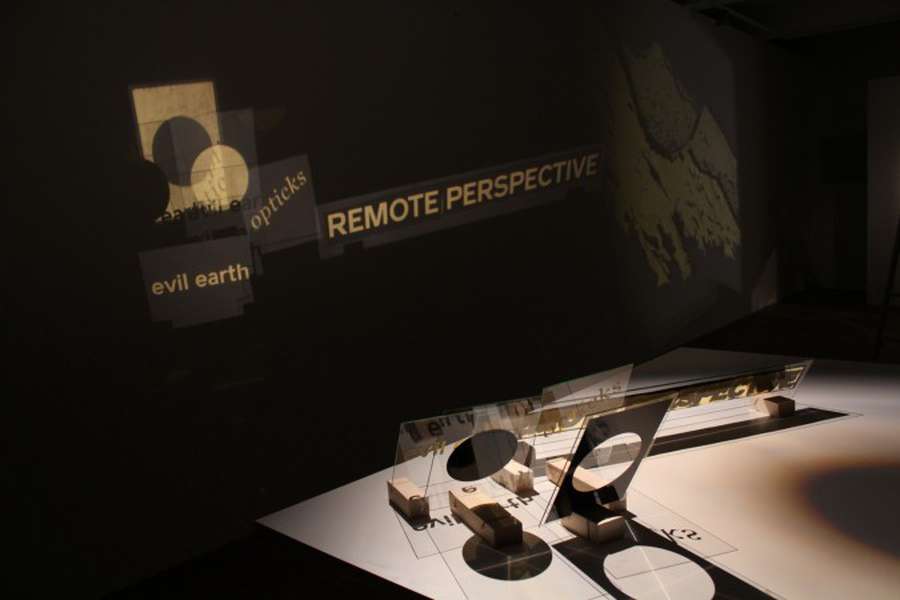 In the residential centre CC Tobačna 001 we are hosting Lala Raščić, born in Sarajevo in 1977 and now living and working in Zagreb, Sarajevo and New Orleans. With the project Evil Earth, in which the visual and narrative forms intersect, she explores the human view of Earth under the new conditions of visuality. During her residential stay, Raščić created a complex autopoetic setting in the exhibition space, composed of heterogeneous elements: video, object and typographical works that form parts of a modular project and present a fragment of her research.

Before the Anthropocene (the term designates the latest geological epoch that began when human activities started to have a global impact on Earth’s ecosystems), the conventional view was based on linear perspective. The latter established an imaginary stable viewer and a horizon. Our view, however, is becoming increasingly vertical. In many regards, it imitates the concept of a universal God’s-eye view. Given the development of technologically advanced media that convey distant scenes and turn the world into an uncontrollable flurry of images, it appears as if the view of a telescope, a camera lens or a satellite has expanded to the point of being omnipresent. The view, as reflected in the present moment, is no longer uniform; it is becoming dispersed, indirect and unstable, ultimately turning humans from unique and unrepeatable subjects into objects—conglomerates of data, mediated through various media in an electronically controlled world. This view Raščić defines as “remote perspective”, a perspective without a subject-viewer, a perspective of displaced optics.

During her residential stay, Raščić created a complex autopoetic setting in the exhibition space, composed of heterogeneous elements: video, object and typographical works that form parts of a modular project and present a fragment of her research. The glass object consists of multiple layers on which she painted an idealized mountainous landscape in the technique of verre eglomise (gold leaf on glass). While lyrical reading depicting the mountains in the Julian Alps overlooking Mt. Triglav brings up associations with the legend of the Goldhorn, the artist resorts to using the motif because the mountains obstruct the horizon and destabilise the view. The multilayer glass object points to the stratification of metadata, while simultaneously creating an image overlay and consequently distorting the original image. The perspective play is enhanced by the reflections of words on the walls of the exhibition space that further disperse the view. These are key words that represent phases of her contemplation and research of optics without the subject and perceptual twist caused by the “remote perspective”, the consumer deployment of drones and selfie sticks, for example.

Through Earth’s geography, transposed into abstract values, Lala Raščić thematises the instability of vision as a consequence of the growing importance of vertical (remote) perspective as well as a result of mass production of images. Such development leads to the transformation of our cognitive abilities to Google-like automatisation of thinking processes.

The CC Tobačna 001 artist-in-residence centre is hosting Lala Raščić, who now lives and works in Zagreb, Sarajevo and New Orleans. She finished her studies at the Academy of Fine Arts in Zagreb and obtained her Master’s degree from Rijekademie van Belledende Kunsten, Amsterdam. Her works, which ideologically inhabit the narrative gap between concept and theatricality, are created through videos, artefacts, installations and drawings. She attended artist-in-residence programs at the Rijksakademie (Amsterdam) Platform Garanti (Istanbul), Forum Stadpark (Graz), KulturKontakt (Vienna) and Cite des Arts (Paris). Raščić is the recipient of the awards Future of Europe (Leipzig, 2013), T-HT and MSU (Zagreb, 2007), and The Young Visual Artist Award – Zvono for Bosnia and Herzegovina (2006). ovina, 2006).