In the beginning of March, the ZRC SAZU Institute held the 10th Grošelj Symposium, which brings Antiquity and Humanistic Studies closer to contemporary audiences. Bernarda Županek, our curator for Antiquity, and Alenka Miškec, her colleague from the National Museum of Slovenia, held an interesting presentation of a Roman gemstone with an engraved ship at the symposium. 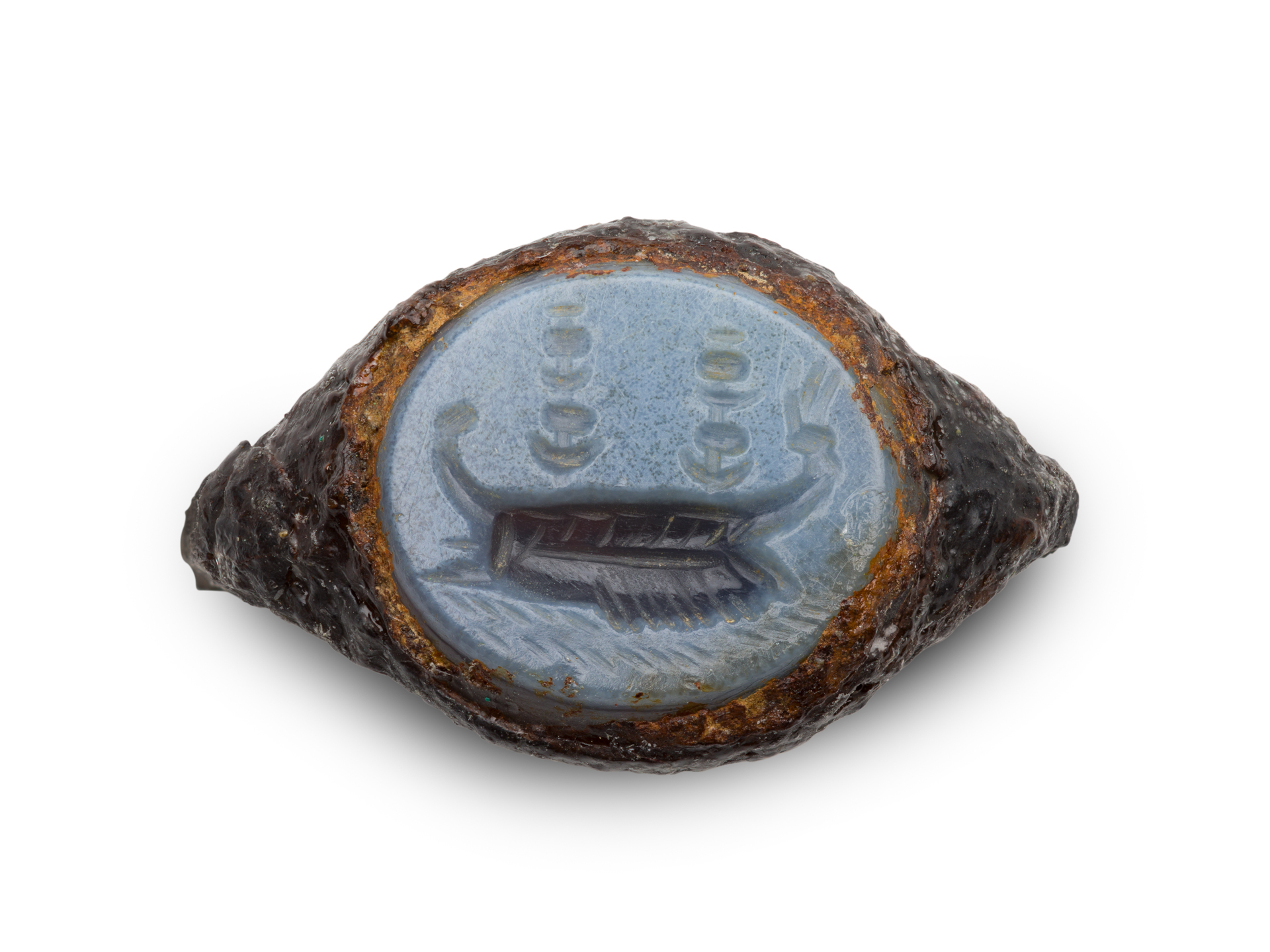 Roman ring, discovered in 2015 at Slovenska Road, with an engraved gemstone depicting a ship © Andrej Peunik/MGML

Judging by its manufacture the ring is from the 1st century, while the gemstone, according to its style, dates to the 1st or 2nd century CE. The gemstone was made from nicolo, a type of chalcedony with a blue surface and a brown interior, which creates a contrast with the engraved motif. The engraving is interesting on itself; it depicts a transport vessel, a ship. Not the usual merchant ship that would transport goods, as the ship is actually a war galley.The oars, stern, the bow of the ship, and the rostrum can all be clearly seen. On and above the ship are the images of signa militaria, the military standards of two centuriae.

Županek mentioned, “In our Grošelj Days contribution, we sought for the inspiration for this motif, especially on coins. The closest comparisons can be found on a series of coins dedicated to Marcus Antonius, which were minted in large quantities between 31–30 BCE, before the naval battle of Actium. These coins were most likely minted to be payment to the soldiers participating in the battle. On the obverse side of these so-called Antonius’ legion denarii was an image of a galley with the legend corresponding to Antonius’ position of augur and triumvir. The legends on the reverse corresponded to various military units, with three military insignia: two of them representing centuriae, as on our gemstone, and one eagle (aquila), which was the legion’s standard. Supposedly, the author of the gemstone was inspired by these coins, or a similar series, when coming up with a motif. Our gemstone’s version is exceptional as naval motifs are rare in Roman glyptic art, especially considering how important civilian and military navigation was for the Roman state. We found several similar gemstones, of which the closest to ours is the one held by the British Museum in London.”

Otherwise, Romans did not wear a lot of jewellery, and rings were one of rare jewellery pieces worn by Roman men. Their usage was defined by law, which means that, for example, during the Republic, iron rings could only be worn by free Roman citizens, while gold rings had all sorts of limitations imposed on them during the time of Justinian. Gemstone engravings reflected the taste and identity of their owner, who would use his ring to seal documents, contracts, letters, and thus publicly show the symbol worn on his finger. Who was the man that wore this ring with a galley and symbol of Emona? An ex-soldier, proud of his glorious past? Or was he perhaps a citizen of Emona, proud of his Roman heritage and maybe even of Augustus’ victory at Actium, which had since become legendary, as it was a battle in which the Roman Empire was born and began the two-hundred period of Pax Romana.

This year’s Grošelj Days were otherwise focused on the topic of tourism in Antiquity.