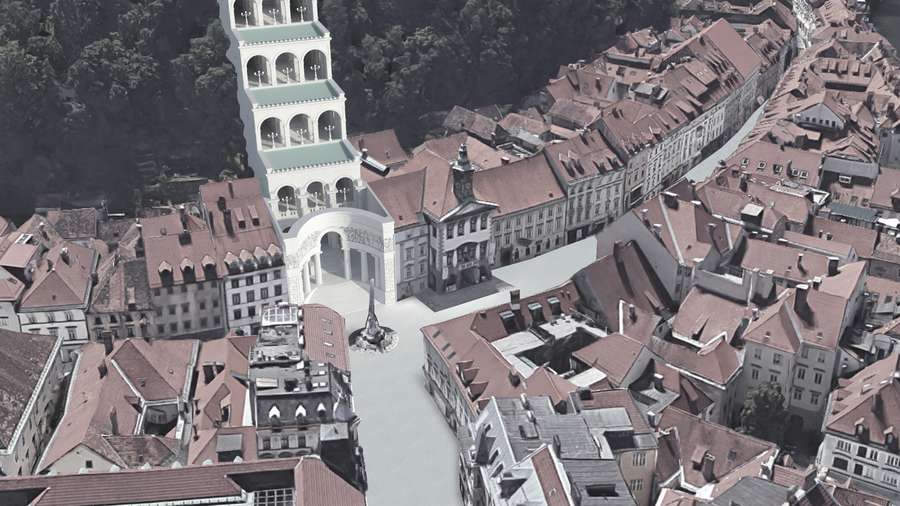 The exhibition will unveil how would the city look if Plečnik was able to realise four major metropolitan projects for Ljubljana: New Town Hall, Butchers’ Bridge, monumental octagon with an impressive tower on the Castle Hill and Cathedral of Freedom in Tivoli Park.

The exhibition presents a selection of four metropolitan projects that would forever change the image of today’s Slovenian capital: the New Town Hall on the Vodnik Square that would flirt with the Central Market, which would in turn be connected to the Petkovšek Embankment via the Butchers’ Bridge. The Ljubljana Castle would be transformed into a monumental octagon with an impressive tower, with access to the Castle Hill in the form of an awe-inspiring stairway next to the city’s current Town Hall. The city and state would boast the iconic Cathedral of Freedom in Tivoli Park, an original conical design for the Slovenian parliament, placed onto a block.

With the end of World War I, Ljubljana needed new administrative buildings and orderly public spaces as it became a regional centre. Plečnik’s project for the construction of the Central Market with the Butchers’ Bridge and the New Town Hall had, while being a very intricate and expensive project, the full support of the city authorities. Sadly, it came to a stop with World War II, which resulted in only a partial completion of the Central Market in April 1942, while the construction of the Butchers’ Bridge and the New Town Hall never even commenced.

In his plans, Plečnik always saw the Ljubljana Castle as the dominant point of the city. The castle, owned by the City of Ljubljana since 1905, was to be presented as the city’s crown. The importance of the castle complex as a picturesque background to Ljubljana’s cityscape was evident with two projects for its renovation. The first plan for the castle from 1931‒32, named the Slovenian Acropolis, only envisioned for a height increase of some of the building’s parts alongside a greater harmonisation and unity of style. Following Plečnik’s proposal, the building would be intended for cultural activities, with a museum and a gallery. However, in his 1947 proposal Plečnik presented a completely new – a monumental octagonal building, which unveils his ideal image of the castle. In the second project, the former castle edifice would be completely demolished. The first project was never realised due to the economic crisis, while the second project never gathered enough political goodwill, as the new state wanted a museum dedicated to the National Liberation War at the castle.

With meagre financial means at his disposal, Plečnik was only able to realise a few picturesque pathways around the Castle Hill. All other proposals to connect the castle with the city, including a monumental covered stairway next to the Town Hall, remained unrealised.

The architect wanted to connect the city organism into a whole by opening new perspectives, a combination of street axes, and the creation of charming vantage points and parks. He wanted to arrange a monumental central square and proposed a number of new solutions for select locations. Each task was an opportunity to emphasise existing solutions and to create connections with new city motifs. Professor Plečnik worked on and perfected his plans for various projects to the end of his life. Thus he eventually still managed to create comprehensive urban solutions in Ljubljana and, following the example of classical Athens, transform the city into a modern national capital.

Plečnik’s unrealised projects for this exhibition were recreated with 3D technologies: 3D modelling, visualisation and 3D print. This was a collaboration with the architect Nejc Bernik from the France Stele Institute of Art History ZRC SAZU and masters’ graduate Anja Škerjanc with mentor prof. dr. Deja Muck from the Chair of Information and Graphic Arts Technology at the Department of Textiles, Graphic Arts and Design, Faculty of Natural Sciences and Engineering in Ljubljana.

Plečnik's unrealised projects were recreated with 3D modelling, visualisation and 3D print for the exhibition at the Plečnik House.

Jože Plečnik. The Architect’s Heritage. Right Around the Corner.

Take part in the digital mapping of Jože Plečnik’s heritage.

All locations of the Museum and Galleries of Ljubljana are closed for ALL VISITORS until further notice. 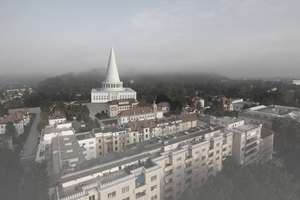