"Architecture begins and ends with stone"

On this day, 23 January 1872, architect Jože Plečnik was born in Ljubljana. "He was an idealist and he measured the present with a measuring stick of the past, he was conservative and saw his role models in the past, and perhaps that is why he managed to establish the firm discipline that is needed for any path to the future," Edvard Ravnikar, his student and a central Slovenian architect after Plečnik, appraised Plečnik’s creative principle. 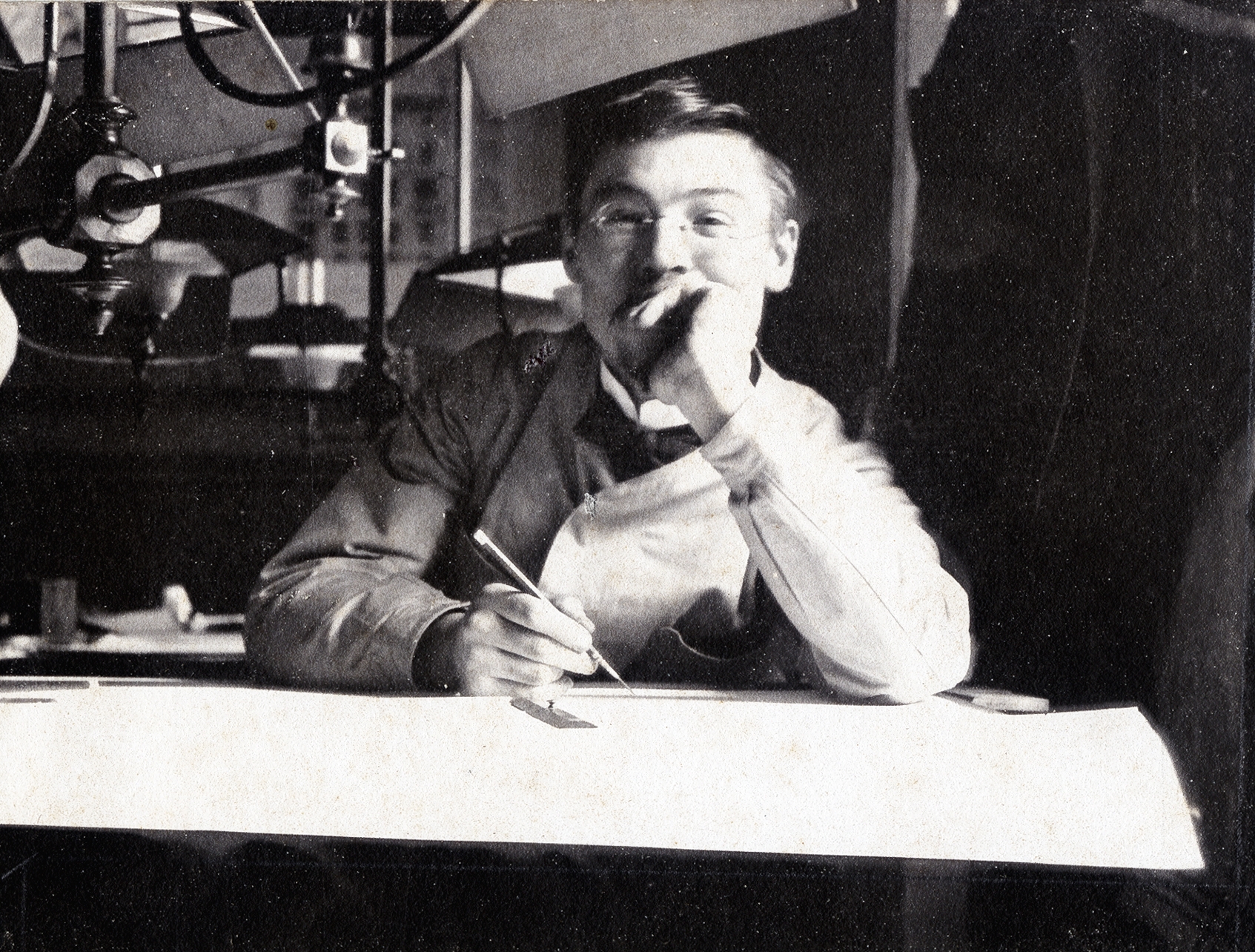 Plečnik in Wagner school in Vienna, around 1898 © MGML documentation

In the monograph about the renovation of Plečnik House curator Ana Porok wrote an interesting article about Plečnik's life:

Jože Plečnik 1872–1957
"He strived to establish architecture in his homeland, he fought for a sunny architecture. An outstanding draughtsman, a cultivator of form unmatched in Europe, an outstanding sculptor – the last knight of the Renaissance, not in the sense of a neo-style, but as a person who experiences things personally and tragically."[1]

This is how Dušan Grabrijan, the first graduate of the Ljubljana School of Architecture wrote about his teacher, the architect Jože Plečnik who was born on 23 January 1872 in a craftsman’s family in Ljubljana. Plečnik's father Andrej, married to Helena Molka,[2] had a joinery shop  in the Ljubljana suburb of Gradišče. There were four children in the family: beside Jože, there was his older sister Marija, his older brother Andrej and his younger brother Janez. His mother's Catholic upbringing and a deep sense of duty to do an honest day’s work marked the future architect for life.

After he finished primary school, Plečnik abandoned schooling already after his first year of grammar school, and had no option but to return to his father's joinery shop. He inherited his talent from his father and was destined to later take over the family business, yet he soon experienced how difficult this profession is.

He then continued his schooling in Graz, where he attended the Joinery Department at the State Trades School. He first encountered architecture when studying with Professor Leopold Theyer, whom he helped draw up plans for the construction of the new Graz bypass. He developed into an excellent draughtsman. In spring 1892 his father died unexpectedly, but Jože was still too inexperienced to take over the home joinery shop. He left for Vienna and started working for the renowned company of J. W. Müller as a furniture designer, while in his spare time he looked for inspiration in the museums and galleries of Vienna. For two years he was an interior designer for wealthy commissioners.

In 1894, encouraged by his family he presented his designs to Otto Wagner,[3] who had then started his professorship at the Vienna Academy of Fine Arts. Wagner was quick to notice Plečnik's extraordinary drafting talent, and first accepted him into his studio to give him the professional knowledge he was missing. After just one year he was able to enrol as a full-time student at the Department of Architecture at the Vienna Academy, and concluded his study in 1898 as the best graduate in Professor Wagner's class. He was awarded the so-called »Roman grant« that in 1898–99 enabled him to go on a study trip to Italy and France. His outstanding talent and creative potential were also perceived by Adolf Loos[4]:
"The prize [the Rome Prize of the Academy of Fine Arts in Vienna] has not been awarded to a square metre of drawing paper but to the man Plečnik. And he is the rarest of people, someone in need of Italian air like a morsel of bread. Because Plečnik is the hungriest of our young architects. That is why he needs to be fed. We can be sure of one thing: Whatever he will consume he will return it to us a thousandfold."[5]

In Vienna, Plečnik started his independent creative path, opening his own architectural bureau in 1900. In the first years furniture design is what brought him a great reputation. He built several villas and rental buildings for rich Viennese bourgeoisie. Zacherl house (1903–1905), signifying the climax of his early creativity, stands out with his distinctly personal style. At the time, the building was considered one of the most progressive technological achievements of modern architecture in Vienna. His Church of the Holy Spirit (1910–1913) in the workers' district of Ottakring with its integrated design and use of reinforced concrete is one of the first serious attempts at a thorough renewal of the spiritual dimension of Catholicism at that time.

It is due to the lack of commissions in Vienna and the offer made by his Czech friend Jan Kotĕra, who ensured Plečnik the post of a professor at the Academy of Applied Arts in Prague, that in 1911 Plečnik decided to move to Prague. For almost a decade, he then only performed teaching work which enabled him to immerse himself in the study of antique art. On 5 November 1920, Tomaš G. Masaryk, the first democratically elected Czechoslovakian president appointed Plečnik the main architect for renovation of the Prague castle. Plečnik was redecorating the castle with his faithful aide Otto Rothmayer up until 1934. He transformed the former absolutist imperial building into a symbol of the new democratic state and freedom. He rearranged the courtyards, gardens, staircases, and decorated the representation rooms and the president's apartment. He drew the symbolism that inspired him in his castle interventions from the Czech national/folk tradition. Here, Plečnik achieved one of his creative peaks. Later, he built the Church of the Most Sacred Heart of Our Lord (1928–1932) in the Prague suburb of Vinohrady.

Although he had perfect working conditions ensured in Prague, he decided to return to his native Ljubljana as soon as he was offered the opportunity. This was also the result of political changes, when in 1919 the long awaited Slovenian university was founded in the new state of the Kingdom of Serbs, Croats and Slovenians. The University commission entrusted Ivan Vurnik with the task of organising the Department of Architecture within the Technical Faculty. Vurnik invited Maks Fabiani and Jože Plečnik to hold the post of professor. Plečnik initially hesitated, but confirmed his acceptance of the professorship after Fabiani did not respond to the invitation. On 16 June 1920, Plečnik was unanimously elected a full professor of architecture and started to teach in the winter semester of the 1921/22 academic year. That is how two parallel opuses started to emerge – the Prague and the Ljubljana ones – that intertwined and influenced each other for over a decade.

"Plečnik was a distinctively self-taught person. The school had no influence whatsoever on him. Everything he heard he accepted with extreme prudence and reservation, often after a strainful reflection. Conversely, however, he took in with unwitting ease forms and decorative elements which he complemented with tremendous talent and skill. It is understandable and even essential that sometimes this was at the expense of construction and the organic side of the matter. He is standing high above his average professional colleagues. Plečnik knew how to protect his authority in front of his clients."[6] This is how Maks Fabiani, Plečnik’s by then well-established colleague, assessed him.[7]

Not only with architecture, Plečnik also influenced his students with his appearance. "He was dressed very simply. He wore a dark suit with a waistcoat, a simple shirt with a stiff collar and around his neck he wore a tie (a bowtie) that was slipped on. He did not know footwear other than widely designed half-boots.[8] On his head he wore a wide-brimmed hat with an open crown." During their studies, his students imitated their professor's outfit as a sign of affiliation. Anton Suhadolc calls them Plečnikians. He himself joined in with the imitation of the master's appearance.[9]

After World War Two, Plečnik mainly designed monuments of the National Liberation Struggle, renovated several churches and fitted out several baptisteries and chapels. The most prominent tasks of his late creative work are the renovation of Ljubljana’s Križanke open theatre (1952–1956) and the construction of a pavilion on the Brioni islands (1956).

Jože Plečnik was a member of the Masaryk Academy since 1925. In 1938, he became one of the first members of the newly-formed Slovenian Academy of Sciences and Arts, and was named an honorary citizen of Ljubljana in 1939. In 1949 he received the Prešeren Award, the highest Slovenian national award for artistic achievements. In 1952, on his 80th anniversary, he was awarded an honorary doctorate of both the University of Ljubljana and the Technical University of Vienna, and in 1954 he was nominated an honorary member of the Royal Institute of British Architects.

He died on 7 January 1957 in his home in Trnovo, and he is buried in his family grave in the Ljubljana Žale cemetery.[10]

When Plečnik died, Edvard Ravnikar, his student and a central Slovenian architect after Plečnik, appraised Plečnik’s creative principle as follows: "He was an idealist and he measured the present with a measuring stick of the past, he was conservative and saw his role models in the past, and perhaps that is why he managed to establish the firm discipline that is needed for any path to the future. Many times during his life he stood to the side, looking for his non-existent Renaissance prince, while showing with his diligence and engagement how the work should be done. Many people see in him a designer of ornamental details and small articles; while he also showed how to correctly and firmly lay stone upon stone, which is the essence of an architect's knowledge, and is more important than the style in which this is done."[11]