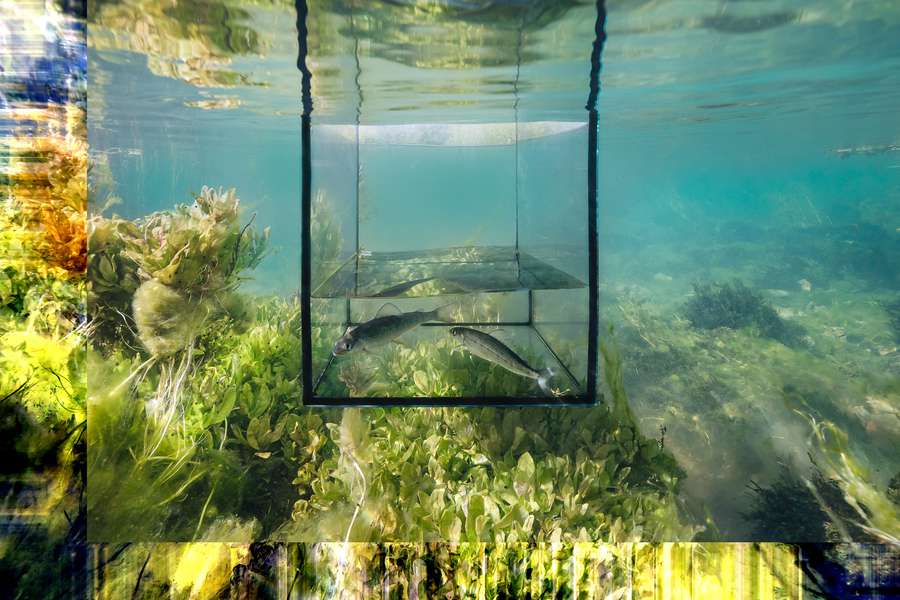 The audio-visual installation by Robertina Šebjanič, which will be on view on Wednesday, March 24, 2021, between 2 p.m. and 8 p.m. in the Ambrožev trg square park, is the third in a series of projects taking place in the run-up to the opening of Cukrarna.

Rivers are dynamic bodies of water, constantly changing and shaping their beds. These changes occur on a space/time scale that is more easily perceived by the smaller creatures living on or near the riverbed than by humans. For this reason, the audio-visual project Co_sonic 1884 km2 considers the river from the perspective of its animals. In doing so, Robertina Šebjanič departs from an anthropocentric view of the world and opens up a different way of looking at the "seven names of Ljubljanica" that we often overlook. This is a perception of the body of water – that has been given seven different names because the same river cuts a route through the underground karst and therefore, in some places, eludes our view, which is limited to the surface where it appears as separate bodies of water – as an integral whole.

This shift in perception of the river basin of Ljubljanica – including its karst upper reaches, the river itself, and its intermittent lakes – in its completeness is made possible by the very substance of water, both as a liquid that flows and as a biotope for different species of fish or olms. Just as the water moves, huchen, cactus roach, souffia, grayling and trout migrate along the river’s course. Olms, though normally confined to the underground karst caves, are sometimes brought to the surface by floods. Floods play an important role in the water cycle, providing food for organisms living underground. From the perspective of the Other, therefore, it is always the same waterway.

Through the use of sounds and images of the (co)habitation of different lifeforms in a range of river environments, both above and below the water, this project not only tells stories about the non-human inhabitants of these environments but also, more importantly, alerts us to the many ways in which humans affect aquatic environments, be it through riverbed regulation, navigation, regulation of biodiversity or exploitation of their natural resources. Co_sonic 1884 km2 presents us with a snapshot of the present time, when rivers around the world are losing their vitality as a result of human activity. The project also explores the concept of deep time and gives visitors an understanding of how the environment has developed over the ages, in ways that go far beyond the ecosystems we know today. It opens our eyes and prompts us to develop empathy towards non-human lifeforms, thereby changing our attitude to ecosystems, with a view to ensure their sustainability far into the future.