Jure Pukl, one of the most creative saxophone players of the younger Slovenian jazz generation, has been playing with Howard Curtis since 2004. Together they recorded several CDs, including Jure Pukl – The Long Run for the Austrian national broadcaster ORF (2009) and Howard Curtis’ Percussion Discussion. Their original music draws from different musical genres, with the common denominator being improvisation, interaction, lyricism, and journey to the unknown. Pukl is active on numerous world stages. Among other things, he won the Prešeren Fund Award.

Howard Curtis is a renowned percussionist and a mentor to many young musicians. Their common musical creation reflects their long‑standing friendship. 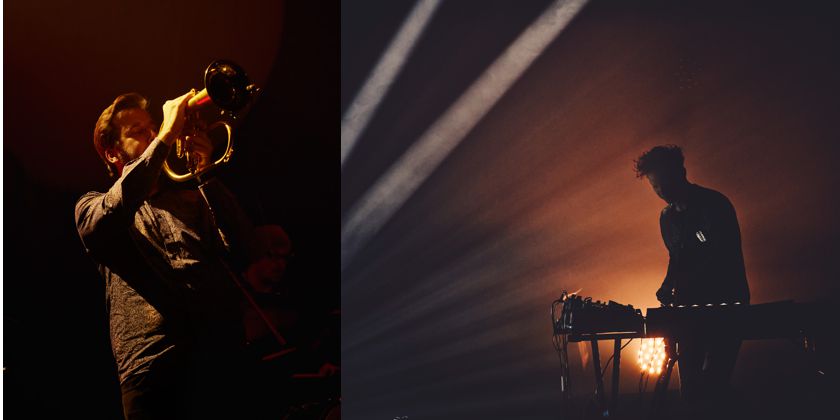 Igor Matković and Mario Babojelić will premiere a new project created at the invitation of the Sound Explicit organizer.

Igor Matkovič is one of the most interesting trumpet players on the Slovenian jazz scene. He studied trumpet at the Jazz Department of the University of Graz (Austria). In addition to trumpet, he plays keyboards and is a music producer. He has participated on more than thirty records and given concert both in Europe and USA. He has recently toured in China and Africa. He is a guest of numerous jazz festivals and prestigious concert halls.

As part of the Sound Explicit cycle, composer and accordionist Bratko Bibič will disperse the musical repertoire configuration with his collaborators, with whom he has been co-creating in the B.B. & Dedley Woodleybears quartet for more than five years. The musicians will intertwine Bibič’s selected imaginative film narratives and mixed medleys with their own collection of avant-garde jazz, new music, experimental world music, and improvisation. Piano interventions and interactions by Sašo Vollmaier will make an important contribution to the latter. The performance is related to the release of Bratko Bibič’s double album Hommage à cliché, which prominently includes the recordings of the songs performed and co‑authored by everyone involved.

Admission: 7 EUR
**Tickets are available at the working hours of the Jakopič Gallery and two hours before the event.