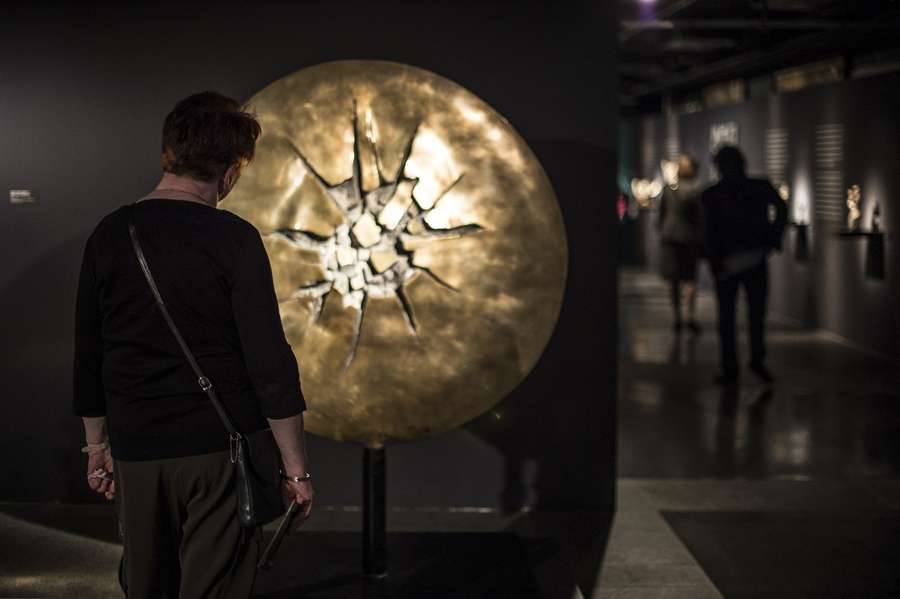 Stojan Batič: The Man and the Myth

A strong personal touch, classical understanding of art and a master's sense of complex sculpting materials are intrinsic to the work of Stojan Batič, a sculptor of the first post-WW2 generation of the 20th century whose retrospect entitled "The Man and the Myth" is on display in the Jakopič Gallery.

"Each of us has his or her own Odyssey", as Stojan Batič himself once commented; his Odyssey as a sculptor started 70 years ago when he, as the very first student of the newly established Academy of Fine Arts, today called ALUO, entered the artistic arena, starting to enrapture his admirers with a number of series of small-scale sculpture and portraits. In Slovenian art history he is generally known for his monuments and outdoor sculptures in Ljubljana, such as Ballet in Tivoli Park and Urška and the Water Man at the Ljubljana Exhibition and Convention Centre. "Through selected works from the artist’s consistently and carefully built oeuvre, visitors to this retrospective will be able to observe Stojan Batič as a sculptor whose creativity has always been based on carefully selected materials and their sensitive processing. Batič thus continues to seduce viewers into admiring and perceiving all characteristics of the classic tradition of sculpture; into experiencing the sculptor himself listening to ‘the hidden’ in material; into imagining the master creating the artwork that has previously existed in the illusion of the everlasting", according to the curator Barbara Savenc (she prepared the exhibition in cooperation with curator Marija Skočir).

Starting with clay and stone, the artist soon concentrated on bronze, creating with it the renowned series featuring miners which he later (1959–1965) developed into a number of pinnacles; today, we are even more fascinated than before by his cycle executed in lignite in which he departed from figurativism (which has nevertheless remained his preference until today), turning to the non-representational, abstract motif. His concluding and, no doubt, unique series called Explosions was created in co-operation with the Hrastnik Glassworks. From the early series of small-scale sculptures dedicated to the female figure, and through the miners mentioned above, Batič then reached for the ancient and immortal myths which he invoked in the Satyriad series. Through Satyriad, the sculptor retrospectively drew on mythology, emphasising man’s eternal and basically fundamental aspirations which no new generation can avoid. Batič’s sculptures offer an opportunity for profound reflection; the thought emerges and lingers, is created and permutated through the eye attentively and steadily pursuing the structures either created or retained on the surface of the sculpture, thereby shadowing their inherent life rhythm.

Stojan Batič was born on 2 June 1925 in Trbovlje. Growing up among the children of miners, he read extensively at an early age. He would knead and shape the clay which was in abundance around the local brickworks where he and his mother lived. Using chalk, he would also draw his first drawings. In the period 1941 to 1942 he worked in the Trbovlje mine as a technical draughtsman. Aged 17, he joined the miners, thereby avoiding being mobilised into the German army. He joined the partisans on his 19th birthday. He was active in the cultural section of the Kozjansko Detachment and as a war correspondent. After the war, he enrolled at the Academy of Fine Arts in Ljubljana, graduating in 1949 under Professor Boris Kalin. In 1951, he accomplished his specialist studies under Professor Frančišek Smerdu.
A Paris scholarship at the end of the 1950s allowed Stojan Batič to become familiar with contemporary sculpture. He was strongly influenced by Ossip Zadkine in whose studio he trained. Paris also introduced Post-Cubism to him which later, along with the realist bases, would mark his oeuvre. Paris offered many theatre performances, with Oresteia profoundly fascinating the young sculptor; it was the Greek mythology that the artist would later keep returning to.
Today, Batič’s highly individual expression can be observed in his small-scale, personal sculpture. His creations in clay, stone, glass, lignite, wood and metal were usually produced as a series. In the decades to follow, his supremacy – a master builder’s sense of materials along with a strong personal touch – helped create many public monuments and large-scale sculptures which remain part of urban centres across Slovenia even today.