Ben Harvey, a.k.a. Rabid Squirrel: A History of Line Rider 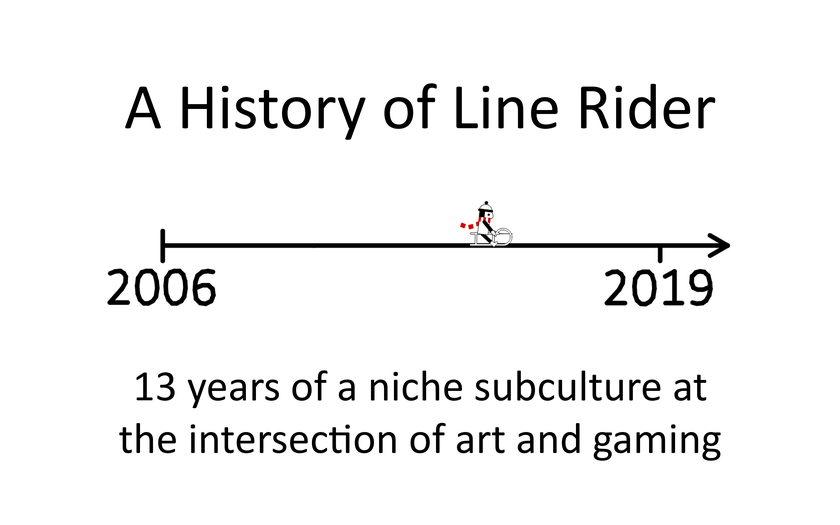 Award-winning internet phenomenon Line Rider, which began in 2006 as a flash “toy” uploaded to DeviantArt by student of industrial design Boštjan Čadež - Fšk, may have faded into relative obscurity by 2010, but a small but dedicated internet community continued probing the possibilities of this open-ended sandbox game for years. From lush landscapes drawn by hand, to advanced animation tools, to detailed analysis of the physics engine, the endless possibilities of the blank canvas have been explored beyond what anyone could have imagined. Line Rider aficionado Ben Harvey, a.k.a. Rabid Squirrel, will take us through more than a decade of Line Rider history, philosophy, and culture. Now that new viral works have brought Line Rider back into the cultural spotlight, what can we learn about art, gaming, and online communities from studying the history of the Line Rider subculture?

Ben Harvey, a.k.a. Rabid Squirrel, is a multimedia artist and designer who has been creating things in Line Rider since 2007. They ran the Line Rider community hub We Ride The Lines from 2008 to 2016, and have directed and produced numerous community events and projects. They have long been one of the most prominent curators and one of the foremost critical voices in Line Rider, known for analyzing Line Rider works from an artistic perspective and for creating and maintaining the Line Rider Archival Project. Following the viral success of their 51-minute track This Will Destroy You, they became the first Line Rider creator to freelance in paid commissions, as well as creating the video essay Line Rider: The Gamification of an Art Medium.

The lecture will be held in English.