On Monday 27 November 2017, a celebratory event was held at the Plečnik House, as the highly distinguished Tomas Garrigue Masaryk Order award was entrusted to the safekeeping of the Plečnik Collection of the Museum and Galleries of Ljubljana. The recognition, which was posthumously conferred to Jože Plečnik by the president of the Czech Republic Miloš Zeman at the end of October, was given to Blaž Peršin, MGML director, by Plečnik's relatives Janez Jocif, Alenka Črnič, Katarina Binder Bistan, Maruša Lesar Binder, Danilo Ženko, and Alenka Jocif. 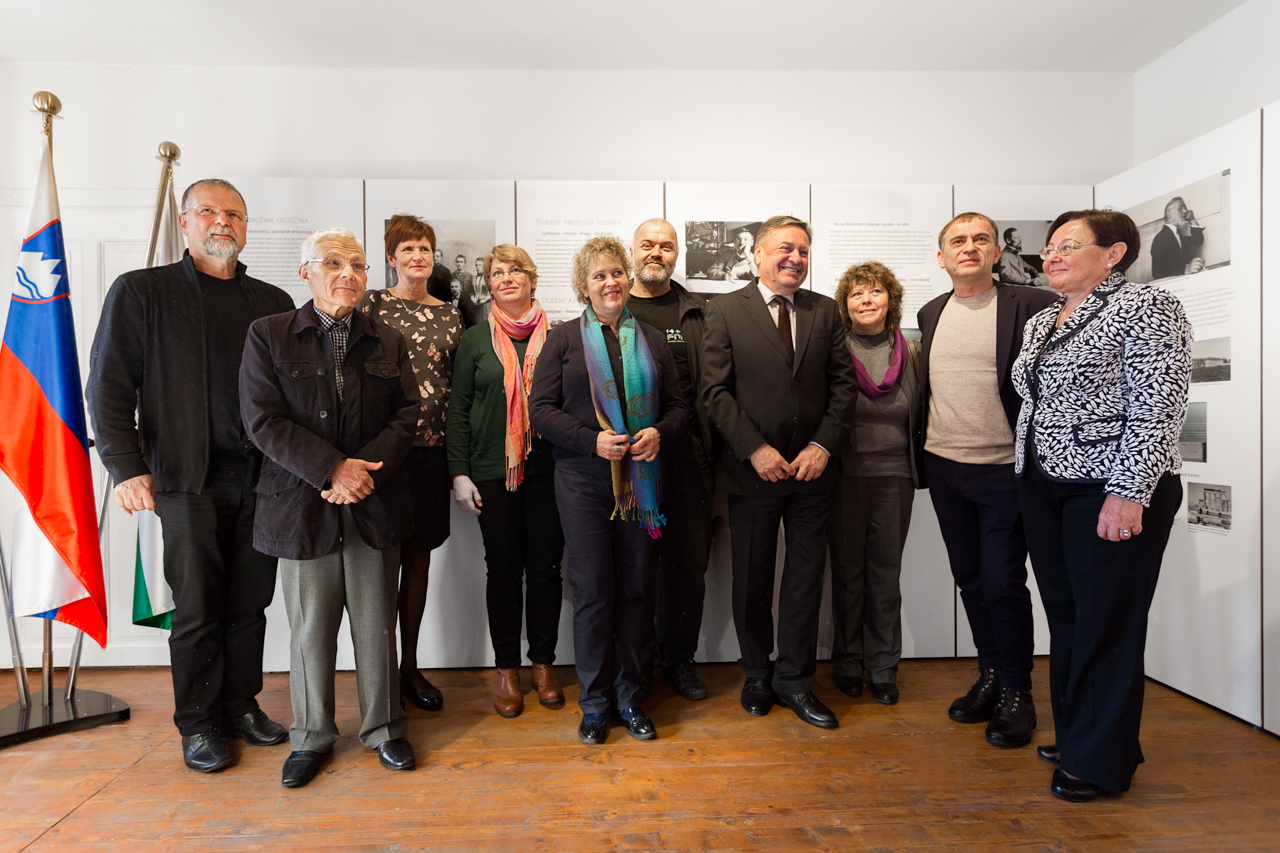 The Tomas Garrigue Masaryk Order, posthomously conferred to architect Jože Plečnik, is decorated with the motto "Truth Prevails" and a dedication that reads:

"The Czech Republic is awarding Prof. Jože Plečnik, for his extraordinary merits to the development of democracy, humanity and human rights, the Tomas Garrigue Masaryk Order of the I Class.
Prague, 28 October 2017."

On the Independent Czechoslovak State Day, 28 October 2017, the president of the Czech Rpublic Miloš Zeman posthumously awarded architect Jože Plečnik the Tomas Garrigue Masaryk Order. The disinguished national award was accepted, on behalf of all Plečnik's descendants, by Mr. Janez Jocif. He and his relatives today entrusted the TGM Order to the safekeeping of the Plečnik House. Already during the Prague ceremony, Mr. Jocif stressed, "The posthumous recognition from the Czech President Miloš Zeman, who spends his working hours in a residence arranged by none other than Plečnik, is for me an important spiritual message and an encouragement for these days. Plečnik should not only be remembered, his spiritual and creative energy should still serve us as an inspiration. Again and again. We are grateful that lately this mission has successfully been implemented, with expertise and a much needed dose of devotion regarding the architect's legacy, by the Plečnik House of the Museum and Galleries of Ljubljana. The house is also evolving into a space of active and creative connections between Plečnik and his admirers. That is why I am most pleased to give this recognition, which I am accepting in the name of all of his descendants, to the custody of the Plečnik House, which I believe to be the best place for the safekeeping of the award."

As the TGM Order award was given to the custody of the Museum and Galleries of Ljubljana, its director Blaž Peršin underscored, "We feel honoured and grateful for the trust from the architect's relatives, who announced the transfer of the award to the Plečnik House. This is also our covenant to try our very best to continue presenting the uniqueness and significance of Plečnik's work to both domestic and international publics."

Peršin also stated that the award will be on view to the museum's visitors at the permanent exhibition on Plečnik's work and life, at least until the end of June 2018.

The celebratory transfer was also accompanied by short addresses from Anton Peršak, Minister of Culture, Zoran Janković, Mayor of Ljubljana, and Her Excellency, Ms. Věra Zemanová, Ambassador of the Czech Republic in Slovenia.

Plečnik already moved from Vienna to Prague in 1911, when he accepted the position of professor at the Prague School of Applied Arts. In 1920, Tomaš G. Masaryk, the first democratically elected Czechoslovakian president, appointed him chief architect for the renovation of the Prague Castle. In one of his letters to Plečnik, Masaryk wrote, "Something grandiose could be done with the castle and its surroundings, and I see no other than yourself, who could accomplish such a historic task." Plečnik conceived the renovation in close collaboration with the president's daughter Alice Masarykova, and a close spiritual bond of friendship formed between the two. Thanks to Plečnik and his assistant Otto Rothmayer, the Prague Castle, once a symbol of absolutism and feudalism, became a beacon for the new democratic state between the two world wars. The castle complex, now much more connected with the city below it, saw a transformation of its courtyards, stairways and gardens under Plečnik's designs, alongside his arrangement of the protocol areas and the presidential apartment. When Masaryk abdicated in 1935, Plečnik relinquished his position of chief castle architect.

Alongside the comprehensive renovation of Prague Castle, Plečnik's other Prague work is the Church of the Most Sacred Heart of Our Lord (1928–1932), placed in the district of Vinohrady. The church's foundation stone was laid on 10 October 1928, on the tenth anniversary of Czechoslovakia, which was a symbolic attempt to make the church into a monument to the new state. Plečnik's original ideas in its design were also his answer to the challenges of the avant-garde.

Jože Plečnik (1872–1957) grew up in a family with four children. Jože's older brother Andrej was a priest (1866−1931), his younger brother Janez was a professor of anatomy at Ljubljana's Faculty of Medicine (1875–1940), while his sister Marija (1875–1940), married Matkovič, was the only one who created a family. She had three children with her husband Dragotin, the city barber; two daughters, Marija and Jela, and a son named Karel. Her daughter Marija, who was a teacher and a defectologist, never married, but after her retirement she took care of her elder uncle Jože Plečnik. The younger daughter Jela, married Likar, also became a teacher, while Karel devoted himself to priesthood. He was also the instigator for the construction of the Church of St. Michael in the Marshes and, until his death, the custodian of his uncle's estate at the Plečnik House. We have him to thank for the house's comprehensive preservation. Plečnik's only relatives are therefore from Marija's side of the family; from her three children only the youngest daughter Jela (married Likar) had children - three daughters and then six grandchildren (Janez, Alenka, Katariina, Maruša, Danilo and Matej, who already passed away).

The Tomáš Garrigue Masaryk Order or the TGM Order, named after the first president of the independent Czechoslovakia, is a high recognition of the Czech Republic awarded by the President of the Republic on the Independent Czechoslovak State Day, 28 October, when we commemorate the dissolution of Austria-Hungary and the declaration of independence of Czechoslovakia in 1918, or 1 January 1993 when the independent Czech Republic was formed.
The TGM Order is a recognition awarded by the President of the Republic to those who have made outstanding contributions to the development of democracy, humanity and human rights. Among the recipients of the order were President Václav Havel, writer Karel Čapek, poet František Halas, painter Emil Filla, and among foreign recipients were Henry A. Kissinger, Ryszard Siwiec, Lord Braine of Wheatley and others.