Plečnik's Ljubljana charmed visitors in Vienna and in Brasilia

The travelling exhibition Plečnik's Ljubljana marked the beginning of this month, as on 6 November the exhibition opened in Hauptbücherei am Gürtel, Vienna's Central Library. Before stopping in Vienna, the exhibition was also hosted, from late September to mid-October, by the Brazilian capital Brasilia. 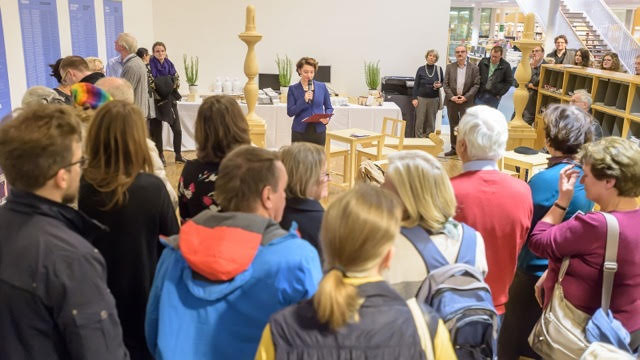 “The opening of Plečnik’s Ljubljana in Vienna attracted throngs of visitors and deservedly so, as Plečnik left a deep mark on the architectural visage of the Austrian capital. The opening was accompanied by the presentation of Symbolism of Jože Plečnik's Architecture, a book written by the renowned architect and a great connoisseur of Plečnik, Mr Andrej Hrausky, published this year in English and Slovenian variations. The event also honoured Slovenian culinary delicacies, offered by the Slovenian Tourist Board (STB). The exhibition will welcome visitors until 30 November", underscored the Slovenian Book Agency JAK.
The hosting of Plečnik's Ljubljana is only the overture into the exciting events of Buch Wien, the largest Austrian book fair (from 8 to 12 November).

The exhibition Plečnik's Ljubljana also travelled to Brasilia, the capital of Brazil, where the palace Buriti hosted it from 28 September to 13 October. It was a guest there to commemorate the 25th anniversary of diplomatic relations between the two countries, an the initiative put forth by the Embassy of the Republic of Slovenia Brasília. Mojca Grandovec, a representative of the Embassy of the Republic of Slovenia Brasília, highlighted that, "Architect Plečnik was as important for Slovenia, as Oscar Niemeyer for Brazil. Regardless of the prevalent architectural styles in the early 20th century, Plečnik developed his own architectural language, timeless and filled with symbolism. His architecture presents us with universal solutions and has remained current to this day."

The exhibition Plečnik's Ljubljana, part of the Slovenian commemorations of Plečnik Year 2017, was designed by the Museum of Architecture and Design (MAO) and the Museum and Galleries of Ljubljana, Plečnik House, on the initiative of the Ministry of Culture of the Republic of Slovenia.

Curators Ana Porok and Natalija Lapajne wrote in the exhibition’s introduction:
In 2017 we are celebrating the Plečnik year to commemorate the 145th anniversary of the birth and the 60th anniversary of the death of the architect Jože Plečnik. However, our recognition and valuation of his creations is not limited solely to a moment in time and space because his work touches the very universality and timelessness recognisable to all attentive observers. Characterized by the remains of the Roman period and particularly by Baroque style architecture, Ljubljana received its first modern urban plan, a work of Plečnik's contemporary Max Fabiani, after the earthquake of 1895. From being a sleepy provincial town, it transformed into a modern Art-Noveau-style capital displaying new aesthetic ideals. It took Plečnik nearly three decades to put his vision of Ljubljana into reality. Faced with an already built up space, he redesigned and upgraded it, and between 1921 and 1957 he filled its city grid with a number of impressive buildings.

The National and University Library, the Garden of All Saints – Žale, the St. Francis Church in Šiška, and the Ljubljanica bridges are some of his most important interventions within the city. The land axis leading from his house in Trnovo to the Congress Square and the Zvezda Park in the city center represents the city's cultural avenue. The water axis comprises the arrangement of the Ljubljanica basin, starting with the Trnovski pristan embankment, continuing with the Ljubljanica embankments in the city centre, the Cobbler’s Bridge, the Triple Bridge and Central marketplace, and ending with the sluices. With his arrangement of the embankments and bridges, placing of trees and other vegetation, which he understood as a means of architecture, Plečnik infused Ljubljana with a Mediterranean spirit. His third city axis connects the Jakopič Promenade in Tivoli Park with the Ljubljana Castle on the hill.
A special and sacred place is the Garden of All Saints, part of the Žale Cemetary where Plečnik, with extraordinary sensibility and veneration, honoured the citizens of Ljubljana. The architect has transformed the capital so much that we now see it as “Plečnik’s Ljubljana”, a singular urban phenomenon and a comprehensive artwork of the 20th century.

Simultaneously with the Slovenian capital Plečnik also worked in Prague, where he made interventions in parts of the Prague Castle for the then president Masaryk and built the Church of the Most Sacred Heart of Our Lord, works which inspired many Czech architects. Numerous ideas were born, reciprocally multiplied, diversified and realised in one of the capitals. A joint effort of Slovenia and the Czech Republic for the international renown of the architect is now focused in the nomination project for the inscription of his works on the UNESCO World Heritage List.

Independent from contemporary architectural styles of the early 20th century, especially of the reigning modernism, Plečnik was able to develop his unique architectural language. His unique approach to the reinterpretation of architectural heritage and an extraordinarily rich symbolism contain elements of timeless architecture. With his approach he upgraded and reinterpreted space, while he modernised it and looked for new usages of its traditional function. His architecture offers universal solutions for key questions in different generations, which makes his works perennial.