On Saturday 28 October 2017, the Independent Czechoslovak State Day, a ceremony was held at the Vladislav Hall in the Prague Castle, at which the president of the Czech Republic, Miloš Zeman, posthumously awarded Jože Plečnik with the Tomas Garrigue Masaryk Order. The distinguished award was conferred in Prague upon Mr. Janez Jocif, who accepted it in the name of all Plečnik's descendants. The award will be given to custody of the Plečnik House. 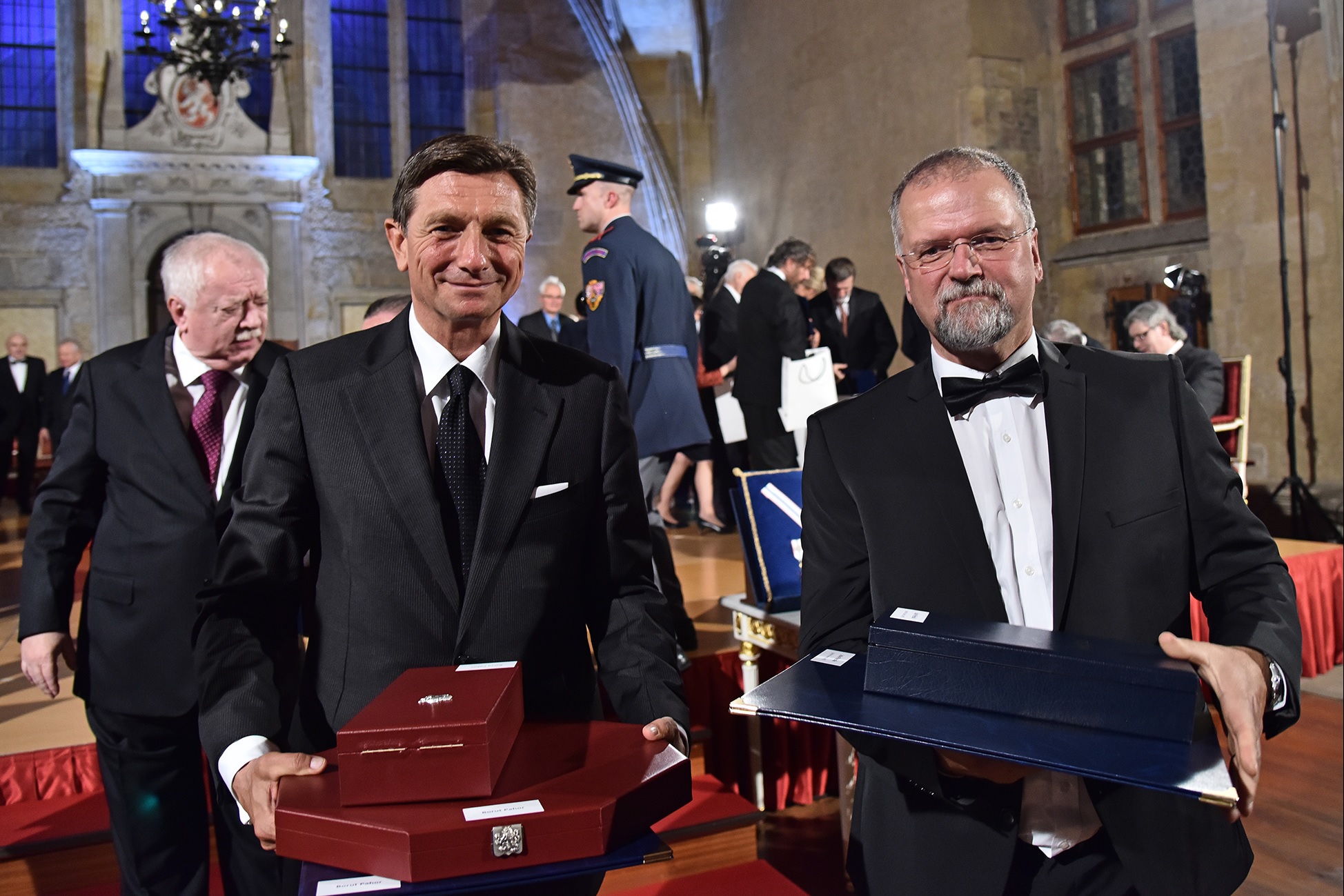 With his rich and diverse oeuvre in architecture and design, the Slovenian architect Jože Plečnik represents an exceptional cultural heritage, not only on the Slovenian level, but on a European and global scale. He spent his life in three Central European capitals. All three were left with his artistic impression, and timelessly connected through his works: Vienna, Prague, and Ljubljana. The exceptional importance of Plečnik's design was acknowledged by the current Czech President, Miloš Zeman, who posthumously awarded Plečnik with the Tomas Garrigue Masaryk Order. Her Excellency, Ms Věra Zemanová, the Ambassador of the Czech Republic in Slovenia, highlighted that "[Plečnik] was not just an extraordinary artist and architect, he was also one of the exceptional figures who, due to his work on the Prague Castle, connects the Slovenian and Czech people to this day. His work is, due to his collaboration with President Masaryk and the pre-war republic, a symbol of democracy. I believe that the joint nomination of his oeuvre for the UNESCO World Heritage List will soon end in success."

On behalf of all of Jože Plečnik's descendants, Mr Janez Jocif accepted the award at the Saturday event in the Czech capital of Prague. At the event he stated that "My personal relation towards the architect Jože Plečnik developed purely by chance. Fortunately or unfortunately, we do not get to choose our own family. Yet the memory of him goes back to my earliest years of life when we often visited Karel Matkovič, my mother's uncle and Plečnik's nephew, who lived in the architect's home in Trnovo. While the elders were talking, I used my time there to explore the myriad of smaller objects on the table and in the drawers of Plečnik's bedroom and study. All of this was fascinating to my childhood imagination. Later on, I remember the discrepancy in the valuation of his works between my family circle and the general Slovenian public. The latter was often burdened with the complexities of everyday politics, which too often reflected on the results of Plečnik's creativity with ignorance. The fact is that his value was first discovered – or, better, confirmed – abroad. I still feel that without foreign confirmation and help, Plečnik would still perhaps sit in the shade of the proverbial Slovenian smallness. Thus the posthumous recognition from the Czech President, Miloš Zeman, who spends his working hours in a residence arranged by none other than Plečnik, is for me an important spiritual message and an encouragement. Plečnik should not only be remembered, we should still use his spiritual and creative energy for our inspiration. Again and again. We are grateful that lately this mission has successfully been implemented, with expertise and a much needed dose of devotion regarding the architect's legacy, by the Plečnik House, a part of the Museum and Galleries of Ljubljana. The house is also becoming a space of an active and creative connection between Plečnik and his admirers. That is why I am most pleased to give this recognition, which I am accepting in the name of all of his descendants, to the custody of the Plečnik House, which I believe to be the best place for the safekeeping of the award."

The Museum and Galleries of Ljubljana (MGML), the institute managing Plečnik House, has welcomed the decision of Mr Janez Jocif to give the award on behalf of all of the descendants to the custody of the Plečnik House. Blaž Peršin, the MGML director, underscored, "Plečnik's architecture is synonymous for the uniqueness of our capital and other Slovenian cities, all enriched by the architect's work. Ljubljana and Slovenia can take pride in this award, and use it on different occasions to establish and enhance political, social, cultural and economic ties. These ties are especially strong between Ljubljana and Prague, two cities simultaneously co-created by Plečnik. We are happy that the President of the Czech Republic, Miloš Zeman, recognised this connection and awarded Plečnik with the distinguished posthumous recognition, and we also feel honoured and grateful for the trust from the architect's relatives, who announced the transfer of the award to the Plečnik House for safekeeping. This is also our covenant to try our very best to continue presenting the uniqueness and significance of Plečnik's work to both domestic and international publics."

The Tomáš Garrigue Masaryk Order is a recognition conferred by the President of the Republic to those who have made outstanding contributions to the development of democracy, humanity and human rights. Among the recipients of the order were President Václav Havel, writer Karel Čapek, poet František Halas, painter Emil Filla, among foreign recipients were Henry A. Kissinger, Ryszard Siwiec, Lord Braine of Wheatley and others.

Alongside the Order, the President also confers the most distinguished recognition of the Czech Republic, the White Lion Order, and other smaller recognitions: Medal for Heroism and Medal of Merit. At the annual ceremony in the Vladislav Hall, the largest hall in the Prague Castle, attended by distinguished guests, the President usually confers recognitions from thirty to forty individuals.