Today, 3 December 2019, the University of Ljubljana commemorated its hundredth anniversary with a formal sitting. At the sitting, the Mayor of Ljubljana Zoran Janković presented a precious gift to the rector, Prof. Dr. Igor Papič, in the name of the city – a new rector’s chain, created after Jože Plečnik’s original designs. 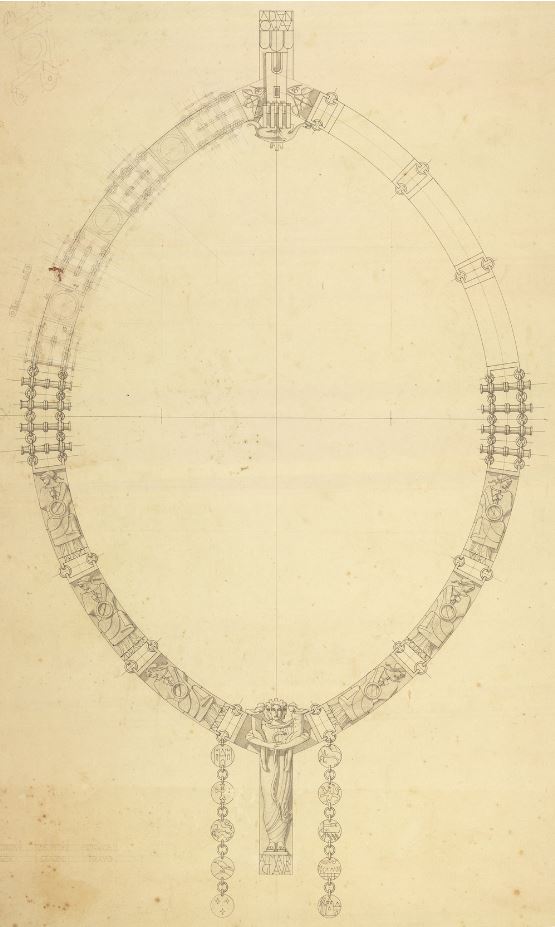 The original Plečnik drawing of the rector’s chain for the University of Ljubljana, 1929, graphite and black ink © MGML Documentation, Plečnik Collection

“The rector’s chain, created after the original designs of the architect Jože Plečnik, in custody of the Plečnik Collection at the MGML, was made by the designer team consisting of Matija Suhadolc, Stanko Kolbezen and Jure Smole. The team worked on the project with great attention to detail and eventually realised this important symbolic work by our greatest architect. With how only he could manage, Plečnik embodied the symbolic meaning of the new university for the essence of Slovenes as well as for their spiritual and material development. The City of Ljubljana and its mayor Zoran Janković wanted this gift to emphasise the importance of our, Ljubljana’s, university for the development of the city and the country as a whole, as it represents the desire for progress, independence, and the efforts to enhance the importance of science and arts in our society,” explained Blaž Peršin, Director of the Museum and Galleries of Ljubljana.

Architect Jože Plečnik prepared the design for the rector’s chain in 1929, on the tenth anniversary of the University of Ljubljana. Its founding members were the faculties of arts, medicine, law, technology, and theology. Therefore, the chain is engraved with reliefs stating: NATURE, HEALTH, LAW, LANGUAGE, WISDOM, and FAITH. The centre of the chain depicts the symbol of the University with the lettering below: ALMA TRIGLAVA, while the coat-of-arms of the City of Ljubljana lies on the reverse side.

According to Dr. Milan Vidmar, rector of the University of Ljubljana in 1929, the mayor of the city Dr. Dinko Puc presented the rector’s chain to him at a ceremony. Unfortunately the original chain was lost during World War II.

The new version of the rector’s chain was made on the basis of Plečnik’s original drawing of the chain, which is kept at the Plečnik Collection MGML.

Share:
Jože Plečnik. The Architect’s Heritage. Right Around the Corner.
Atlas of Furniture Design
A Treasured Donation: Plečnik’s “spikes”
The Story of the Škorjanc Chalice Carries a Rich Symbolic Message
The Catalogue and Exhibition Graphics of the “How to Draw a City?” Project Convinced the Jury of the Brumen Award