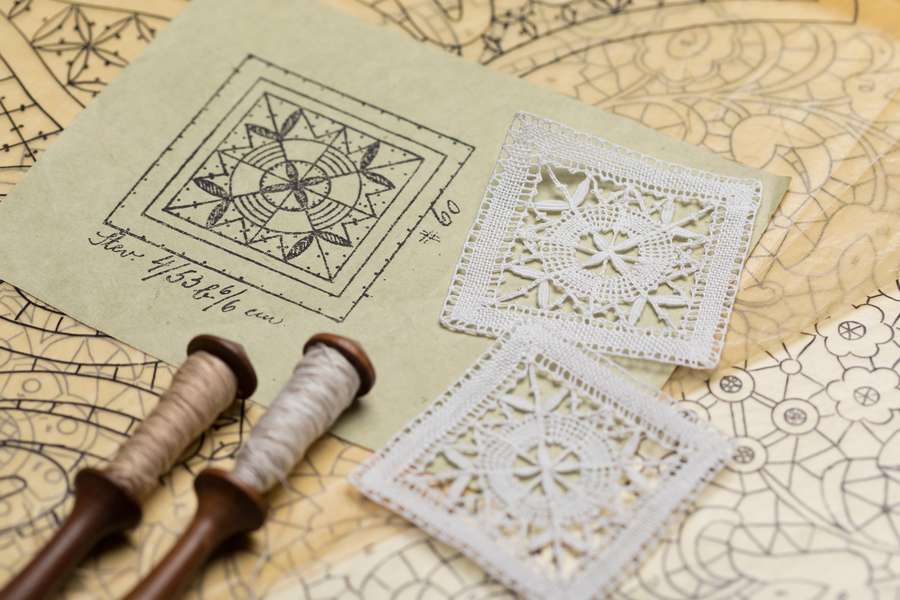 Patterns of the DOZ Ljubljana

Although people often think of lace as a conservative, frivolous material, many hours of meticulous work, skills, and knowledge are invested in its precise creation during which fine motor skills, precision, and persistence are developed and preserved – virtues that are often overlooked yet also missed in the modern society. In recent decades, the interest in bobbin lacemaking has been increasing. The younger generations successfully bring together the traditional and the modern, while lace has also become an element of contemporary visual arts practices.

About the DOZ Ljubljana and its lace patterns
In 2019, a hundred years have passed since the Provincial Government for Slovenia established the Central Institute for Women’s Handicraft in Ljubljana in the efforts to encourage and develop women’s handicrafts after World War I. The Institute, renamed as the Central National Institute for Women’s Handicraft in Ljubljana (short name: DOZ Ljubljana), was active in three areas: education, production, and sales of bobbin lace and other women’s handicraft products. It also actively promoted the Slovenian bobbin lace.

The Institute dedicated to lace and other handicrafts received many awards and acknowledgements at fairs in Slovenia and abroad. After World War II, in 1946, the new authorities disbanded the DOZ Ljubljana and established the DOM Ljubljana institute and the School of Arts and Crafts in Ljubljana. The memories of the DOZ faded and its archives were gradually lost.

This has changed recently, as the City Museum of Ljubljana has managed to collect the patterns from the DOZ Ljubljana after a systematic search and thanks to the donors and a network of associates: Marica Albreht from Žiri; Darinka Kette from Horjul; Helena Kramar and Marija Koblar from Železniki; Anica Mravlja from Hotavlje; the Polhov Gradec Bobbin Lacemaking Society; and Magda Strah, Jelka Štern, and Antonija Thaler (1914–2014) from Ljubljana. Most of the original lacemaking designs have been discovered among the patterns recovered from the former DOM Ljubljana institute, while a few of them have been preserved in the lacemakers’ private collections. We have digitised and registered all of them.

The inclusion of the Slovenian bobbin lacemaking in UNESCO’s Representative List of the Intangible Cultural Heritage of Humanity in 2018 represented an additional incentive to prepare a detailed presentation of the DOZ Ljubljana heritage at an exhibition and in a catalogue.

Last year, the Ljubljana lacemaking community was invited to take part in the new bobbin lacemaking interpretation of the old DOZ patterns. 24 creative bobbin lacemakers, including eight girls who are still primary school pupils, participated in the venture. The interpretation and selection of bobbin lacemaking techniques were up to them, and they have produced 35 new laces. With their works, they have brought together the past and present, given new life to the old patterns, and used all their knowledge, skills, and free time to make the laces. They gifted most of them to the City Museum of Ljubljana and thus contributed to the treasure cove of the tangible and intangible lacemaking heritage (of Ljubljana).

We would like to take this opportunity to sincerely thank everyone once again!

In the coming years, the Museum will also present the lacemaking heritage of the DOM Ljubljana institute and the School of Arts and Crafts in Ljubljana. If you are interested in laces and handiwork, we can definitely meet again then!

The exhibition is presented in a catalogue containing 32 selected patterns from the City Museum of Ljubljana collection. These are accompanied by photographs of various laces, most of them newly made, which can assist you in your bobbin lacemaking efforts and test your patience. 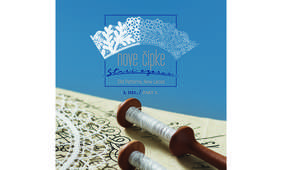