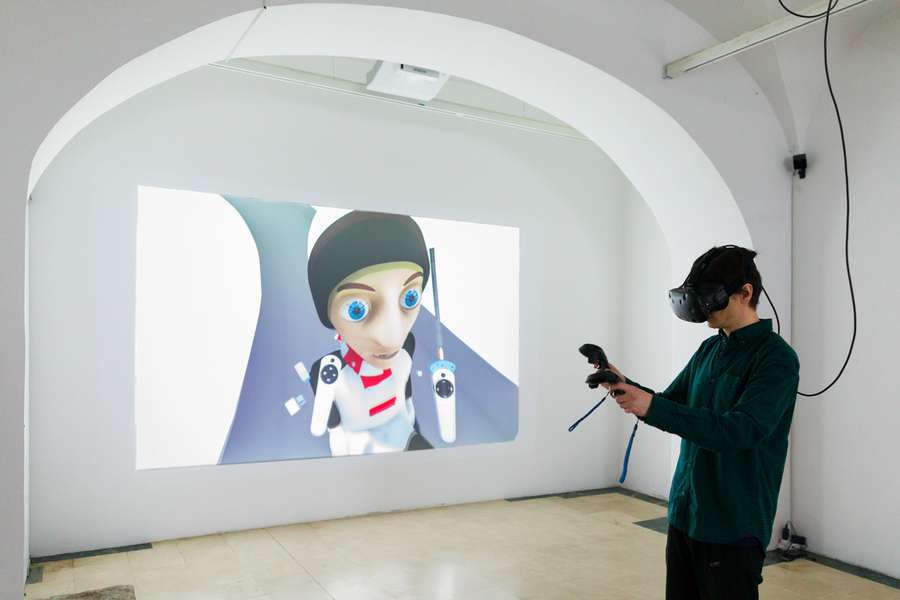 The exhibition presents the story of the Line Rider web game (simulating a sledger going down the slopes), with which Boštjan Čadež - Fšk created a global phenomenon.

"This is a project I did for illustration class. It’s not a game, it’s a toy. What I mean is there are no goals to achieve and there is no score."
—Boštjan Čadež - Fšk, DeviantART, 2006

Boštjan Čadež - Fšk, author of the Line Rider web game, posted his school assignment on to DeviantART forum in 2006, when he was a third year student of industrial design, and it became a global phenomenon overnight. He ingeniously added gravity to a simple child-like drawing of winter sledding delights and let the player define the line of the track by drawing it with his mouse while observing what will happen to the sled rider, who is left to the mercy of the slope. Perhaps the secret of Line Rider going viral is its promise of the fulfilment of childhood dreams about a drawing coming alive, or perhaps answering the question to what void at the end of the line could Osvald Cavandoli's little man from La Linea cartoon have fallen.

Behind the seeming simplicity of the game there stands a long period of dedicated programming and thorough thought, which enabled the web toy to become a teaching aid and subject to scientific papers on phisicality and gravity. It resulted in instant copying to several versions of computer games, exploring technical skills (qiurqing), but most of all, the potential manifested in using Line Rider as a drawing and animation tool for artistic expression. Boštjan Čadež - Fšk, the promising multimedia artist, received a prestigious award for innovation in 2007 at the GDC, Game Developers Conferece in San Francisco, for his interactive computer toy, designed with Zdravko Papič as his menthor. The company InXile Entertainment bought rights for the game.

Line Rider's story is global and after 13 years, it still has active players, creative, artistic and gaming communities, who invest countless hours of work into elaborate animatons, mostly for art and music videos with millions of views on social platforms. The most well-known are perhaps Techdawg with the art video Make Believe and DoodleChaos with Mountain King music video.

Does it make sense to exhibit a web toy, essentially a computer program, in the white cube of a gallery, when it obviously already has its due place and attention in the digital universe? How to design an exhibition to still appeal to and raise interests of the critical audience of Line Rider enthusiasts? We are using playfulness in the exhibition, the same playfulness Boštjan Čadež -Fšk pointed out in his comment of the original Line Rider version. It is implied in the artistic status of the gallery to present potential artistic achievements, and organisation is an opportunity to reflect on what is already created and an encouragement for fresh production.

Match Gallery is focusing on Boštjan Čadež - Fšk thirteen years after the launch of Line Rider with variations of the game through time and some of the best videos as selected by Ben Harvey (Rabid Squirrel), longtime Line Rider artist, producer, archivist, critic, and community administrator. The exhibition is also designed as an interactive topical playroom, for which the artist created beta version of the Plane Rider anew, which will premiere at this occasion. This time, Boštjan Čadež - Fšk added a third dimension to the otherwise two-dimensional rider of the line. Using VR headsets, one draws the sledding track and slopes in a virtual landscape, as Bosh, the rider, slides down them, or better, falls into depth. This new dimension offers an open sandbox for unimaginable sculptural and architectural challenges within virtual reality.
—Jani Pirnat

Boštjan Čadež - Fšk (Ljubljana, 1979) finished the study of industrial design at the Academy of Fine Arts and Design in Ljubljana. As an intermedia artist, lately he’s been focusing mostly on the fields of computer, real-time-generated and generative graphics and robotics, presented in the form of performances and installations. He’s received several prestigious awards and prizes for his innovations in design and programming. His previous artistic endeavours include graffiti, street art and VJ-ing. He’s received the "Zlata ptica" award in 2013 in the category of intermedia art.

Production: Museum and Galleries of Ljubljana
Curator: Jani Pirnat
Artist: Boštjan Čadež - Fšk
This project has been made possible by: City of Ljubljana
Special thanks to: Velika planina 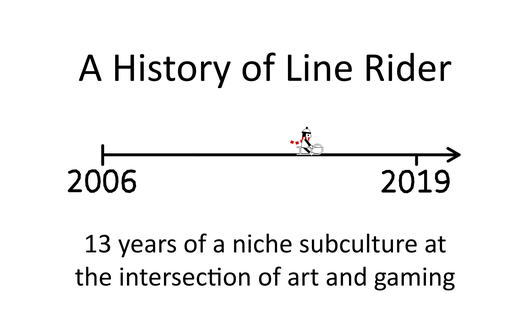 Sat
Mar 2019
Lecture
5 p.m.–6 p.m.
Match Gallery
Ben Harvey, a.k.a. Rabid Squirrel: A History of Line Rider
13 years of a niche subculture at the intersection of art and gaming

Wed
Mar 2019
Lecture
5 p.m.–6 p.m.
Match Gallery
Ben Harvey, a.k.a. Rabid Squirrel: A History of Line Rider
13 years of a niche subculture at the intersection of art and gaming
All events - Match Gallery • All events - MGML