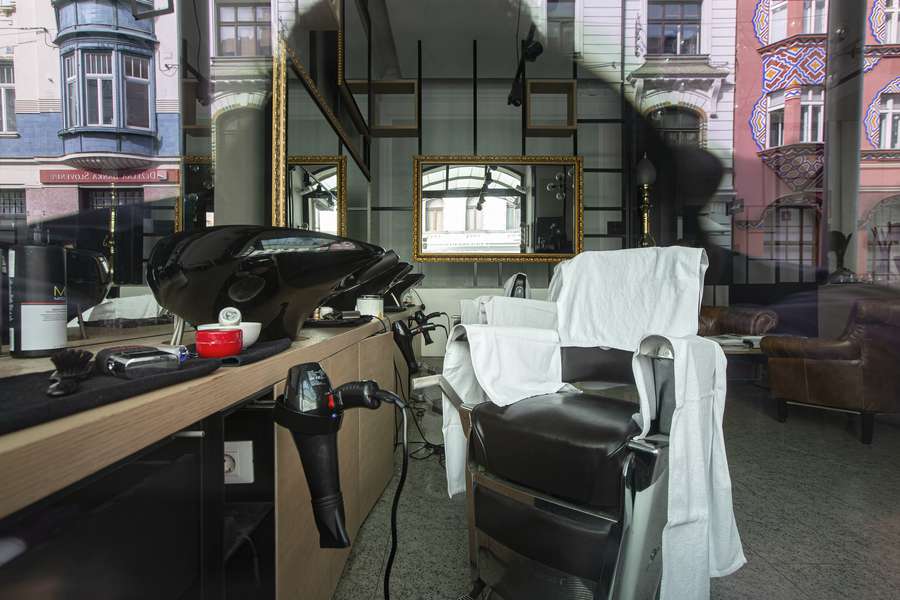 Due to the uncertain accesibility of cultural content caused by frequent changes in security measures, the exhibition is displayed 24 hours in the gallery windows facing the street, from where it invites visitors to safely enjoy a selection of original photographs by Borut Krajnc.

For over thirty years, Borut Krajnc has worked as a professional documentary reportage photographer, an excellent observer and an experienced visual chronicler of permanent Slovenian transitional history, equipped with an incredible ability to document changes of societal reality. Often he would accompany these observations with a sensitive intellectual commentary. He perceives moments in which the economical and political structures are exposed as glitches. He compulsively pursues and documents them. The selection of repetitive patterns is presented to the public in the form of original photographs in art galleries, a mirror to reflect the "emperor's new clothing".

The exhibition Prehajanje (Transition) is a logical continuation of the trilogy of greed. In Krajnc's 2008 show Praznine (Emptiness), photographs of empty billboards, ruthless visual and material pollutants of the landscape, created by marketing industry in its drive for profit and financial gain, have been a premonition of the burst of real estate bubble. Politika (Politics, 2014) is a calendar made with the presidential candidate Borut Pahor's election campaign photos, taken at several of his visits to work collectives where he posed as one of the workers. As one of collective, one who understands. His greed for political power forced him to use populist strategies of illusion dictated by marketing. The exhibition Pritisk (Pressure, 2020) tackled the vulgarity of major daily newspapers' submission to the pressures of private interests, which lost their relevance as a public media when they started to include full-page advertisements on their front pages. As lucidly remarked by Jure Trampuš (Mladina 7/2020, 65), the chronological order of Krajnc's exhibitions outlines a certain transition from fear of the void, created by the absence of capital, towards an intricate political scenography without real content, representing capital and devoid of content under the pressure to promote capital.

But now fear of the void is gone, and only void induced by fear remains. The eye-opening kick of the COVID-19 pandemic brought the world to a halt and gave us some time to think. What do we actually want once nobody forces wishes upon us? The race for economic growth and materialism, which were supposed to fulfill us in terms of status and spirit, has in the light of personal and overall health danger proved to be banal.

28 Days Later (2002), a horror movie by Danny Boyle in which the world is threatened by a virus turning people into zombies, was mostly advertised by a one minute scene of an empty London city centre – an awe-inspiring cinematographic challenge in those days, when the city's hustle and bustle was incessant. Nobody could imagine that in reality a global effect of the same nature could be induced by a pandemic of a much smaller scale.

Exactly a year ago Borut Krajnc immediately responded to the historic moment of the first pandemic wave by taking photographs of the economy brought to a standstill; streets without traffic, empty alleys and display windows, cafes, bakeries, hairdressers', shops, lottery stands etc. Consequences of panic and sudden disruption of work can be seen in certain places: half opened boxes, brooms set aside, dropped clothing, open doors… But in other places, one is surprised to find very tidy spaces, mopped floors, stacked tables and chairs, clean shelves, all of these abandoned indefinitely. A peek through empty display windows, through which the curious photographer pointed his camera, reveals that these spaces still have much to offer, only the society is gone. Emptiness is further enhanced by reflections of abandoned city landscapes in the corners of the display windows.

We were on a reckless race and but the brake has been pulled. Is this going to be an iniciation, will we reconsider our needs and come up with a sustainable way to transition into something new, perhaps better? Or is it all just an event without consequence, when society is momentarily tranquilised by the shock, but then continues on as if nothing had happened?

What will we transition to?

Production: Museum and Galleries of Ljubljana
Curator: Jani Pirnat
Photographer: Borut Krajnc
This project has been made possible by: City of Ljubljana