“Dragica Čadež is one of the first Slovenian artists that devoted themselves to sculpture as an open form, sculpture that opens out into space and enables the spectator to travel not only alongside it, but also through it. Her creative oeuvre is marked by cycles such as: Sarcophagi, Dwarves, Doors, Lignified Shadows." 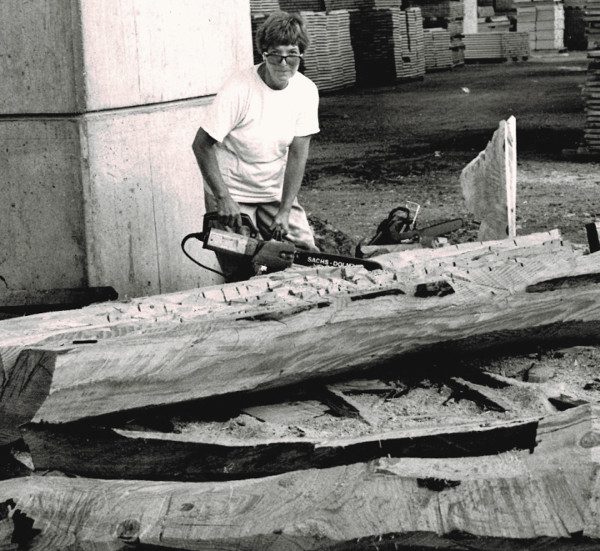 "In discovering the world of shapes and relations and exploring structures and visual possibilities, the sculptress chose as the material essence of her creation primarily wood, but also clay. She knows wood to the core and confidently works it with various tools, especially the chainsaw. This way of working enables her to take away and deliberately articulate; the cuts are graphically balanced in characteristic zigzag folds with an emphasis on dynamics, but with the preservation of the basic volume. Her artistic expression is expressive and her stroke determined. The exceptional creative power of Dragica Čadež is marked by curiosity, a sincere and relaxed zest for artistic creation and also unselfishness and directness. With her artistic, creative oeuvre and life’s work, she has permanently enriched the Slovenian and international cultural treasure chest,” they wrote at the Ljubljana Fine Artists Society (DLUL), which this year conferred the Ivana Kobilica Award in the field of fine and visual arts for the third time.

The works of Dragica Čadež, who received the 2020 Ivana Kobilica Lifetime Achievement Award, can currently be seen at A Story of Wood and Clay, mounted at the City Art Gallery Ljubljana. The exhibition and an extensive catalogue expertly and visually precisely delve into the refined, incredibly rich and substantively and graphically rounded oeuvre, thus enabling us to see and sense the sculptress’s creative energy, continuity of creation and the authenticity or sincerity of her graphic language. The comprehensive overview and the analyses of all the more important works by the academically trained sculptress Dragica Čadež, which were arranged in cycles, prove a great diversity of the artist’s works.