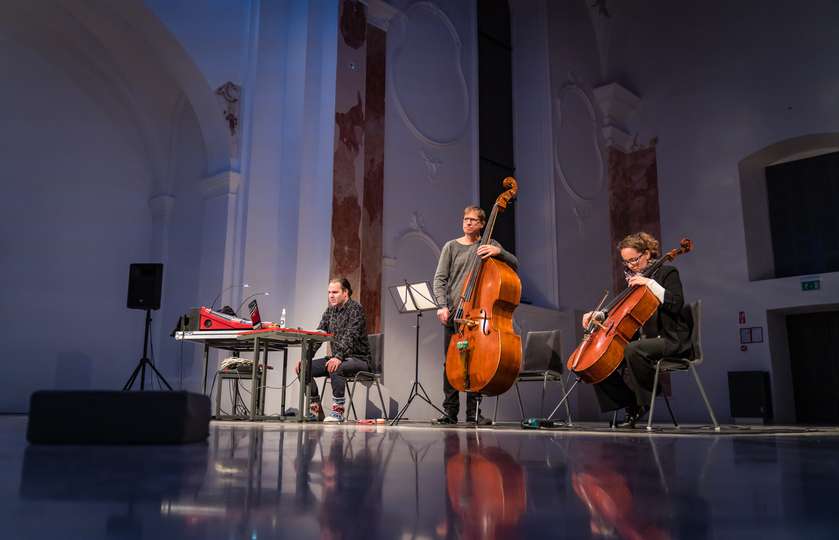 Monolit is a concert version of the contemporary drone music composition on the theme of the construction of a fictional language emerging from large drones used by the musicians to fill the room and weave a multidimensional soundscape of aliquots, reverberations, and rhythmical waves. Accompanied by electronic editing and following the musical score, the musicians are discovering the microcosm of individual tones and enter an intense state of focus, which they transmit to the audience. Monolit relates freely to the monoliths of Clarke’s and Kubrick’s stories 2001: A Space Odyssey. It seeks to create an imaginary contact and expand our perceptions, or in the words of Carl Sagan: In the deepest sense the search for extra-terrestrial intelligence is a search for ourselves.

Tomaž Grom is a Slovenian double bass player and composer. As an improviser, he is dedicated to exploring popular double bass playing techniques, guided by the principle of spontaneity. He has performed in numerous ensembles of various musical genres at festivals across Europe and Canada. He has written original music for more than sixty performances and films in Slovenia, Croatia, Serbia and Italy. He has received several awards for this work. He is the founder and programme manager of the Sploh Institute, which is engaged in the production of music and performance projects, as well as education and publishing. He regularly collaborates with Samo Kutin, Vid Drašler, Jošt Drašler, Irena Z. Tomažin, Andrej Fon, Tao G. Vrhovec Sambolec.

Zlatko Kaučič, a leading Slovenian jazz musician, drummer, percussionist and composer, has recorded more than sixty CDs during his successful forty‑year career, including the solo project Round Trip, Emotional Playgrounds, Golden Boat, Golden Boat 2, Peacock (among the top 100 best albums of 2007 on the website All About Jazz), The Tolmin Revolt, triple album on the 30th anniversary of his career (ranked among the top 10 albums of 2009 by the British magazine JazzTimes and Italian magazine Jazzcolours), Emigrants (ranked among the 100 best albums of 2011 by critics), Round About One O’Clock (ranked among the top tem albums of 2011). Zlatko Kaučič played and recorded with musicians such as John Lewison, Kenny Wheeler, Paul Bley, Albert Mangelsdorff, Chico Freeman, Louis Sclavis, Peter Peter Brözman, Alexander Bălănescu, Marc Ribot, and others. He is the leader of the music band Kombo in Nova Gorica and has also produced music for several films and documentaries in Spain, Italy and Slovenia. He received the Bronze Key of the City of Hong Kong (1979), Silver Key of the City of Vigo (Spain), and recognition awards by The Municipality of Brda (2008) and by the Prešeren Fund (2011).

The musicians will present their new album, The Ear Is The Shadow Of The Eye.

Admission: 7 EUR
**Tickets are available at the working hours of the Jakopič Gallery and two hours before the event.