Madness from Osaka teleported to the Match Gallery

A gallery has been built within the Match Gallery for "Work or Your Art", a group exhibition of an art collective deriving from the Shimbun Onna Gallery in Osaka. Visitors can thus relive the proportions of the Japanese gallery and the circumstances in which the Osaka art scenes operates in. It does not wait where and when it can express itself best, but rather accepts facts and expresses itself under the given circumstances. 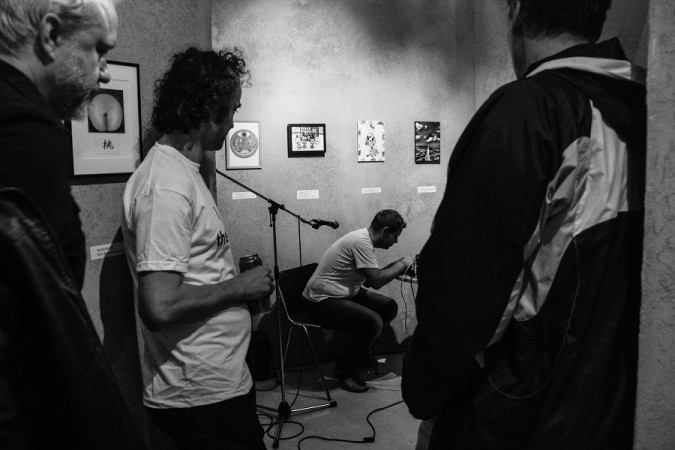 “Shimbun Onna Gallery is a non-profit gallery, which is why its permanent clientele engaged itself within it. On Mondays, for example, the gallery is ran by Yuki Maiko, a professor of English /…/ ‘This space is really something special. Walls are not plastered and it is actually kind of neglected, which is precisely what makes visitors relaxed, outspoken, honest and open. One can easily find a soulmate here’, explains Maiko, who met her significant other at the gallery, with ten other couples also forming there. Visitors are first cleansed of all negativity at the entrance with salt in small cups, and there is a Shinto deity watching over them from the altar under the ceiling. Supposedly the deity already rose in anger once. ‘A visitor, who was standing under the altar, complained that someone keeps poking her in the back, although there was no one behind her. We first blamed a painting that hung on the wall. After we removed the painting, the poking immediately subsided’, explains Maiko. And all of a sudden, during our conversation about these wondrous and strange tales, a weird atmosphere sets over the copy of the small Japanese gallery. All three women get misty-eyed and all doubt is gone that the energy and madness from distant Osaka have now truly settled in Ljubljana.” (Tina Lešničar, Delo Newspaper)

Parallel to this installation, the second space of the Match Gallery explores the duality in the position of the Japanese artist-worker through a series of photographs taken by Toshi Nishida, a “social photographer”.